He Says: Descriptions are Lies, But Describe the Night is Truly Poetic 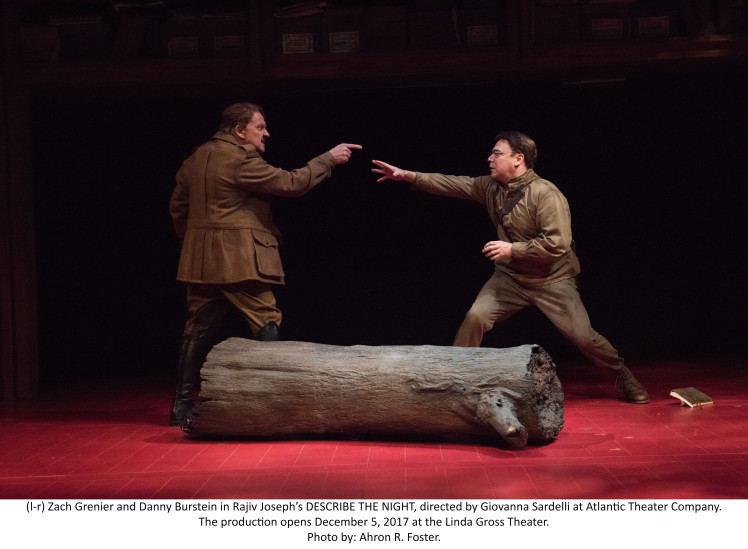 He Says: Descriptions are Lies, But Describe the Night is Truly Poetic

As those first words are spoken over the sounds of crickets and the cello playing softly in Rajiv Joseph’s new play at Atlantic Theater, the simple poetic beauty of the moment fills the space with a glorious openness of possibilities. It gives no indication about what is to follow, and as each character in the finely crafted epic play, Describe the Night enter and weave this rich story together, we are drawn in, bit by bit, never really able to see the grandness of this structurally solid play until the final scene. And then it all come together, shockingly. Maybe a bit too tidy in its human connection component, but the play’s intricate and finely woven plot outweighs the contrivance of the intertwined relationships, leaving us fully enthralled until the elegant ending.

The actors come together solidly, creating such intense moments by enriching their characters with uniqueness and humility. The range of emotions that rattle out from their souls is so human and basic, yet so captivating. Ideas revolve around the telling of lies, the clarity of the truth, and the confessional aspects of both. Sometimes the characters slip into exaggerated postures, especially on the physical level, bending over a bit too far or falling and flailing dramatically, but the connections to one another feel true and powerful. The always awesome Danny Burstein (Broadway’s Fiddler on the Roof) as the emotional trunk of this tree, plays one of the true great Russian writers of his time, Isaac Babel, whose history is as compelling as this play.  Burstein positions himself throughout this time-jumping story as the moral but complex grandfather of all that comes after. It’s a beautiful emotionally-centered performance, especially during that first scene with his polar opposite, the Soviet Stalinist, Nikolai Yezhow, played with a perfectly calibrated over-the-top sense of glee by Zach Grenier (Broadway’s 33 Variations). Their comrade engagement is the soil of this story, enriching the growth of this family tree up and outwards. Tina Benko (Shakespeare in the Park’s Julius Caesar) as the wife, mistress, and grandmother, Yevgenia fluctuates broadly from charming young thing to a frail but strong-willed matriarch and protector.  It’s a powerfully done transformation, right before our eyes, and doesn’t hint at her power and resolve that will come.  From these three, who find themselves intertwined in love and attachment, all else branches off into an intricate canopy of Russian history flowered with love, betrayal, and intrigue.

Over the course of 90 years, Describe the Night, as directed by Giovanna Sardelli (Cherry Lane’s Huck & Holden) playfully and earnestly tries to discover the complexities of truth and lies.  In 1920, the Russian writer Babel wanders the countryside, meeting a soldier in the Red Cavalry, who despite their different descriptions of the night and their ideas of what writing can be, form a bond that will lead them blindfolded through years of friendship and betrayal. “Never confess” says the one, before demanding just that from his friend. In 2010, a reporter, beautifully played by Nadia Bowers (New World Stages’ Church and State) tries to find shelter in a car rental office, run by a scared and intense young man, perfectly portrayed by Stephen Stocking (Mark Taper Forum’s world premiere of Rajiv Joseph’s Archduke). Terror and fear surround them in that dismal airport office after an plane carrying most of the Polish government crashes in the Russian city of Smolensk. But a book given from one person to another connects the past with its memories and descriptions, to future repercussions beyond the imaginable.

Years later, an aggressive KGB agent by the name of Vova, portrayed with a thug-like nervousness by the very good Max Gordon Moore (Broadway’s Indecent) spies on a young woman in Dresden who is connected quite intimately with Isaac, Nikolai, and Yevgenia. She, the wild eyed Urzula, played with a golden voiced power by Rebecca Naomi Jones (MTC’s Murder Ballad) will do just about anything to find her way out, when the time is right, even if it means abandonment of her grandmother. Set in Russia over the course of 90 years, played out on a beautifully constructed set by Tim Mackabee (Roundabout’s The Last Match), with costumes by Amy Clark (Himself and Nora), lighting by Lap Chi Chu (PR’s The Wolves), and a spectacular original music and sound design by Daniel Kluger (ATC’s Animal), this intelligent and powerful new play by Rajiv Joseph (Guards at the Taj) follows the twists and contours of these branches of Russian history, edited myth and dense conspiracy theories.

I couldn’t help but draw parallels to Stoppard’s epic scope and connection to history that were on display in his 2007 masterpiece, The Coast of Utopia and his study of Eastern Bloc Czechoslovakia and the Velvet Revolution of 1989 in his equally compelling play, Rock ‘n’ Roll. Mix that with intricate poetic richness and humor found in Tony Kushner’s Angels in America and Homebody/Kabul, and you’ll get an idea what it feels like watching the stunning new play, Describe the Night. “Descriptions are lies”, one character says to another, yet facts represent the truth, but lies can become truth if written down. These are the complex truths told by Yezhov, the chief of the soviet Secret Police and close ally to Stalin from 1936-38. The same ideas, told by a man who would subsequently be arrested and executed in 1940 by Stalin, removed and erased from official photographs and records after his death, speaks volumes to our current political storm that is thundering over America. But this play is about the Soviet Union and Russia during the times of Stalin and Gorbachev. ‘Glasnost’, the Russian word for ‘openness’ doesn’t play well in Rajiv’s world of falsehoods in this timely play. But it is no lie to say how funny and touching, smart and engrossing, and powerfully exciting and engaging Describe the Night is. That is the truth, I tell you, and because it is written, it must be.

Suzanna BowlingJanuary 24, 2023
Read More
Scroll for more
Tap
The Black Glove: Not a Children’s Show
She Says: Describe The Night Fails To Illicit Any Kind of Emotion