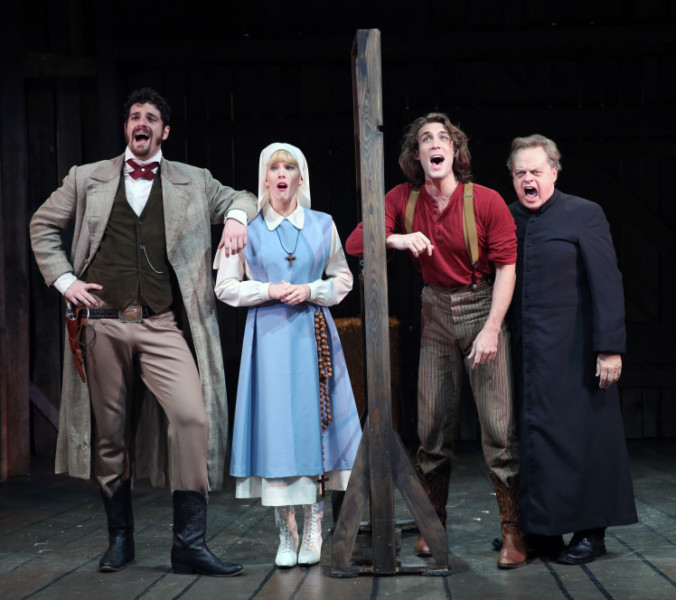 He Says: Desperate Measures: Brooks & the Bard Would Be Proud

He Says: Desperate Measures: Brooks & the Bard Would Be Proud 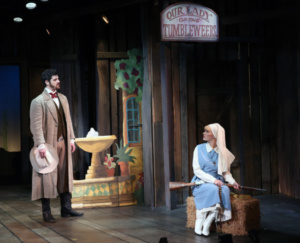 If you took a spoonful of Mel Brook’s ‘Blazing Saddles‘ and stir it into the musical, The Robber Bridegroom and mix it half and half with a smart slice of Shakespeare’s Measure for Measure, the concoction you might just create, if you’re extremely lucky, is York Theater Company’s Desperate Measures. With a book and lyrics by Peter Kellogg (Anna Karenina) and music by David Friedman (Money Talks), there is a wise and solid reason to only use the word ‘Measure’ once in the title.  It’s like Kellogg sliced away a lot of the convoluted plot points of Shakespeare’s Measure and held onto the more interesting narrative stirrings.  Gone is Duke Vincento, a very central character in the Bard’s tale, who gives all his power temporarily to the strict and religious Judge Angelo, for reasons unknown. He then tells everyone he is leaving town, but stays disguised as a monk, to watch what happens. It always struck me, no matter how well a production set this up, that the Duke is sorta horrible, playing with human lives just for observational pleasure.  Like a video game but with real humans.

Stepping in for Shakespeare’s Claudio, is the town’s sweet, sexy, yet simple Johnny Blood, played by the wonderfully voiced Conor Ryan (Second Stage’s Invisible Thread) a dead-ringer (maybe it’s the hair?) for ‘Blazing Saddle‘s Gene Wilder. He has been jailed for shooting a man in defense of himself and the woman he loves, the Madeline Khan stand-in, Bella Rose. It’s a much more appropriate wild west scenario, than the Shakespearian pregnancy clause, and one that has a lot more fun stirred into it, especially in the opening number. Their priceless rollicking number, “Just for You” is over the top fun, and binds them together as equal and perfect matched comedians and love partners. Bella, played by the hilarious one-half of the acclaimed and beloved comic pop-duo, The Skivvies, Lauren Molina (Broadway’s Rock of Ages)  gets a grand number all to herself, “It’s Getting Hot in Here” that almost rivals Khan’s magnificence in Saddle’s “I’m Tired”. But Molina is anything but tired, her energy and charm is infectious.

Genevieve Rafter KeddyJune 22, 2022
Read More
Scroll for more
Tap
Nominations For The Best of The NY Summefest
She Says: Desperate Measures Is Just For You