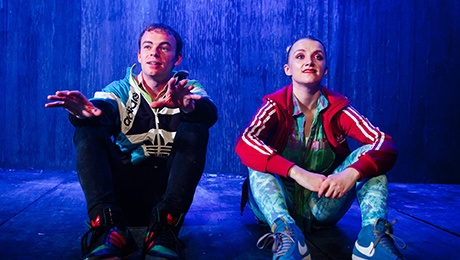 He Says: Disco Pigs A Smashing Punch to Our Collective Gut

He Says: Disco Pigs A Smashing Punch to Our Collective Gut

Ross
After being introduced to the writing of Enda Walsh at St. Ann’s Warehouse a few weeks ago with his strange and exciting Ballyturk, an Irish equivalent to Beckett’s Waiting For Godot, the Irish Repertory Theatre, in celebration of its 20th Anniversary has brought forth a revival of the equally strange and exciting Disco Pigs. To say that I was prepared is a complete understatement as this two handed bit of abstractionism is a whole different kettle of pigs from Ballyturk. It’s equal in its exuberant style and spectacular word play but quite a separate function in its metaphorical examination of life. Directed with staccato precision by John Haidar (Southwark Playhouse’s Last of the Boys), these Disco Pigs have a violence and sexual edge that sneaks up and sucker punches one’s guts and morality. Something Pig would have enjoyed doing immensely given the chance.
Born on the same day to neighboring mothers, these two soul mates feel as bonded as Siamese twins. Their language is a creationist puzzle using a variation of Cork dialect sliced with words, sounds, and phrases of their own making, fortifying these two characters into a unique coupling and separation from the world around them. The writing is both bizarre and exciting, making one lean in hard while also wanted to back away from the discomfort felt. The two, played miraculously by Evanna Lynch (“My Name Is Emily”, Luna Lovegood in the Harry Potter films) as ‘Runt’ and Colin Campbell (Corn Exchange’s Dublin by Lamplight) as ‘Pig’ (the nicknames they have given one another) smash together in punk slang and in body. As they barrel forward with an unstable and unstoppable kinetic force towards their 17th birthday, they assault this Irish town of Cork as if they are figures in a violent video game smashing and stealing all that they want in a drunken wild fit of verbal exuberance, rage, and indifference. The pow and the punch is cartoonish but uncomfortable, courtesy of the stunning movement direction by Naomi Said (National’s Beginning).
Campbell’s energy is thrilling and frightening to watch, and is mirrored hypnotically by Lynch’s wide eyed acceptance. But a shift occurs this time round, severing the complex ease with a jolt of hormonal impulse and an aggressive kiss. It seems once Pig’s intentions of a deeper engagement become clear, their mutual joy in excessive drinking, violent behavior, and ‘Baywatch’ pleasures now has a divergent layer of futuristic meaning. Lynch’s Runt steps back with an uncomfortable nervousness.  She knows, and we see it in her whole body, that Pig is not one to be OK with not getting what he wants. Just ask that store clerk.
The production, designed simply and erotically by Richard Kent (Vaudeville’s Dead Funny), with lighting by Elliot Griggs (Harlow Playhouse’s Peter Pan), and sound design by Giles Thomas (Royal Exchange/Royal Court’s Yen) spins forward like an avalanche attacking a china shop. Banging and collapsing towards the compelling ending of this honest and rebellious story. The struggle to step away from your own personal status quo of attachment with the structure and coping mechanisms of one’s upbringing firmly established, even if it tinged with destruction and violence, is always going to be scary, messy, and littered with carnage, but ‘Runt’ can’t help her compulsive desire for something else, even if it means the imploding of the ‘Pig’. This 20 year old play packs as much disturbing punch as the ones thrown with exuberance by ‘Pig’. Disco Pigs will not be a night easily forgotten.
Related ItemsDisco PigsEnda WalshIrish Repertory TheatreNewRoss
Off Broadway