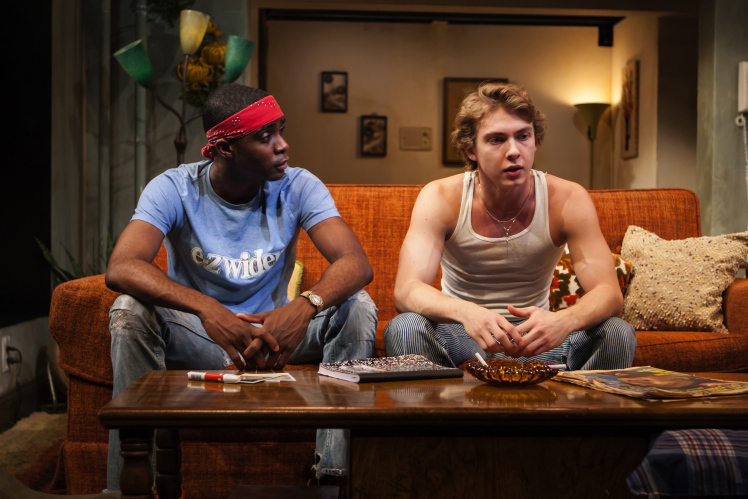 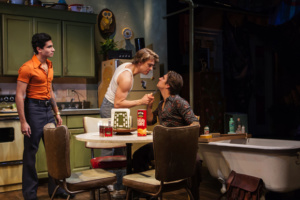 I knew nothing about that hot summer day in 1976 New York City when a mob of young men, all white except for one, gathered together in Washington Square Park armed with pipes and bats, and attacked every person of color they could find. It’s a piece of New York history that isn’t told often. Probably out of shame and discomfort. New York likes to think of itself as beyond such things, but it clearly wasn’t back in the 1970’s, and isn’t now if you look at the spike in hate crimes. Playwright Seth Zvi Rosenfeld (Everythings Turning Into Beautiful) tries to shed light on the then and now in Downtown Race Riot, the new play getting a solid introduction at The Pershing Square Signature Center from The New Group. The play chronicles a personal crisis in loyalty and family that engulfs the Shannon family on the day leading up to this infamous riot. It parallels quite tellingly the tension and rising levels of hate that permeates this country today thanks to the Orange Monster in power, and tries to make sense of what really is important to us all. 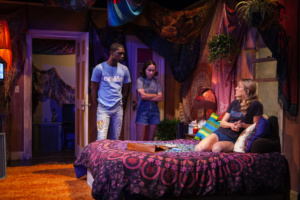 Directed with focus and clarity by Scott Elliot the Artistic Director of The New Group (The Whirligig, Evening at the Talk House), the stellar cast that includes Chloë Sevigny (“Boys Don’t Cry“, TNG’s What The Butler Saw) try its hardest to ratchet up the tensions within this two bedroom apartment in Greenwich Village, beautifully created by set designer, Derek McLane (TNG’s Sweet Charity) and lighting designer, Yael Lubetzky (Broadway’s Russell Simmons Def Poetry Jam). It explores an attempt by a hippy-esque mother, Mary Shannon, strongly played by Sevigny, struggling with her own demons of addiction and abandonment, to bring her two grown children up within a circle of love and acceptance. Her daughter, the creatively constructed Joyce, played with focus and strength by Sadie Scott (“CRSHD”) has an open mind but a negative view of this life and a strong desire to disconnect from her upbringing. Mary’s grown son, Jimmy “Pnut”, portrayed with an authentic swagger by David Levi (Off-Broadway’s 2016 Death of a Salesman), seems to have digested some of those feelings of acceptance within the racist world he lives in, but his rage against society still seethes under his skin. His best friend, Marcel “Massive”, portrayed with a simple elegance of naivety and charm by Moise Morancy (“Happy”), is the one black man who wants to be included within Pnut’s tribe even when the racial hatred that will be enacted upon later that day will be against the black community. His rationale is that the black community never embraced him like this family and the band of young men he calls his friends, and therefore he owes them nothing in terms of allegiance. Little does he know, that the very tribe he believes he is a part of has some other plans for him, and it basically falls on Jimmy to try to alter the planned and violent outcome that is slowly approaching. 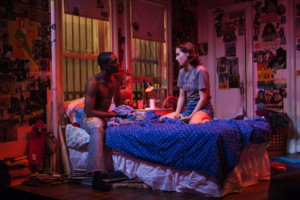 Stuffed into this overly complex and fictitious scenario, is a seemingly banal plot of Mary, who is jobless and on disability, trying to further exploit the system by suing the city for lead poisoning of her obviously healthy teenage son. It seems to be trying to show us that even those with a solid education and in a position of authority are as messed up as those struggling to make ends meet. Bob Gilman, the lawyer, played with a comic edginess by Josh Pais (“Synecdoche”), who the mother has enlisted using everything she has in her arsenal, stops by the apartment with more on his mind than a civil lawsuit. It’s a distraction to the building tension within this time-is-a-ticking structure. It doesn’t help keep us tuned in completely to the dynamics even as it’s being funny, diverting, and telling, but Mary and her son’s traits have been pretty solidly constructed by this point, so in the end, it feels pointless. 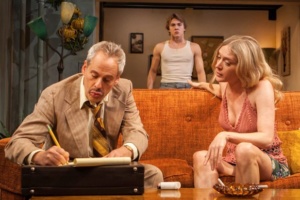 It’s a strange brew that is being constructed. The time period is solidly executed, thanks to costume designer Clint Ramos (Broadway’s Once On This Island) and sound designer M.L. Dogg (Public’s Here Lies Love), and while the cast, which includes two other angry young men; the handsome and intense Cristian Demeo as Tommy-Sick and the less defined Daniel Sovich as Jay 114, do their job with intensity and focus, the play never really feels urgent or dangerous. I’m not entirely sure why it doesn’t register as fully authentic, but my guess is that somewhere the real emotionality is lost in the overly wordy dialogue. The framework and the dialogue never really bring this drama completely home. The ending, which should have felt powerful and thrilling just left me wanting a tiny bit more to chew on. The adrenaline of a riot never heats up within the lives of these West Village residents. Downtown Race Riot never feels entirely real or as edgy as what we can read about that hot summer day out on the streets of downtown New York City. It never feels like this Riot gets going.