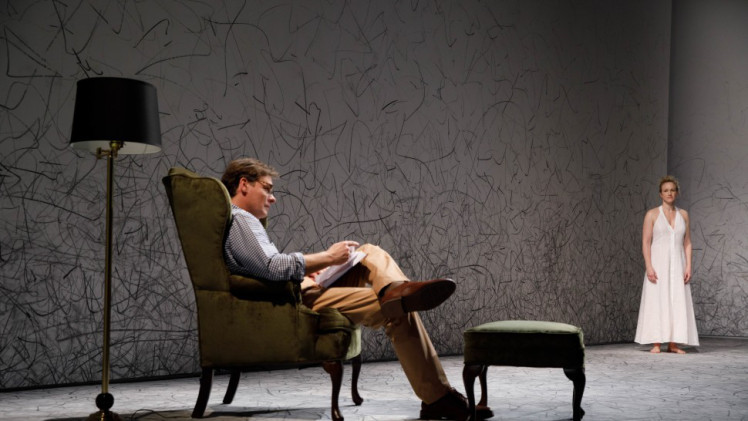 He Says: Edward Albee’s At Home at the Zoo: To Be or Not To Be An Animal or Vegetable

He Says: Edward Albee’s At Home at the Zoo: To Be or Not To Be An Animal or Vegetable

Making his Off-Broadway debut back in 1959, Edward Albee gave American theater a jolting and surprising great gift in the form of his visceral, award-winning one-act play, The Zoo Story. The play, having been first rejected by numerous American producers was forced to be performed for the first time over in West Berlin at the Schiller Theater Werkstatt in 1959. And much to the surprise of all those producers who initial said, ‘no’, it went on to win the Obie Award for Distinguished Play and Distinguished Performance for star, William Daniels when the play finally got its much deserved premier Off-Broadway at the Provincetown Playhouse in 1960.  Years later, after having nagging thoughts about the shallowness of the part of Peter and the perceived lapses that existed in The Zoo Story, Albee wrote another one-act play, a prequel by the name of Homelife to fill out the scenario, and gave them a world premiere under the broader title, Peter and Jerry at the Hartford Stage Company, Connecticut in June 2004. Now, with a much expanded and more apropos new title, as it always will be by proclamation from the Albee Estate, Edward Albee’s At Home at the Zoo: Homelife & The Zoo Story is revitalized and reborn with a superb cast in this thoughtful and stellar production currently playing at and produced by Signature Theatre, where Albee once was Residency One Playwright (1993-94).

This dual scenario exploration of the animal that resides in the modern human deconstructs all the themes that Albee first concocted in his 1960 ground breaking one-act, but under the smart and solid direction of Lila Neugebauer (PR’s The Wolves), these ideas of isolation, loneliness, social disparity and the dehumanization of our population get an added layer of dissatisfaction and animalistic urges that are lying just underneath us all, natural and desperate but afraid to see the light of day. The magnificent Katie Finneran (Broadway’s Noises Off), as Ann, starts the ball rolling when she walks on stage and makes the unheard statement “We should talk” to her reading husband, Peter. The statement (or was it a question?) bounces off the wonderfully designed back wall of scenic designer, Andrew Lieberman’s (NYTW’s Othello) abstract and sparse creation that shrinks the expansive stage into something quite intimate, and falls dead on the floor before her. Peter, played with a simplistic and pleasing charm by the wonderful Robert Sean Leonard (Stoppard’s The Invention of Love) finally comes into the moment and is puzzled, “What?” he replies, but she has already gone back to whence she came.

What transpires after is the digging deep of two people, a ‘happily’ married couple, struggling to understand one another on a whole different construct.  There is a beauty in both of them, especially the fantastic Finneran, whose Ann is attempting to connect on a much more complex level of animal instincts and urges. They obviously have a deep care for one another, riddled here and there with some discomfort, but a surprising lack of fearful shame.  She struggles but also talks about what is bothering her, rather than let it be buried under the floor boards. Leonard’s Peter tries so hard to join her, even though he has some difficulty accessing those more base and carnal urges that Ann is trying to express.  He shares two secrets, both are an attempt to appease and engage, both hit on the wrong concept, missing the head of the nail that Ann is so desperate to hit.  She needs something, and it is more than his version of sweet love-making. It is also not about pain or hurt, but something more like the beast inside getting out from behind the bars and roaring, something akin to Ann crawling across the floor like a cat stalking her prey.  It’s a beautifully crafted and performed scene, drenched in desire, love, attachment and everything that is the opposite.

And then he leaves, and goes to the park to sit and read.  Lost in thought and deaf to the world, once again, until he is interrupted, or more like, disturbed by another.  This time it’s not his wife, but a stranger, a man who tells him that he has just been to the Zoo. At first Peter doesn’t react, just like before with his wife. But Jerry, as dangerously portrayed by the very compelling Paul Sparks (Broadway’s Hedda Gabler, “The Greatest Showman“), isn’t going to be ignored.  He needs to be heard, and answered.  He requires a response, an interview, a moment of question and answer, and he needs to tell his story to this man.  For some reason, as if, in a moment of clarity or delusion, he needs this stranger’s help to make sense of things.  Not that we know that from the beginning, his intentions remain unclear until they aren’t, but we do know something is coming, and it is something to be concerned about. It’s a powerfully fascinating nightmare to witness and imagine placing ourselves in the same situation, or it’s an uncomfortable fascination, depending on which kind of bench you like to sit on.

Albee’s first one-act creation is an incredible construction, perfectly orchestrated like a mad symphony leading us toward a smashing ending that will bring down the house.  I have never seen The Zoo Story before, so I was on the edge of my seat, wondering and anxious.  The menacing Sparks guides and delivers us with a strong and frightening hand, not too much of one way or the other, keeping us just off-balance enough to stay alert and intrigued. In many ways, Ann and Jerry could have been the new title of this partnership as these two talkers are both the focal point of each. Peter is the lesser of these characters in both pieces, and although Leonard is beautifully subtle in his depiction and suppression even with the adding together of the two interactions that has given him more shape and color, his stance is always the listener and the receiver, rather than the active animal fighting to be seen and heard. Maybe that’s the point Albee is going for.  In some ways we all are Peter, sitting and listening, wondering how to react; trying hard to stay attuned and keep the animal alive within but caged until it is needed, to satisfy our partner, to claim our space in the world, and to fight for that place in the world if necessary. But most importantly, not turn into a boring old textbook or over cooked dinner vegetable.

Suzanna BowlingJanuary 15, 2022
Read More
Scroll for more
Tap
Meet The Cast of The New Off Broadway Musical Goldstein
Dancers Over 40 Brings Bebe Neuwiirth To Host the 40th Anniversary and Reunion of the Original Cast of Bob Fosse’s Dancin’