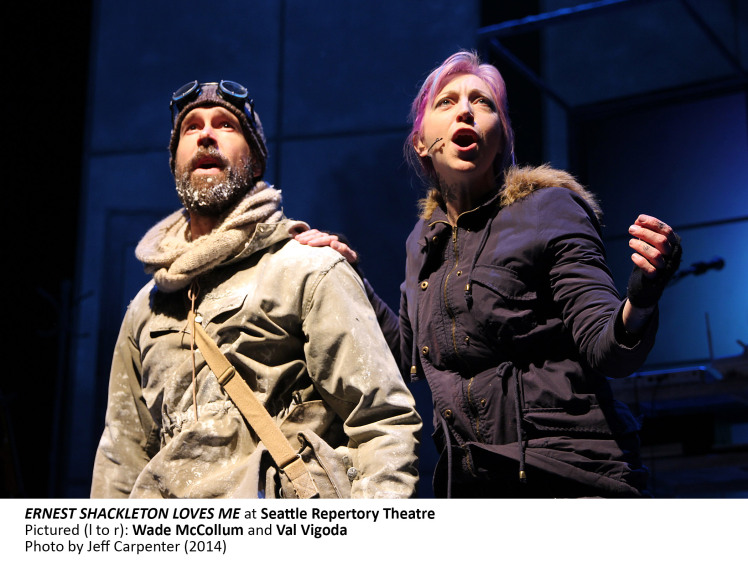 He Says: Ernest Shackleton Loves Me “Don’t Stop Believing” in Your Inner Optimism

He Says: Ernest Shackleton Loves Me “Don’t Stop Believing” in Your Inner Optimism 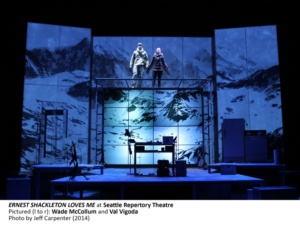 It’s no surprise that one of the characters in this whimsical musical is in a Journey cover band on tour (there will be links to Journey songs throughout this review, forgive me). The whole idea of a ‘not-really-Journey’ Journey cover band is the perfect metaphor for Ernest Shackleton Loves Me, the new musical that just won the 2017 Off Broadway Alliance Award for best new musical. The epic journey that Kat, played impressively by the crazy talented Val Vigoda, goes on flies in the face of reality.  The show asks us, quite insistently, to suspend our disbelief and just go with it. “Don’t Stop Believing” as she is told later on by her loser boyfriend.  In essence, we are being asked to believe, “Faithfully“, that a man who died a hundred years ago, the great explorer Sir Ernest Shackleton, can call up Kat via Skype, and become the romantic interest of a modern day single mother living in Brooklyn. And lead her back to herself. 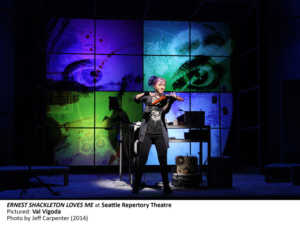 When we do believe, with “Open Arms“, setting aside our need to comprehend, this musical, directed with quirky charm by Lisa Peterson (NYTW’s An Iliad), is just the kind of escape we need. Not an ounce of political presence here, just lots of impressive singing, snowy adventure, and some fantastic electric violin playing by Vigoda (who is just thrilling to behold). Jumping through the refrigerator vortex of time, we have Sir Ernest Shackleton, played with a robust and wildly exciting presence by Wade McCollum (Broadway’s Wicked), arriving just in the nick of time to help the floundering Kat in her epic journey towards self-reliance and internal validation. She’s a struggling artist, writer, and performer, with a crying baby in the other room of her cluttered Brooklyn apartment (a functional, sometimes beautiful production design by Alexander V. Nichols). It’s a lonely existence, like floating perilously through the frigid waters on unstable sea ice in hopes of finding land. 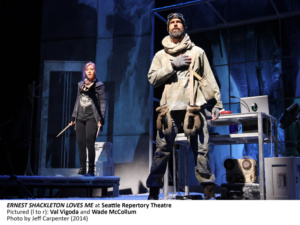 There are so many parallel processes going on within this smart musical, with a sassy book by Joe DiPietro, powerful music by Brendan Milburn, and snappy lyrics by Vigoda.  Shackleton brings the courageousness of an explorer into the heart of Kat, who’s musical career struggles and single motherhood are crushing her hope and optimism at every turn. “Any Way You Want It” is the metaphoric theme song, with similarities of what Shackleton summons within himself in 1914 to survive his epic adventure through the Antarctic, perfectly compared to the challenges facing Kat in Brooklyn, circa 2017. 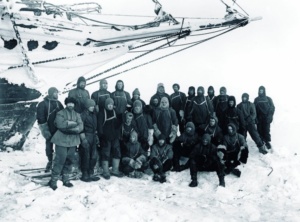 Sir Ernest Shackleton (1874-1922) is widely known for his courage, leadership and unfaltering optimism in his famous Antarctic adventure (although he never did achieve his personal dream of being the first to reach the South Pole). After his ship, the Endurance, was crushed in the middle of its 1,800 mile journey, he never gave up his quest to return himself and his crew of 22 men to safety after being stranded on the deserted Elephant Island. In Ernest Shackleton Loves Me, Kat is the one who helps him cross 720 miles in one of the greatest open water traverses in history, scale the previously unclimbed snowy peaks of the remote but inhabited South Georgia Island with nothing but 50 feet of rope and a carpenter’s hammer, and sail back to rescue his crew that were left behind. Because, “When You Love a Woman” anything is possible, or should I say, when you learn to believe in yourself, in the same way Shackleton loves Kat, icy waters and snowy mountains can be crossed, and all can be saved. Kat needs to find her own inner ‘StarBlazer’, and McCollum’s Shackleton (and the numerous other parts he plays with solid effectiveness) is just the man to guide her through her journey forward.
It’s a smart layered creation, a bit weak in its overall impact, but thoroughly engaging in the moment.  The two leads have expressive and majestic voices that only get better and better as the adventure moves forward.  Their abilities help carry us through some of the lesser songs, and McCollum’s acting strengths ushers us past the more awkward moments in the story telling.  It’s infectious to partake in Kat’s journey, and experience her mind-blowing musicality both vocally and with the electric violin.  Vigoda has the ability to hold our attention with ease, as she does during the chaotic and less well structured beginning moments of this story. A stronger dramatic restructuring at the beginning would help this piece transverse some of the rockier terrain it has created for itself. When Ernest and Kat do go their “Separate Ways [cause they are] (Worlds Apart)” (my last use of Journey song titles, I swear), the life lessons are learned, Kat’s strength and optimism has been restored, and my curiosity in this spectacular journey has been electrified. I couldn’t wait to get out and google the exploits of the very real Sir Shackleton and read about his adventures in the Antarctic.  That story of adventure and survival is thrilling, almost as epic as the one we just witnessed. Almost.
So for more, go to frontmezzjunkies.com
Related ItemsBrendan MilburnErnest Shackleton Loves MeJoe DiPietroLisa PetersonNewRossVal VigodaWade McCollum
Off Broadway

Stars In The Alley Celebrates The Best of Broadway
The Drama Desk Awards: And The Winners Are