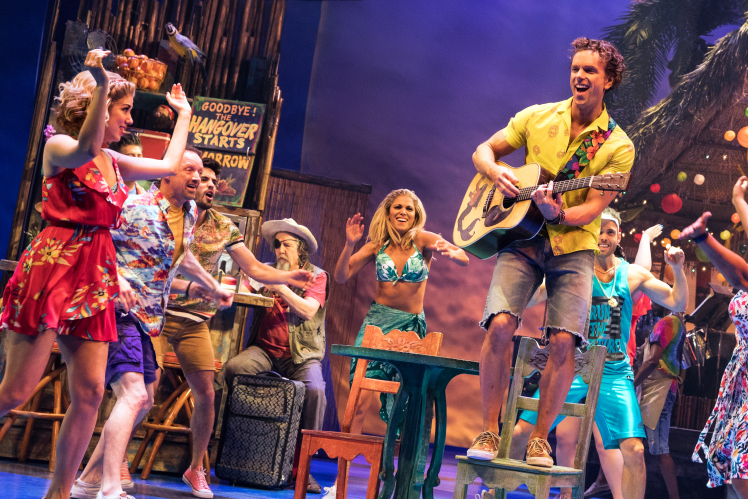 He Says: Escape to Margaritaville: Island Breezy Fun (But Beware the Hangover the Next Morning)

He Says: Escape to Margaritaville: Island Breezy Fun (But Beware the Hangover the Next Morning)

There are odd bits and pieces here and there; dancing clouds, trippy businessmen, sweet gay tourists (I happily think I saw), and a strangely designed plane, left for us to try to sort out and make sense of. There are some clever bits of action and dialogue pulled out from the lyrics and tossed back at us with a big wide wink that give a chuckle, and the playful jokes are obvious but funny.  The all-around handyman/dishwasher/masseuse, Jamal, played with a tropical twang and broad silly appeal by Andre Wark (Broadway’s Something Rotten!) saunters in and out, cracking a joke, and singing some enjoyable songs but most of his moments, and a few other scenes throughout, feel overly complicated, pointless and discardable.  He is given a great song, “Volcano” to start the second act with, and as the others scamper around him afraid of what is coming, he holds our attention center stage with ease and charm. That’s basically how the whole second act starts to feel.  The story lines start climbing on top of one another, and instead of getting untangled under the “Moonstruck” sky, they seem to become more and more complicated and convoluted the further you travel away from the island.  One starts to wonder how the book writers and director, Christopher Ashley (Come From Away, Memphis) plan to tie this all up in the end. Instead of trusting in the construct of love they have steadily created with Rachel and her “10 Things I Hate About You” reasons for saying ‘no’, Escape to Margaritaville adds a twist that doesn’t fully resonate, something along the lines of ‘love won’t come to you unless you are a successful award-winning singer/songwriter’, and not just a beach bum on an island singing “It’s Five O’Clock Somewhere” drinking songs to tourists. Tully’s second act rise is as fast as Rachel’s first act fall into his loving arms, and although somewhat insulting in structure and meaning, the two leads, filled to the brim with awesome talent and incredible voices, sell us their story solidly and with the ease of a good bartender serving up a “Cocktail” like Tom Cruise.  Without the four leads at the wheel of this thing, this trip with the free wheeling Buffett might have been a disaster, “Definitely, Maybe“.

Jimmy Buffett says “Pure Fun”
The book by Greg Garcia (TV’s ‘Raising Hope‘) and Mike O’Malley (Showtime’s ‘Shameless‘) doesn’t complicate things too much in the beginning, following the wise instructions from Tully himself, “the deeper you go, the less interesting it gets“, but for act two, the tequila must have gotten to their heads. Two much sugar and not enough sass leads them down to a Mamma Mia 2 Here We Go Again style finale, back on the island and a wedding to be had.  I’m not sure it had to go down that often trodden pathway to the alter, in the same way that so many of the elements feel borrowed and blue, much like the cute tap dance number, and the island ceremony in the final scene, but we knew somehow we would have to make it back to the beach for the finale. This show couldn’t end in the cold, but I did start to feel a bit of the headache coming on early with this oh-so-typical device and the winding island road we had to take to get there. You do walk out though, sun-drenched and feeling good, with the classic Jimmy Buffet song, “Margaritaville” lodged solidly in your head, so you know this has been a job well done, or should I say, a sunny island vacation done right. We might regret the amount of tequila-laden sugar we had to swallow to get back there, bemoaning the throbbing in our head the next day, and cry out “My Head Hurts, My Feet Stink and I Don’t Love Jesus” anymore, but that beach party was pretty darn fun and pretty much worth the flight. Even if I don’t remember the details the day after.