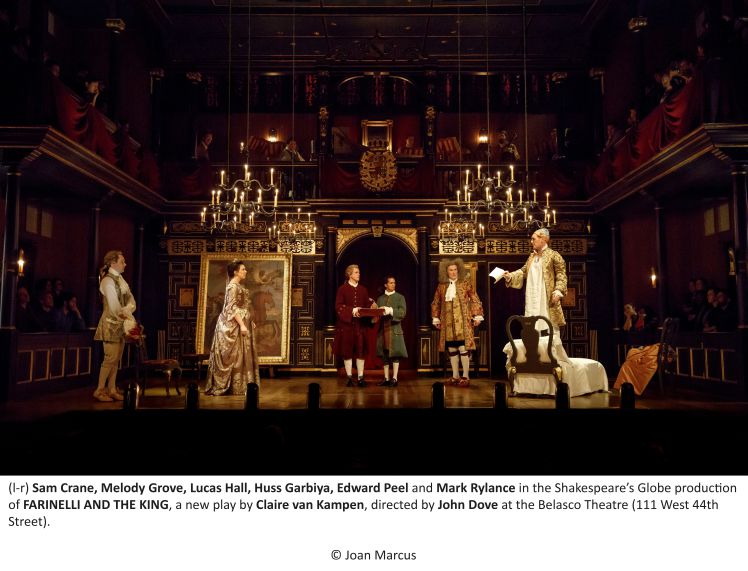 He Says: Farinelli and the King: The Man and the Singer Heal a Monarch, Majestically.

He Says: Farinelli and the King: The Man and the Singer Heal a Monarch, Majestically.

Ross
It was the summer of 2015, when I found myself standing outside the Duke of York’s Theatre in London’s West End looking at the placard advertising Mark Rylance (Nice Fish, Jerusalem)  in the new play, Farinelli and the King. For whatever reason, (I don’t think it had started just yet) we were unable to see it then or there. Actually, now that I know more about this exquisite candle-lit production, I would have loved to see it at Shakespeare’s Globe before it transferred to the West End where it had originated. How beautiful it must have been in that setting, and although this is a new play, written by the often collaborator (and wife) of Rylance, Claire Van Kampen (director of Nice Fish), it feels like it was created by this first time playwright exactly for this type of historical old world setting. 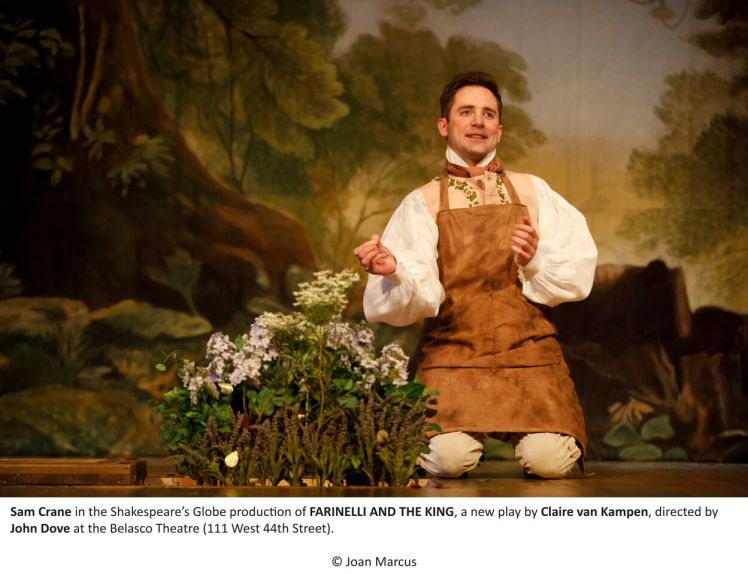 Everything about this production feels old fashioned, and I mean that in the best of possible ways. The design of the set by Jonathan Fensom (Broadway’s Journey’s End) feels straight out of a theatre history text book with a beautiful use of painted drops lowered down by visible thick ropes that look like they are from over a hundred years ago. The Belasco Theater stage has been basically converted from a beautifully old Broadway house to a pseudo-historical Globe-like setting, with audience members stationed on two levels of seating in both wings of the stage. The lighting, by self proclaimed candle- expert and designer, Paul Russell (Young Vic’s Romeo and Juliet) leans heavily on the soft flickering of the numerous candles that light the action. The wigs and makeup by Campbell Young (Hello, Dolly!) are gorgeous and perfectly period. The lush mood created by all these elements feels old world, as if we are watching an old film from a bygone era. The story is simple and charming, and even though it’s not captivating, it does truly engage. It has a glow and a quiet intimacy that is unquestionable and stunningly beautiful.

Rylance himself gives off an old school actor vibe that is just as appealing and engaging as the play itself. He seems like just one of the team, rather than the award winning stage and film star name and above-the-title main draw. And his performance as Philippe V, King of Spain, grandson of France’s king Louis XIV, is beautifully funny and emotionally rich and textured. His hesitations, his meanderings, and his comical asides work its magic on us, drawing us in and creating a solid emotional bond between King and his ‘audience court’. It is sure to become another nominated performance for an actor who gives off the energy that awards are his least priority, but being part of something smart and special is really what it’s all about. And with Farinelli and the King, he truly is.

Farinelli, the most celebrated Italian castrato singer of the 18th century is in some ways the real centerpiece of this play.  Portrayed by a pair of performers, the man, whose real name is Carlo Maria Michelangelo Nicola Broschi is played beautifully by Sam Crane (West End’s 1984, Netflix’s ‘The Crown‘), while the opera singer, the pseudo-twin and other half of his complicated personality, is sung by the astounding Iestyn Davies (New York City Opera’s production of Handel’s Partenope). Many audience members questioned that choice during the intermission of Farinelli and the King, wondering if Davies wasn’t up to the acting task of performing both sides of this fascinating man, but the answer is there in the dialogue of this smart play. Carlo Broschi, the simple man behind the voice, tells of his discomfort in the role of opera singing star or as a center-stage performer. In essence, Carlo separates himself mentally once Farinelli’s voice is needed in a performance. It’s almost like he is in the audience himself, listening to that stupendous voice, in awe as much as the rest of us, not entirely sure where that voice is coming from. It’s like ‘split-personality disorder’, an old term, but a good one for this character who is literally and figuratively split in two for our viewing and hearing pleasure, and for his own sanity. 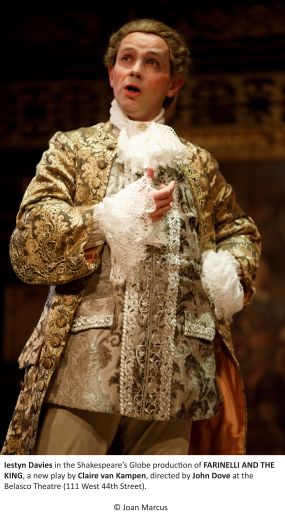 This modest soul, discovered in an opera house in London by the King’s second wife, the Italian-born Isabella Farnese, played with grace and deep charm by the glorious Melody Grove (Traverse’s Milk) is brought to Spain in hopes that his singing may be therapeutic to the mentally challenged King of Spain.  It is said now in the history books (well, in Wikipedia), that King Philippe V suffered from possible Bipolar Disorder, an interesting parallel with the dual personality of Farinelli.  It is also said that even though King Philippe magnificently reformed the Spanish tax code and restored Spanish influence in Italy, he was also known to lay in bed for weeks at a time, sleeping in his own excrement, refusing to dress or speak on his own behalf. Much of that is portrayed beautifully by Rylance with humor, grace, and delusional frustration.  His ability to radiate all those qualities (and more) within one breathtaking first scene between him and a tricky goldfish is truly astounding.  Music therapy, something both Isabella and Queen’s doctor, Dr. José Cervi, played by Huss Garbiya (Globe’s The Frontline) believe in, might be the cure to end his severe depression that cripples her husband and threatens their position. On 25 August 1737, Farinelli was named chamber musician to the king, and criado familiar, or servant to the royal family.

Farinelli became a royal favorite to the King and also a very important person to the Queen. Within that threesome, Farinelli’s influence over the mental health of Philippe V and the royal house was profound and startlingly positive.  Within that very dynamic is where the essence of this play lies. The power of music on our soul, alongside nature and the cosmos reaches parts of our brain that can create a chemical response that will ultimately make us feel better. The idea is subtle and beautiful with the dialogue and the exquisite music (musical arranger: Claire Van Kampen) lifting us up in its magic. It’s a glorious evening at the Belasco Theater, one of my favorite Broadway houses. It glows with an intelligence and wit that exceeds this good but not great play. The vocals sing and fill the space with a wondrous emotional sound that might possibly bring a tear to your eye, especially within the last musical moment. Rylance, much like the history books that state that Farinelli was admired almost as much for his modesty, his intelligence, and his dedication to his work, as his voice. The real life Farinelli, like Rylance, was respected by his colleagues, composers and impresarios, often retaining their loyalty and friendship long after their professional engagements.  Farinelli was said to favor conveying emotion rather than dassle his audience with sheer technique.  This all could be said about Rylance and this play, the man and the project oozes dedication to craft and intelligence, alongside a low-key attitude towards the work.  It’s a pleasure to be in the audience of someone so talented and dedicated who is there to entertain. The complexities and depth he, and the company bring to Farinelli and the King is equal to the beauty that engulfs us leaving us feeling quenched and delighted by the exquisiteness of an evening of beautiful theatre making.

Magda KatzJanuary 6, 2022
Read More
Scroll for more
Tap
Hundred Days Learning To Live Without Fear
It’s a Wonderful Life (The Radio Play) When I Get to Watch This and A Christmas Story (The Musical) All in One Week