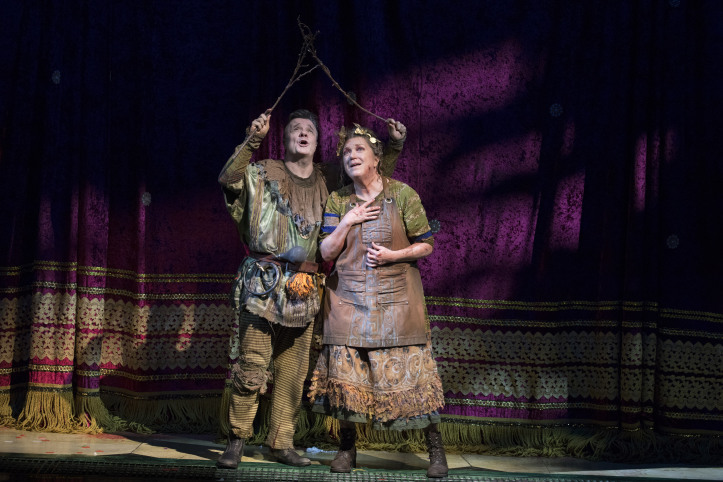 This is pure foolery and fun, this Sequel to Titus Andronicus, namely Gary that is getting a full forced treatment at the Booth Theatre on Broadway. It is by no means your average kinda Broadway play or comedy, that I will tell you first off. From the moment Julie White (Broadway’s A Doll’s House, Part 2, Sylvia) steps out from behind the curtain, sprouting off and on about something or another as Carol, the midwife, one has to sit up straight and wonder how any of these three master comedians of the sorting class can keep a straight face. It’s a spectacle of riveting and ridiculous savagery, hilariously written with bemused wonderment by the whip smart Taylor Mac (HIR, Red Tide Blooming) and directed with a vaudevillian sense of indecency by George C. Wolfe (Broadway’s Shuffle Along…, The Iceman Cometh). White is wickedly Shakespearian in her wonderfulness, and just the right dash of liquid abstractionism to lead us into the bloody mess that awaits us behind curtain number 1. It’s dastardly delicious in its absurdity, craftily crazed but hard to dig deep in that shallow end of the pure waters of brilliant nonsense.

Disturbingly demented in its blood, bile, flatulence, and penile jokes, the comedy spectacle, designed to deadly delight by Santo Loquasto (Broadway’s Carousel), with spot-on lighting by Jules Fisher + Peggy Eisenhauer (Broadway’s Pippin) and sound by Dan Moses Schreier (Broadway’s Falsettos), brings forth the clowns one by one as summoned with Nathan Lane’s (Broadway’s Angels in America) Gary in the lead, with Kristine Nielsen’s (Broadway’s Present Laughter) Janice overtaking and demanding the authority of folly. They both deliver and speechify at the highest of the low order, all to the sound of applause; much deserving. He’s a clown who hates clowns, but he’s also one with a fool’s ambition. Ridiculousness, or so thinks Nielsen’s gloriously cantankerous cleaning lady, with a resume of orderly perfection to prove it. They have come together, summoned by Emperors to clean up the mess created by this little mission of the revenge of the revengers, and we couldn’t be more pleased with their arrival.

“Did someone say pie?” and all of a sudden we are re-blessed with the wondrous White and one strange and marvelous floor show that takes us ambitiously forward toward the end of all this everyman clowning about.  “It’s just a theory“, but I couldn’t stop smiling. I did have visions of the magnificently talented Andrea Martin pumping and prodding corpses on stage with Lane, but within minutes of Nielsen and White, I couldn’t envision anyone else. The glee with which they have taken on the challenge, cleaning up a mess left by others, and finding comedic gold is inspiring and Tony worthy. With Taylor miraculously finding the hope and hard truths amongst the dead, this bloody comedy delivers more than just a hefty body count, and even with the jokes being as guttural as they come, the laughs never stopped. Did I understand everything that was going on? Not really, but it was the funniest cleanup crew in the history of Shakespearian tragedy and Broadway comedy. This crew, all around, performing to the dizzying heights of bloody perfection, gives us a master class of geniusness of the art of comedy and the mop.

WriterFebruary 18, 2022
Read More
Scroll for more
Tap
How to analyse what size of generator your need (Kw, Watt or Amp measurements)
The Herb Alpert Award in the Arts Celebrates 25 years and 125 Winners at NYC Celebration