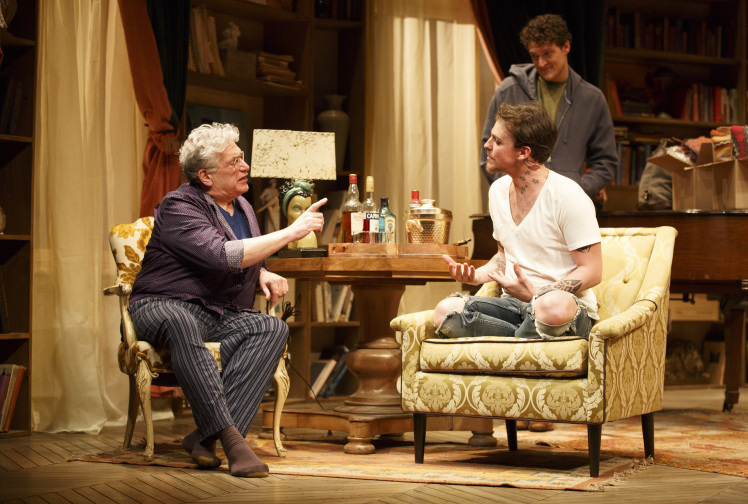 He Says: Gently Down the Stream: Gay History for Liberals

He Says: Gently Down the Stream: Gay History for Liberals 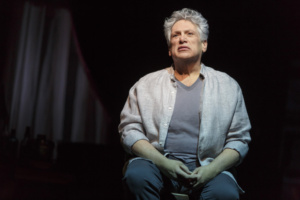 John Leguizamo is schooling us nightly on Latin History for Morons in the Anspacher Theater within ‪the Public Theater complex, trying to condense three thousand years of Latino history into 100 minutes of high-energy festive and informative fun.  In another theatre, the Martinson, delivered by the gravely voiced ‪Harvey Fierstein (a Tony Award winner for both Torch Song Trilogy, Hairspray), we are being taught the history of gay liberation over the last 50 years or so in the beautifully poetic, Gently Down the Stream. Our pseudo-teacher is Beau (Fierstein), a sixty-ish pianist, who grew up gay in New Orleans as the son of a gangster somewhere around the later half of the 1900’s and lived his life playing cabarets around the world. It is through the 2000’s in London that we are invited in to watch him open his heart, once again, with trepidation and unease, to a young very complex man, Rufus, portrayed with fetching appeal by Gabriel Ebert (Fierstein’s Casa Valentina, Roundabout’s Thérèse Raquin). Later on, Beau is challenged to embrace another young man, Harry, played with roguish aplomb by Christopher Sears (LCT3’s The Harvest), into his life.  We are privy to numerous historical monologues of love and attachment, told with brutal honesty by Beau, where we find the core of this sentimental and moving personal tale. 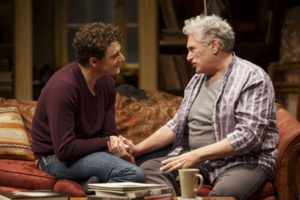 Beau, wonderfully vulnerable and frightened by previous loves and losses, tries valiantly to embrace a new opportunity for romance. We find him living quite comfortably in London in 2001 in a spectacularly soul-telling apartment, designed with perfection by Derek McLane (Noises Off). Within these cluttered walls, Beau invites Rufus in for the first time, happy but wary of this curious young lover. Expertly written by Martin Sherman (Rio Grande, Bent), with an exacting insight into the inner thoughts of a fairly centered out gay man who’s grown up dealing with homophobia through the late 19th century, and come out the other end of the storm. With a smartly scripted first interaction, we are reminded of the time when Google search was a new idea, and as the love story progresses, all the other unfathomable advances in gay culture come into play, such as domestic partnerships, gay marriage, and child rearing.

As directed by Sean Mathias (No Man’s Land starring Ian McKellen and Patrick Stewart), the two gingerly play off each other deepening their attachment over the years, to each other, and to us. Beau shares his tattered memories to this inquisitive young man in numerous interspersed chapters revealing his, and our communal gay history. The deeply personal monologues are filled with love and pain, enmeshed in tragedies of both global and personal dimensions, that tell our story, not just his. The details of our paths to some level of acceptance may be different in location and names, but the pain and joy are easily accessible and relatable. The arrival of Harry is just one more thing for Beau to figure out, and for us to grasp. 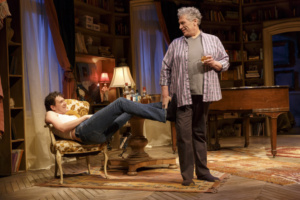 It’s a beautiful written piece that wears its heart on its sleeve, with discomfort and the unease of a skeptical but hopeful romantic. Much like Beau’s imperfect attempt to reconnect with his passionate, loving, and trusting self, Fierstein does an impeccable job reeling us in, and keeping us attached.  It’s not a perfectly crafted story, as it feels like Sherman is trying too hard to check off all the boxes in the history of gay advancements, but it has some quietly touching moments that speak volumes in their simplicity. The ending feels forced, or at least too convenient, but it gives Fierstein and Sherman a beautiful opportunity to wrap things up emotionally and historically.  Even with the slight clumsiness of the last set-up (although the monologue itself is quite moving), I was still happy to be cozied up in Beau’s beautifully appointed London apartment for a ‪Sunday evening lesson for all us Liberals on our shared gay history here at ‪the Public Theater.