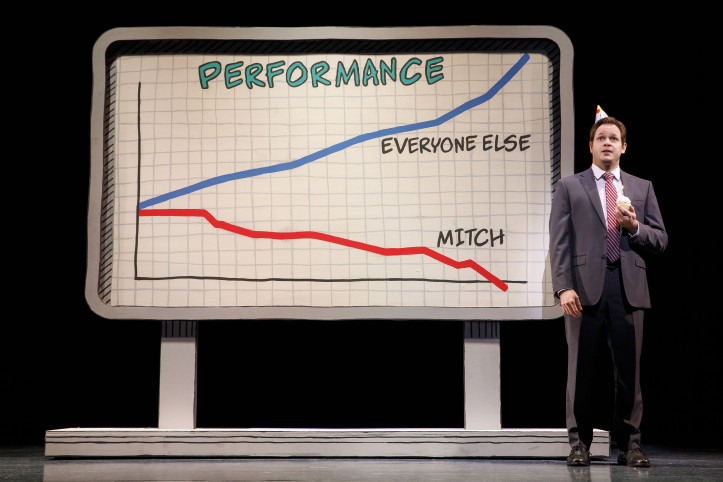 He Says: Gettin’ The Band Back Together For a Funny Show That’s Not Quite Rockin’ Enough For Broadway

He Says: Gettin’ The Band Back Together For a Funny Show That’s Not Quite Rockin’ Enough For Broadway

I was curious, from the moment I arrived at the Belasco Theatre, just how did this brand new musical make it to Broadway. It doesn’t carry with it any pedigree, status, or name recognition, to draw the crowds needed to survive. And that’s the sad truth of the Broadway stage at the moment, whether we like it or not. Stars and recognizable brands.  And with a funny but slight book by both lead producer, Ken Davenport (Off-Broadway’s The Awesome 80s Prom) and The Grundleshotz group of improvising professionals, Gettin’ The Band Back Together comes rocking in with a Full Monty/Kinky Boots/School of Rock kinda feel. It just needs some naked miners in high heels with a back up band of kids and we’d be set.  But this is not the case. It’s a hilariously fun and endearing time, with the rock star spot clearly aimed at the ego-strengthening that is needed by a 40 year-old guy who finds himself fired on his birthday.  And with head bowed in defeat, must return home to Sayreville, New Jersey to live with his mother and lick his failed stock-broken wounds.  The trouble for Mitch Papadopoulos, played to the max by the appealing Mitchell Jarvis (Broadway’s Rock of Ages), is that the future doesn’t look all that bright from the driveway of his old home. It’s sad and bleak, to say the least, just packed with old high school friends, crushes, and competitive rivalries destined to play more havoc with his already bruised ego.

His best high school buddy, the adorable funny goofball who somehow has become the high school math teacher, Bart Vickers, played with fruity-delicious charm by Jay Klaitz (Broadway’s High Fidelity), is thrilled to see him standing outside his mother’s garage door.  To him, it feels like old and better times colliding ahead for this grown-up man-child, who is more than happy to revisit his teenage years eating sugary cereals in the kitchen of Mitch’s Mom.  He’s a bit of a stoner dork, but Sharon Papadopoulos, Mitch’s hot mama, played by the stunning Marilu Henner (Broadway’s The Tale of the Allergist’s Wife) welcomes him back into her home with a warm ease that is infectious.  It’s good to see this smart rock-n-roll woman on stage again after all these years since that iconic television show, “Taxi” that first introduced us to this strong sexy woman, and she is used very well by this show, (which I will now refer to as ‘GTBBT‘ as I just can’t keep typing out that long name over and over again – maybe they should have shortened it up – sorta in the same way this two-act 2 1/2 hour show should have been tightened up to a 100 min one-act Off-Broadway musical). She occupies the space with a much-needed slice of rock-n-roll wisdom and confidence, giving off an appealing sensuality that obviously can’t be ignored. Her singing is a bit less than inspiring but for what she lacks vocally, she makes up with a sassy and strong stage presence.

Then as quick as you can say ‘Dumble-dorks‘, the Battle of the Bands is ignited by the hot and insanely ridiculous (which is a compliment, just so ya know) Tygen Billows, played to hilarious perfection by the chiseled and wonderful Brandon Williams, making his Broadway debut. As lead singer of his own tribute band, he establishes some pretty heavy wagers to entice Mitch back to the stage, all for a small fake gold trophy and the right to call themselves the best band in the area. This battle has been on the back burner waiting in the simple mind of Tygen ever since high school, and even though it doesn’t make a whole lot of sense, logically, we can do nothing else but smile and embrace the fun (or you might as well hop back on the NJTransit and head home). His side kick, the phenomenally funny Ryan Duncan (Off-Broadway’s Alter Boyz) is a dense Mouthfeel attempting to finish his idol’s sentences, a task that is forever needed.  Luckily for us, Mouthfeel hilariously fails each and every time.  His “Best Band in the World” number only adds to the charm of the character, making him feel key to our enjoyment of the archenemy. And then there is the hot woman in the center of it all, Dani Franco, played to soul mate perfection by Kelli Barrett (Broadway’s Doctor Zhivago). She is the one that got away when Mitch left his hometown for the Big City and the Big Job, and naturally, the electric guitar spark is still there.  The two have great chemistry together, Mitch and Dani, especially in the silly “Best Day of My Life” but her “I Just Want Real” falters. She now has a teenage daughter, played most wonderfully by Noa Solorio (Sacramento Theatre’s Mary Poppins) and a boyfriend that will make us all say, “WTF??!??” or maybe, more appropriately, in the husky-voiced words of Sharon, “WWJPD“.

His band mates, one by one, are reunited, even if it takes a bit of cat-blackmail (yes, that’s a thing) to get it done.  We have good guy/bad cop Sully Sullivan, played kindly by Paul Shitty (Broadway’s Once), who’s crushing big-time on the magnificent Roxanne Velasco, (no wonder) played strongly by Tamika Lawrence (Broadway’s Come From Away), who will, for sure, make a much better detective cop than her study buddy.  We also have the slightly wasted Robbie Patel, played with a nerdy sweetness by Manu Narayan (Broadway’s My Fair Lady) who is paired quite ingeniously to the speed-date dynamo, Tawney Truebody, played as true to the name as possible by the gorg Becca Kötte (TV Land’s “Impaster“), against the hopes of Robbie’s traditional father, Dr. Patel, played with stereotypical comedic charm by Nehal Joshi (Broadway’s School of Rock). But even after all that, they are still missing the last band member, a guitar player that has been lost, but found pushing up the daisies, most hilariously thanks to set designer Derek McLane (Broadway’s Noises Off) with appropriately fun costumes by Emily Rebholz (Broadway’s Indecent), and decent lighting by Ken Billington (Broadway’s Chicago).  So a replacement is needed, and with the help of a teacher’s threat of detention, Ricky Bling, a surprisingly multi-layered young rappin’ guitar-genius musician, played lovingly by Sawyer Nunes (Broadway’s Finding Neverland) is pulled into the “Juggernauts” and helps them rock a wedding like no other.  And his meeting of the young minds, with Solorio’s Billie Franco is as perfect a coupling as you could hope for. Mazel Tov and “Hava Nagila” to them both.

So let the games begin, and with songs that play quite charmingly in harmony with the kitschy story, with solid orchestrations by Doug Katsaros (the animated “The Tick“), music director, orchestrations, and arrangements by Sonny Paladino (Stage 42’s Smokey Joe’s Cafe), music coordination by John Miller (Broadway’s Summer), and sound design by John Shivers (Broadway’s Pretty Woman), the overall effect is sweet, joyous, and cute but nothing all that memorable or special.  The best of the numbers, “Bart’s Confession” and the title song, “Gettin’ the Band Back Together“, are all fun and playfully enjoyable, but GTBBT is not quite big enough to fill Hedwig‘s glam-rock shoes he left behind back stage. It’s all good fun though as directed by John Rando (Broadway’s Urinetown), with some rocking but ultimately forgettable songs by Mark Allen (Tinyard Hill, Band Geeks!), with additional material by Sarah Saltzberg (off-Broadway’s Miss Abigail’s Guide to Dating, Mating & Marriage). This group of artists know what they are doing as they put together an entertaining show, but haven’t quite figured out how to make it big and strong enough to be called a Broadway musical. The choreography by Chris Bailey (TNG’s Jerry Springer – The Opera) is joyful but generic, much like the whole rock and roll playlist.  It will make you laugh and you’ll all have a great time, but it won’t stay with you for too long after you make your way out into the wild world of Times Square. GTBBT feels like a bit of a vanity project, destined to struggle to find their audience on Broadway. The lead producer might have been wiser to open his show Off-Broadway in a theatre like the ones at New World Stages where the crowd would feel like they were getting their money’s worth.