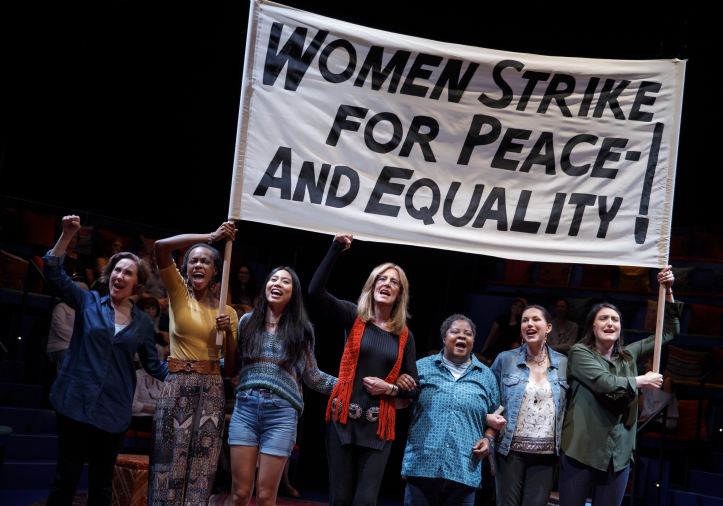 He Says: Gloria: A Life Projected on to the Stage Talking Circle

He Says: Gloria: A Life Projected on to the Stage Talking Circle

Rising out of the pages of Ms. and onto the Daryl Roth Theatre talking circle, Gloria: A Life, a new play by Emily Mann (Having Our Say) stands strong and has a thoughtful and compelling story to tell.  It’s a staged biography that asks us to look out at each other and find shared power. Made flesh and bones by the strong and forceful portrayal by Christine Lahti (Broadway’s God of Carnage) of the iconic woman, Gloria Steinem starts her history lesson in the 1950’s when she proclaims, quite honestly, that she didn’t try hard enough, nor know enough, but the self-described hope-aholic, dances as fast as she can forward to the icon figure that she is today, sitting around intellectual campfires, listening to stories, knowing that she’s not crazy to believe. Directed with force and purpose by Diane Paulus (A.R.T.’s Jagged Little Pill, Broadway’s Waitress), Gloria drives back to her beginning, and walks us through from faux-Playboy bunny writer to her most recent days of star-studded activism and personal iconic status symbol of the feminist movement in a pair of aviator glasses for protection. “The bigger the better. (Beat.) The hair, too. But I don’t want anything to come between us tonight. (She takes off her glasses.) Because here’s the good news—We’re all in this room together and not alone on our computers or cell phones!”

Powerfully written in celebrity documentary style structure, Gloria is glad to show her flaws and fears as badges of honor and lessons learned. The biggest sin, she says, is sitting on your ass, and this motto is supported on all sides by the cast that included; Joanna Glushak (Broadway’s War Paint), Fedna Jacquet (Public’s Ain’t No Mo), Francesca Fernandez McKenzie (Soho Rep’s Lily’s Revenge), Patrena Murray (Public/Delacorte’s A Midsummer Night’s Dream), DeLanna Studi (Primary Stages’ Informed Consent), and Liz Wisan (TFANA’s Winter’s Tale) as almost every strong influence and powerful co-contributor to the women’s movement, and many that tried to stand in her way. And even though, as the playwright states, “if you Google Second Wave Feminism—there’s not one reference on the Wikipedia page to a black feminist.”

“It does not include”

“Alice Walker….and we could go on and on and on.”

With the audience sitting in a fire side circle surrounding a warm and cozy liberation of rugs, cushions, and blocks, courtesy of scenic designer Amy Rubin (Signature’s Thom Pain), with pretty obvious period costumes by Jessica Jahn (Cherry Lane’s One Night), straight-forward lighting by Jeanette Oi-Suk Yew (KPOP), flickering sound design by Robert Kaplowitz (Broadway’s Fela!) and Andrea Allmond, the strong cast of capable and dedicated performers guide us through her historic enlightenment. Gloria flips through the historical imagery and testimonies like we are scanning a Ms Magazine filled to the brim with facts and interviews, reading the headlines and occasionally stopping and studying the feminist facts, reading about both the successes and failures. One great learning moment is the naming of the magazine Ms. a word that means “the exact parallel to Mr‘, a more powerful proclamation than I ever truly knew. With some fantastic period photo and video work projected on the walls by designer Elaine J. McCarthy (Broadway’s Wicked), especially all those magazine covers, the piece feels extremely relevant and particularly educational, particularly the moments of letter readings and testimonials on abortion and letters to the editor.

Intellectually invigorated throughout, I sometimes found myself emotionally put-off struggling to find depth within its historic backdrop. I wanted Mann, Lahti, and company to slow down, take a few deep breaths, and stop trying to inform and teach but engage within the heart and pain of the matter. There was attempts with the mother/daughter interactions, and although symbolically they had great meaning, the writing failed to give it a real earthbound feel to their complicated dynamic, floating on the surface of staged biography moments rather than the deeper painful conflict that is at the heart of the matter.

The taped segments, especially the archival videos of historic speeches are moving, but made me ache a bit for at least one actual video of the real Steinem speaking.  Lahti does a fabulous job bringing the woman to life (to the point where audience members in part two referred to her as if she was actually Gloria), but when the videographer implanted a cutout rectangle of Lahti responding to the famous interview on Larry King Live, it looked oddly fake (in comparison to all the others) and distracting from the internalized message.  In my humble opinion, it was a perfect moment to give us a bit of the real Steinem speaking without detracting from Lahti’s magnanimous performance.  The pictures of her though, standing proudly alongside such trailblazers as Flo Kennedy and Bella Abzug, played joyfully by Glushak, strengthened the connection, and made Gloria: A Life a fitting and full tribute piece worthy of our attention and our praise. Especially in this day and age when resisting and action is required more than ever. That became even more detailed and dynamic during part II, the talking circle when the audience is asked to join in with the conversation. It’s hard to describe, as the stories told the night I went all resonated with more guts and power, registering sometimes more strongly than the actual play and its staging.

My thoughts on that communal space reverberated, and I had a hard time thinking of something that I, a gay, card-carrying status Native American Mohawk/Iroquois Canadian male could offer into the mix, although I was made proud by the beautiful salute to the Cherokee and the Iroquois Confederacy: “I hope some of you know about Wilma Mankiller, Chief of the Cherokee nation. In a just country, Wilma would have been President.” It paralleled in many ways the LGBTQ movement that I personally feel activated by in the same profound way as many of the women in the audience and in the cast.  One of the more beautiful moments presented was the powerful coming together of all women for that historic 1977 women’s conference, where viewpoints and agendas from all walks of life had their say.  ”

GLORIA: “In the end, Coretta Scott King comes forward with her bodyguard—a reminder of past tragedies and present danger.”

CORETTA: “Let this message go forth from Houston and spread all over this land. There is a new force, a new understanding, a new sisterhood against all injustice that has been born here. We will not be divided again.

I ask the delegates— to accept the entire Minority Women’s Plank—By acclamation.“

It reminded me of an interview with the compelling Lea DeLaria, an American comedian and actress renown for her outspoken political-ness, especially around the idea of the LGBTQ community. She rightly questions the inclusiveness of what all those letters stand for and wonders if they do stand for unity.  Do they represent a solidarity of these communities or a categorical separation that hinders itself in its supposed support? I wonder about that, post-show, on the subway home, thinking about the Women’s March on Washington where so many amazing women and others turned out in the thousands world-wide protesting the horrible-ness of the #OrangeMonster and all that he stands for.  I heard many men say, “it’s a Women’s March“, so they didn’t go, but the LGBTQ community turned out strong, linking their arms with the movement against the GOP powers that be.  But months later, when the LGBTQ March on Washington occurred, many women stayed home, saying that it wasn’t their march, or something along the lines of, “I already marched“.  And I get that, sort of.  Protest-fatigue was settling in. But I turned out for both and as many more that I could, trying my hardest to be there protesting for every marginalized group, not just the one that I felt I belonged to.

It’s a strange brew, to find your cause, but also join with a greater cause that doesn’t exactly fit neatly in your persona, but understand the unity of the message, and how it relates to all. Be a proud male feminist, like that wonderful Prime Minister of Canada, Justin Trudeau who calls himself just that, or a gay male who stands with the Trans community and the Lesbian community for equal representation under the law. Or a privileged white woman who can rise up and resist the authorities over unfair immigration and border incarcerations. We need to sit around that talking circle and listen closely, and that find glorious and powerful shared power. I want to be a hope-aholic as well. Will you join me?