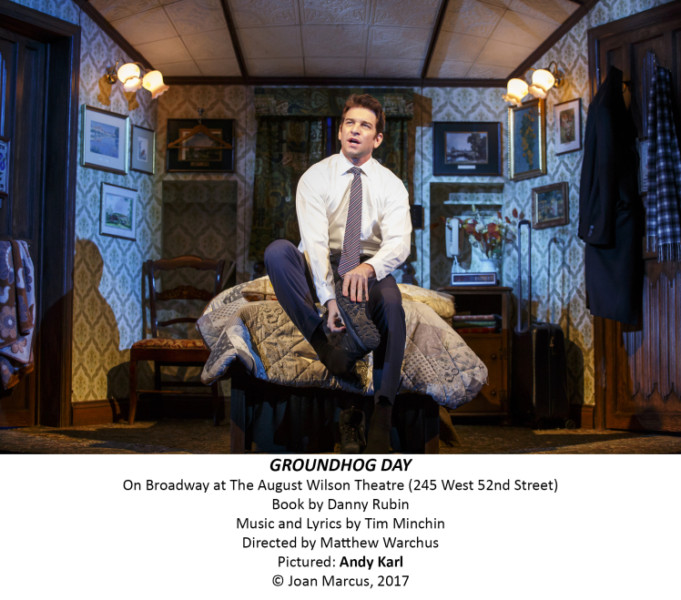 He Says: Groundhog Day What Will Tomorrow Bring If Tomorrow is Today?

He Says: Groundhog Day What Will Tomorrow Bring If Tomorrow is Today? 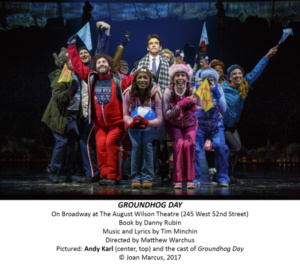 For a weatherman who is programmed to predict what tomorrow will bring, a today that is just a repeat of yesterday is a whole different ballgame. The weather will be the same, naturally, but the day can revolve out in so many different ways. Cloudy and cold is the forecast but this festive new musical is anything but. Based on the popular Bill Murray movie of the same name, Groundhog Day gleefully asks the question, how would we treat an endless cycle of todays that are just yesterdays repeated, with no tomorrow in sight for one very confused soul in need of a reboot. It’s a story that, in an abstract way, only a theatre performer can completely understand. They wake everyday to prepare to do the exact same thing they did at last night’s performance. Be in the same place, same moment, same lines, same dance, same song. Variations exist, slight changes to see different subtle outcomes but the daily routine doesn’t alter too much. They get this concept, and it shows in this very precise and enjoyable show. 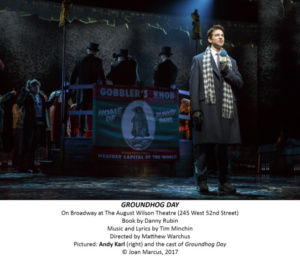 As directed expertly by Matthew Warchus (Matilda, The Norman Conquests), Groundhog Day contemplates that daily rerun scenario on a much grander and deeper existential scale but sadly it doesn’t dig deep into our collective emotional hearts. The new musical, fresh off a few Olivier Award wins just weeks before its Broadway opening (and now has an injured star – hopefully back in the saddle by opening night), captures all the wit and insanity of Bill Murray’s epic turn as a celebrity weatherman on redial.  This go-around, Andy Karl (Rocky, On the Twentieth Century) stars as the arrogant weatherman, Phil Conners, sent against his will to cover the Groundhog Day celebrations in the small town of Punxsutawney, PA, the home of the famous groundhog, Phil. Without any explanation as to why, something truly astounding happens.  Life and circumstance keeps him in a never ending loop waking up every morning to a fresh new Groundhog Day.  Karl wonderfully captures Connors arrogance, exasperation, and confusion at this incredible rehashing of events. Will Punxsutawney Phil see his shadow? Will we have six more weeks of winter? Will Phil the weatherman figure out how to escape his predicament? Time will tell, over and over again. 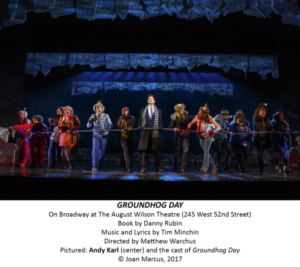 With a book by Danny Rubin (screenwriter of the movie) and music and lyrics by Tim Minchin (Matilda), Groundhog Day keeps repeating itself, over and over again. The songs are more quirky comedy than memorable, but they sure are entertaining for the most part. In the utterly amazing and exacting recreations by this stellar and on-point cast in the hilarious “Small Town, USA” reprises, along with “February 2nd”/”There will be Sun“. Staged appropriately on a complex revolve with a few revolves inside the revolve (scenic/costume design: Rob Howell), the look and design fits perfectly. The seamless re-do’s are superb, thanks to the unique choreography by Peter Darling (West End’s Charlie and the Chocolate Factory, Billy Elliot). His detailed whimsical dance moves on repeat do the perfect job of taking Conners through the exact same moments, throwing him and us into the ridiculously funny experience of finding yourself trapped in the same day. For a show that is a about a day that keeps repeating, it is constantly surprising us by doing something a bit different at almost every turn. 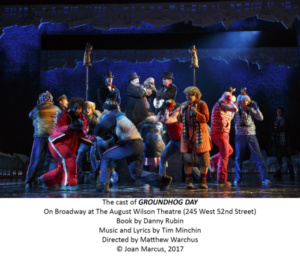 The musical asks the Phil-osophical question, how would we alter how we handled a day, if we could do it all over again? Phil Conners gets that opportunity. He keeps waking to the same radio show on the same cloudy day, wishing for the sun. He keeps repeating his day over and over again but never getting it right, or at least not able to figure out how to do it differently in a way that makes it better or that causes the reset dial to stop being engaged. He learns how to get what he wants in terms of instant gratification, sometimes, but the bigger picture evades him. 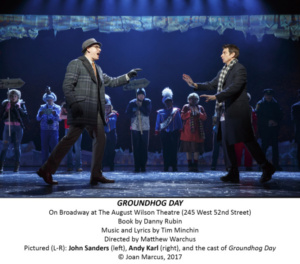 The writers of this musical really get to practice what they are preaching though.  That each and every character, big or small, deserve a moment for us and Conner to get to know them. And in that knowing, all the difference in the world would make. Rebecca Faulkenberry (Spider-Man: Turn Off the Dark) as the pretty blond girl, Nancy opens act II with a beautifully intimate song, “Playing Nancy“.  It’s a bit shocking and awkward at first for the second act to begin in this manner, but it makes sense in the bigger scheme of things. The ‘getting-to-know-you’ theme continues when John Sanders (Matilda) as Ned Ryerson, who initially is labeled as the ‘annoying salesman’, gets his own melancholy number, “Night Will Come” that lets us peek inside his strong sad soul and feel for him. It’s one of the most touching moments in this slightly shallow show. Andrew Call (American Idiot) as Gus, the camera man, has no number of his own, but he does get to shine a bit brighter than a typical second banana in Groundhog Day. This take on the film is about getting out of Connor’s narcissistic world and getting to know the people of the town a little bit better, and not tomorrow but in the ‘here and now’ of today. 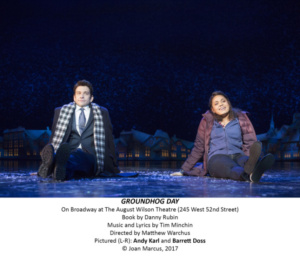 And then there is the romantic interest for Conner. Rita Hanson, the weatherman’s associate producer, played convincingly by Barrett Doss (You Can’t Take It With You). She does a great job reacting to all the different faces of Conner, while trying to maintain a real strong steady base. She mostly succeeds but the writers don’t do the character any favors either. Her gradual shift in what she thinks of Conner doesn’t necessarily feel authentic but at a certain point we just want to believe. We become like Conner, wanting the repeats to come to a stop and for the story to eventually wrap up. Hanson believes that all movies need to be ten minutes shorter, and the same could be said of this show (and maybe a few of the numbers). The storyline could be edited a bit and still resonate the repetitiveness of the repeating day. A tightening up would speed this show along. It’s a thoroughly entertaining show for sure, full of good humor, a great deal of talent, strong morals, and lessons learned, but I only wish there was more heart. But please, don’t cut the death number, which is the best tight bit of theatrical slight of hand you can imagine. It’s just too much fun. But be careful there Karl, don’t break a leg, literally speaking. This show needs you!
So for more, go to frontmezzjunkies.com
Related ItemsAndy KarlBroadwaydanny rubinGroundhog DayMatthew WarchusNewRosstim minchin
Broadway