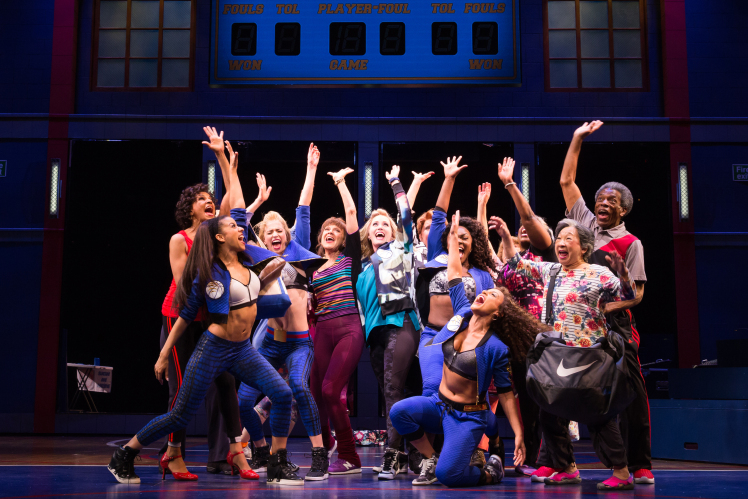 He Says: Half Time Is A Glass Half Full of A Chorus Line Charm and Half Empty of Emotional Depth

He Says: Half Time Is A Glass Half Full of A Chorus Line Charm and Half Empty of Emotional Depth

Back in 2008, a documentary was made by Dori Berinstein about a basketball halftime dance team that was made up of performers over the age of 60.  It was titled, “Gotta Dance“, and somewhere in that setup, an idea was born that this story could and would make a great feel-good musical.  The premise worked really well with the sweet and emotionally charming movie “Calendar Girls” and a similarly themed concept for the blue-collar workers in the musical Full Monty, so the wonderfully witty book writers, Bob Martin (The Drowsy Chaperone, “Slings and Arrows”) and Chad Beguelin (Disney’s Aladdin) with music composer, Matthew Sklar (Broadway’s Elf, The Wedding Singer) and lyric writer, Nell Benjamin (Broadway’s Legally Blonde) rightly must have thought that this idea might just have the right kind of legs to carry this new musical, Half Time. In some ways, it does just that, filling the stage with sweetness and charm, but unfortunately overall, it comes out of the gates feeling like a poorly constructed 2nd cousin to those better stories. You smile at the lovely kind stereotypes but also, you can’t help but cringe a bit when the stereotypes aren’t given much depth beyond the obvious.  It loudly asks us to pay attention to these people, in the same way, back in the 1970’s we were asked to pay attention to those hopeful souls in the groundbreaking A Chorus Line.  Half Time is the grandchild of that better musical, that somehow lost its way as it moved to the Paper Mill Playhouse. They did line up these seniors straight across the stage, taking us back to that iconic moment of that historic musical, and asking us to come to the same place of connection. The only things missing were the head shots held up in front of their faces, and the deep emotional engagement we felt with their struggle and need of approval.

The creators have assembled a pretty wonderful team of top acting professionals to bring this to the musical stage. They have filled out the chorus hip hop line of dance seniors with stellar older actors and dancers ready and willing to show us why they still rock. The younger cast members, to varies degrees of success, try to match their charismatic shoe filling, mostly doing a fine job playing their flat cameos, although Garrett Turner as the TV Host needs to dial his posing and over the top portrayal way down. Kay Walbye (Broadway’s Titanic) as Muriel, Lenora Nemetz (Mazeppa in Broadway’s Gypsy) as Fran, and Madeleine Doherty (Broadway’s The Producers) as Estelle bring their two dimensional characters to a more full life than the writing deserves as, one by one, they get their moment in the spotlight to tell their little slice of a life story. Tony nominee André De Shields (Broadway’s The Wiz) as Ron and Tony winner Lillias White (Broadway’s The Life) as Bea play older versions of similar characters they have played before, but with a whole lot of heart and style. They are all wonderful and work overtime selling us their emotional sincerity. De Shields’ song “The Prince of Swing” and White’s numerous reprises of “Princess 1, 2, and 3” exude skill and charm even though each aren’t given enough personal back story to elicit much depth of feeling.

Donna McKechnie does almost the same character that won her a Tony Award winner for her performance in A Chorus Line, playing an older dancer trying to remain relevant and regain some of her past glory by returning one more time to the stage.  This time though, she’d not older than all the rest, but just one of the crew.  She does get a number that almost seems like an aged carbon copy of the former seen through a different lens when she sings and dances her way through the less exhilarating “Too Good for This” in front of a wall of mirrors.  Yes, a dancer dances, but does it have to feel so specific to McKechnie and her past achievement for this character to be relevant? The audience chuckles to themselves at the equivalence, but for me, the number leaves a bitter aftertaste, as it seems that the creators desperately need some sort of connection to a better piece of musical theatre while installing a piece of internal conflict into act two. The stereotypical evil corporate lady, played with a slightly uncomfortable no-nonsense attitude by Tracy Jai Edwards (Broadway’s Hairspray), sporting a killer body in a pair of stilettos, wasn’t deemed sufficient enough, I guess. They needed McKechnie’s Joanne to turn around on her own character and demolish the always upbeat and smiling sweetheart Mae, played adoringly by Lori Tan Chinn (Broadway’s Lovely Ladies, Kind Gentlemen). She basically throws her under the bus because of a conversation she overheard between the evil corporate troll and the coach, Tara. As played with spunk by Haven Burton (Broadway’s Kinky Boots), coach Tara is the former young dancer who has been aged out of the dance troop and into a coaching job, and over the course of this musical, the engaging Coach slowly begins to shift her allegiance, starting to love the older dance team more and more as she whips them into shape. She basically has to, as this is a crowd-pleasing “Grease mixed with the movie Cocoon“, where all seniors are capable and crowned adorable, or so this and those stories tells us. It’s true in many ways, as these older actors are the glue that hold this piece together, with talent and energy to spare. Without them, Half Time would be more half empty than half full.

The surprising stand out charmer of this crew though is Georgia Engle (Broadway’s The Drowsy Chaperone) playing a version of the same character she seems to be always playing, the sweet and child-like role that brought her to fame in “The Mary Tyler Moore Show” so many years ago. And god help me, but it works spectacularly. This time there is a slight twist. Engle plays a somewhat bipolar character, Dottie and Dorothy, a split personality comic creation containing both a breathy voiced innocent kindergarten teacher who walks with a cane and is gentle and sweet, but who has inside her a hip-hop loving dancing grandma longing for the electronic beat of Biggie Smalls, Tupac, and Run-DMC. With a slightly generic looking arena-styled set by the usually much better David Rockwell (Broadway’s Lobby Hero), with obvious costumes by Gregg Barnes (Broadway’s Mean Girls), stadium style lighting by Kenneth Posner (Broadway’s War Paint) and sound design by Randy Hansen (Paper Mill’s The Sting), it’s ridiculous but fun, breathing some life into the straight forward structure and simplistic formula that runs rampant through the musical. I thought the genius writers of such magnificent pieces; The Drowsy Chaperone, “Slings and Arrows”, and Mean Girls, could have found some authentic heart in this rather tried and true formulaic structure, but alas, no. Sadly, this is not a wise senior version of A Chorus Line, as the heart is superficial, and the emotionality doesn’t dig deep enough.

As directed with an often too obvious attempt for almost cringeworthy humor by Jerry Mitchell, who created the far superior Broadway hit, Kinky Boots, the piece falls on to the charm of the talented senior dance crew to really pull us in and keep hold of us. Act 2 is surprisingly better at keeping to the beat, but the overall effect is not as good as the idea that brought this musical to the stage. Like all the seasoned pros lined up on stage, the wonderful Nancy Ticotin (Broadway’s Damn Yankees) as Latina fireball Camilla dancing with her young hot latin lover boy (Alexander Aguilar), has the last laugh, when she plays both sides of the coin with the funny line, “You’re stereotyping me. I’m always being stereotyped… Hand me my castanets!” You need a pro to pull off that line, and pros are what you have here in this band of energetic 60+ year-old dance squad trying hard to sell us on the tag line about not acting your age. They show us all how it’s done. Now I just wish the rest of the artistic writing team could have risen to their heights as well.

Inside the Off Broadway Alliance Awards
He Says: Lonesome Blues Begs for Your Heart