He Says: Harper Lee’s To Kill a Mockingbird Thrives and Flies on Broadway 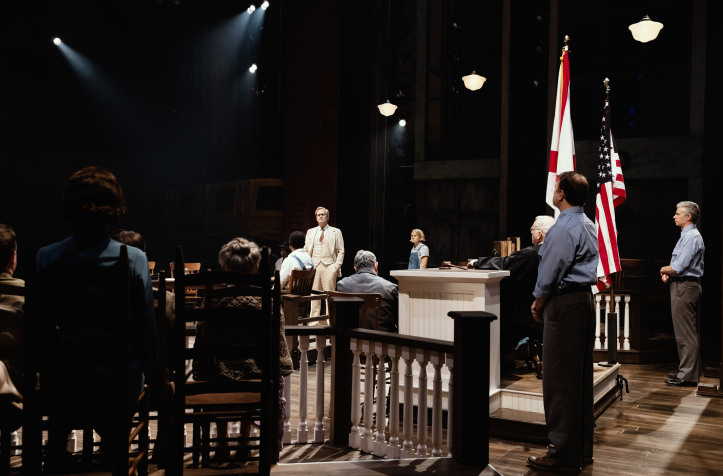 He Says: Harper Lee’s To Kill a Mockingbird Thrives and Flies on Broadway

Adding to the weight of an all ready legendary story, Aaron Sorkin (Broadway’s A Few Good Men, the film “The Social Network”, TV’s ‘West Wing’) delivers to Broadway a spectacle of such simplicity and straight forwardness that it would be impossible not to fall under its subtle charm and delicate intricacies.  This is clearly Harper Lee’s To Kill a Mockingbird, overflowing with Lee’s feel and feather of the time frame, painted with a dynamic and clear minded stroke by the particular Sorkin. None of her pointedness is lost in this strong telling, but enhanced theatrically by the smart and sly wit and structure of his pointed and precise writing. It’s good fortune fate is sealed in the wide eyed minds of its young guides, and cemented in its old wooden porch steps.

When I saw a production of the older play by Christopher Sergel at Stratford Shakespeare Festival this past summer – mainly so I could contrast and compare the two, I thought Segel’s version was very meaningful and tender in its linear and straightforward approach, although not clearly as good as its source material. It felt like it existed more because of the book and the movie, than as a piece of art on its own. Scout Finch was played by two actors, an adult grownup, functioning as the narrator guiding us through the classic tale that most of you all studied in school (I’m Canadian so I didn’t, but I did see the film years ago), and a child actor playing the young daughter Scout enmeshed in the intricacies of the narration. It was lovely and charming but old fashioned and somewhat lacking in creative juice.

Here on Broadway in the far more dynamic and wisely non-linear telling, Scout is played by the absolutely perfect Celia Keenan-Bolger (2ST’s The Parallelogram) as both the girl whose eyes are opened wide to racism and prejudice and is embodied in the same breathless energy of a youngster. She and the other two kid characters, Jem Finch, portrayed with beautiful depth by Will Pullen (Broadway’s Sweat) and his best buddy, Dill Harris, magnificently portrayed by the smart and talented Gideon Glick (LCT3’s The Harvest) find the duality of their narration with a strong sense of purpose, never losing the case and the point of Lee’s Mockingbird. It’s a wiser structural decision then it first registers. The beginning is connecting and sweetly engaging, loving the idea that we are going to be lead in hand by these three young ever so capable creations, but the emotional weight of this duality becomes more and more imperative and important as the play hopscotches back and forth between home life and the spectacular created courtroom, courtesy of scenic designer Miriam Buether (Broadway’s Three Tall Women), with warmly caressing lighting by Jennifer Tipton (Broadway’s A Doll’s House Part 2). To see the proceedings through these adult children’s eyes is to feel the dark weight of realization, and the uneasy disturbing truth of the world they and us are living in. This is not just a time period from back then that we are being connected to, but ours. And theirs. And everything in between.

And then there is Atticus Finch, walking casually to take center stage in the courtroom, bringing the familial and morality drama together with a simple stance, a performance that is delicately and dynamically given by the brilliant Jeff Daniels (Broadway’s Blackbird). He’s dashingly gracious and sincere playing the “kindest man” in town, but an imperfect one who doesn’t always get it right, just ask Calpurnia, deftly portrayed by LaTanya Richardson Jackson (Broadway’s A Raison in the Sun). All rise for Daniel’s take on the iconic man who will stand up to the racism that hangs in the air of that courtroom and in his beloved town. He floats magnificently into place defending the good Tom Robinson, portrayed delicately by Gbenga Arkinnagbe (The Flea’s Fulfillment, Lower Ninth) who has been accused of raping Mayella Ewell, a sad sack of a woman given nervous life by the dynamic Erin Wilhelmi (Broadway’s A Doll’s House Part 2) who is in need of more than just a helping left hand.

Robinson stands accused, mainly on the word of Mayella’s father, the rat-like Bob Ewell, given more than just a stereotypical life by the solid Frederick Weller (MTC’s The Fulfillment Center). We all know from the beginning what will happen in Finch’s chapel, watched over by the good Judge Taylor, excitingly well-played by Dakin Matthews (Broadway’s Waitress), and his Sheriff Heck Tate, exactingly portrayed by Danny McCarthy (Broadway’s The Iceman Cometh), but it’s all in the fine details where this revamping glides together with such homespun grace. As directed by the grand master of the Lincoln Center, Bartlett Sher (Broadway’s My Fair Lady, Oslo), the words spoken are delicately and meaningfully woven together like an expert quilt-maker, fleshing out the moments with a wise heart and a wickedly sharp wit. It never feels preachy, but solidly organic with the perfect stitch of seriousness twisted in with the delicateness of its humor.

Sher has a nack of pulling together a historical and possibly dusty foundation and breathing life into the scenario. Sorkin and Sher play with the linear, most adeptly, and add fine tuned nuance to the timely tale. The two musicians, seated on each side of the stage, music director Kimberly Grigsby on the Pump Organ and Allen Tedder on the Guitar, nimbly and graciously fill the air with an elegance of period flavor with original music by Adam Guettel and a solid sound design by Scott Lehrer (Broadway’s Carousel), in the same way that costume designer Ann Roth (Broadway’s Shuffle Along…) fills each bodily space right down to the bunched-up stockings of Mayella with a perfect seriousness of epic time and place. But it is in the recreation of Calpurnia that has, as I have been told, been fleshed out, given the balancing act of Lee’s scripture and Sorkin’s purpose, in order to get inside everyone’s skin. The interpersonal dynamic between her and Atticus is where the more modern thread has been sown. The intent is clear, and neatly done, adding a weight that we need, and a timelessness that is necessary.

The show has an “optimism” about it, and not one ounce of “stupid“. The monster that is living in that house over yonder, Boo Radley, nicely done by Danny Wolohan (off-Broadway’s The Low Road), is really not residing in that particular house, but living in the dark souls of many of the townsfolk who feel the racist strength of a hooded crowd, but are unmasked in the personal connection to their kid’s friends. The perfection at that is at the core of To Kill A Mockingbird slowly comes to order by Sorkin, like a classic hymn that we all know well, easily sung by anyone willing to raise their voices to heaven. Radley’s fantastical killer persona is spun forward by the excited adult children in swashbuckingly style, daring each other to jump across boundaries they are told not to step. It’s done in a manner that feels like some thrilling childish game that is larger than life, but still holds a kernel of truthful remorse and sadness; scary in the eyes of a child, but known and understood in the heart of a man who believes in the law like Atticus. The tender moments, especially the heartfelt talks between Atticus and perfectly crafted Dill, and the other with his daughter, Scout is as tender as you could hope for, yet powerfully tense with real world trouble. It all feels excitingly real while staying simple and clear. The “fell on his knife” creation hangs with full meaning in the eyes and voices of the three young narrators, who, wisely, are also residing as part of the narration. Sorkin has done Harper Lee an honor, rising her already perfect blend of storytelling and keen morality up to a higher, tighter, and stronger level, infusing it with humor and enmeshing it with strength of character. And I don’t know how we could “not agree on  this point“.