He Says: Hillary and Clinton: A Brilliant Alternate Middle on a Planet Far Far Away 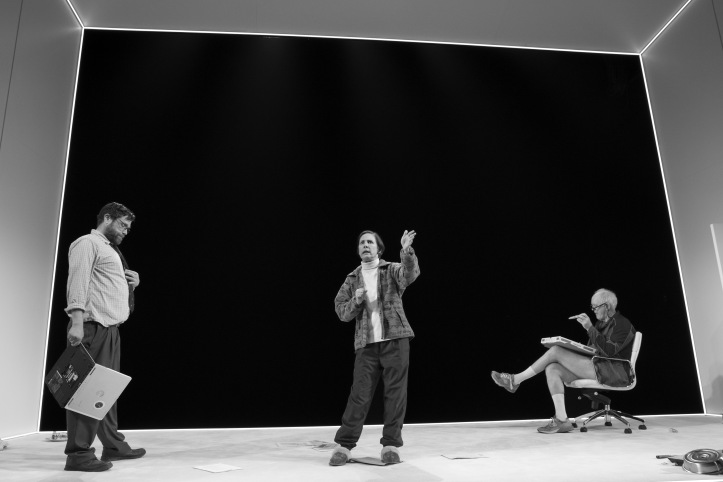 He Says: Hillary and Clinton: A Brilliant Alternate Middle on a Planet Far Far Away

This is a hard one to describe; Lucas Hnath‘s new dramatic dark comedy, Hillary and Clinton. It’s a complicated head game, beautifully set up by the captivating oration of its star, Laurie Metcalf (Broadway’s Three Tall Women) with mic in hand leading us effortlessly into one of the infinite alternate universes where two iconic players do their dance of complicated attachment. It’s a dynamic and hilarious journey to the dark side of a marriage made in political heaven and hell, slide into a parallel planet for our consumption. It’s not surprising that it leads our racing minds to Hnath‘s other wonderfully contemplative creation, A Doll’s House, Part 2, which also had the same charismatic actress as its leader. Both take on an inventive construct with Hnath (Red Speedo) running wild inside his imaginative playground hoping to find one of the many possibilities on this other January, 2008, and once you wrap your head around the abstractionism, the meta-political race to the end is on, full-force, fantastic and enlightening. Sort of. If you believe what you’re seeing is real. Or researched. Which it is not. At least I don’t think it was. Or is. Or will ever be proven. Or denied.

“Not calling Bill“, the woman who calls herself Hillary says, as the square that will enclose the action slides forward, beautifully and abstractly designed by Chloe Lamford (Young Vic’s Disco Pigs), with perfectly eclectic costuming by Rita Ryack (Broadway’s Casa Valentina), dynamic lighting by Hugh Vanstone (Broadway’s Groundhog Day), and stellar sound design by Leon Rothenberg (Broadway’s The New One). But we know she will, regardless what she tells her campaign manager Mark, frantically and manically played by the fabulous Zak Orth (LCT’s subUrbia). Because without the famously charismatic former president, Bill,  played with narcissistic delight by John Lithgow (RTC’s Stories by Heart), the time on this slightly different earth light years away, would be infinitely less dynamic.  These two, duking it out with a subtle needy love and abhorrence, are what keeps us tuned in.  And it is what drives the piece forward with energy and spite.  Their chemistry, both Hillary and Clinton, and their embodiments, Metcalf and Lithgow, spark the fire and flame that can make your eyes water (but I didn’t cry, I don’t think). It’s all power and personality, “pretty thin stuff to be remembered for“. Their engagement is what this play will be remembered for, playing with what we might think with what we know, and what we might imagine, if we were as whip smart as playwright Hnath.

It’s all a fantastic stress-filled buildup to when Clinton’s “new you” shows up, Barack, portrayed wisely and with wit to spare by Peter Francis James (Broadways’ Present Laughter). The power play is magnificently charged and a thrill to volley around with, imagining the impossible within that square space void of all human comforts. As directed with a sharp and piercing eye for conflict and clarity by Joe Mantello (Broadway’s The Boys in the Band, The Humans), the political chess game is a thrill and a hoot to witness.  It’s a memory of something that might never have happened except in Hnath’s mind; a place where all possibilities can exist lined up one by one, idea after idea.  It’s an attachment structure that many may walk out of the Golden Theatre believing. But don’t be fooled by the brilliance of his imagination.  But it’s pretty hard not to be, as Metcalf, Lithgow, Hillary and Clinton are all just too good to ignore or discard. So strap yourself in, and get ready for the journey of a political lifetime.