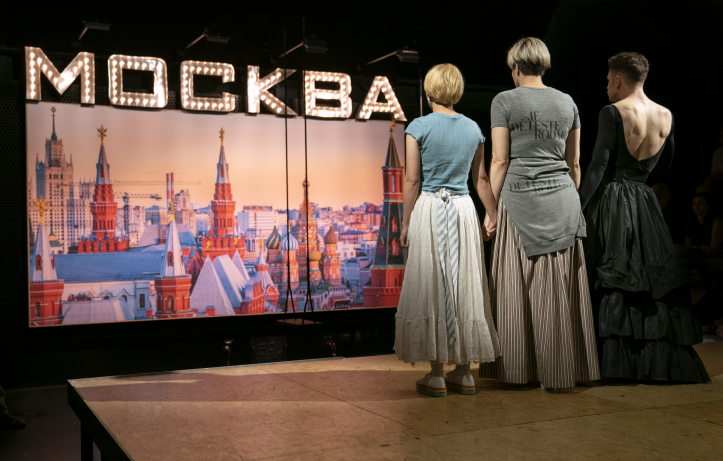 How many Moscow Moscow Moscow Moscow Moscow Moscow‘s does it take to get us fully going and engaged? I guess the answer is six. But you might want to ask the brilliantly twisted Halley Feiffer, the whip smart playwright that was also behind another long-winded-titled play,  MCC’s A Funny Thing Happened on the Way to the Gynecologic Oncology Unit at Memorial Sloan Kettering Cancer Center of New York City and the gorgeously funny The Pain of My Belligerence that played last season at Playwrights Horizons. While being somewhat ridiculous in her repetitiveness of the title, she also manages to shine a lightness and humor on the obstinate pathos of the Chekhovian structure and the sisters’ dream. “Obvi” I mean, this is a complete compliment, just to be clear, as the play frolics forward with speed and demented delightfulness and although the creationism involved starts to weigh a bit heavy on the ear, the preciseness and star casting lands so much brighter than the less successful Vanya update, Life Sucks, currently playing at Theatre Row.  Like that remodeling, MCC Theater has procured its own Chekhov to update, bringing forth a wild and wonderfully fun Moscow Moscow Moscow Moscow Moscow Moscow, a six-tiered modern retelling of his famous Three Sisters. All in a quick one act wonder that never fails to surprise or entertain.

Feiffer plays the sisters for laughs, most expertly in a rambunctious frenzy of fire-breed fury, while systematically placing it with precision inside a stylistic and solid construct. It’s done with a decisive directorial hand by Trip Cullman (Broadway’s Lobby Hero) letting the millennial shorthand take over and speed the languishing sisters to a surprisingly optimistic end without missing a beat.  Moscow Moscow Moscow Moscow Moscow… would make it all better, the thought is, but I’m not sure what Chekhov would have to say about this quick witted treatment, but Feiffer gets the gist of these privileged bores with ease, delivering  a snarky and smart 95 minute take on the long winded Chekhov ‘comedy’ with a baked in emotionality that zings in its inertia and brattiness.

The title is more a poke than a convoluted joke, making me feel as lazy a typist and/or writer as those Prozorova children moored without purpose in a Russian countryside farmhouse, designed with a wise wink by Mark Wendland (ATC’s The Mother), circa 1900 by way of 2019 emoji-speak. Dressed in modern tee shirts and colorful running shoes, courtesy of costume designer Paloma Young’s (MCC’s Alice by Heart) playful wit, the three sisters moan and complain about life and love as they are want to do, while they wait for something to stir them into action, and maybe even lead them back to their aristocratic upbringing in their hometown of Moscow Moscow Moscow Moscow… It is there, in that Russian city, the root of their maladaptive belief system, where they fully believe they just might find the happiness that truly must await them.

The oldest sister, the schoolteacher and spinster Olga, dynamically played to perfection by Rebecca Henderson (Signature’s The Wayside Motor Inn) leads the trio forward in delicious unified laughter and brittle bitter asides.  It’s Irina’s birthday, so they must celebrate, but it’s also the anniversary of their father’s death, so there’s that too, hanging over their heads. Tavi Gevinson (Broadway’s The Crucible) plays the young featherweight most beautifully, pulling and pushing aside advances with a bored gesture, particularly from the somewhat gay Baron Tzaenbach, deliciously played by Steven Boyer (Encores’ Assassins). Ramping up a deadly dark and twisted triangle of sorts, the efforts of Solyony, hilariously and complexly well played by Matthew Jeffers (NYTW’s Light Shining…) are also discarded with a petulant grimace of a millennial teenager who thinks she’s all that. Little does she know what will come of that.

Then there is Masha, the hot one, majestically played to the max by the wonderful Chris Perfetti (Public’s The Low Road). The drag-free performance by a actor in a long skirt excellently shoves aside her husband, Kulygin, the Latin teacher, hilariously portrayed by the Sondheim spewing Ryan Spahn (Primary Stage’s Daniel’s Husband) for the love and passion of the married Lieutenant-colonel Vershinin, handsomely played by the delightfully serious Alfredo Narciso (Public’s Tiny Beautiful Things).  “Careful the things you say…“, as he has a wife and two children – “We know!” – but that doesn’t stop this desperate sister of dreaming of the day she might just run off with her soldier to Moscow Moscow Moscow… Perfetti manages to be funny, natural, dismissing, and heart-breaking all within seconds of each other, making the character as real and solid as any other Masha around.

Flailing away but on a different realm is the worshiped intellectual brother, Andrey, dynamically portrayed by Greg Hildreth (Broadway’s Frozen) who is in love with the yoga pant wearing Natasha, played to the hilt by the impressive Sas Goldberg (Broadway/RTC’s Significant Other). Little do they know that as time flies by (quite quickly here on the Feiffer landscape) and that marriage is consummated more than just once, this little dynamo of a character (and actress) would blossom into quite the controlling magnificent monster, even threatening to get rid of the sweet old housekeeper, Anfisa, perfectly portrayed by Ako (Primary Stage’s God Said This) who has been with the family, like forever. Filling out the edges, Ferapont, delightfully played by Gene Jones (Signature’s The Trip to Bountiful) wanders in to get papers signed and show exasperation in their narcissism and privilege, while old Chebutykin, heart-breakingly portrayed by the detailed Ray Anthony Thomas (Broadway’s Jitney) slurs and swings up and down with a fevered dual love for a dead mother and surviving child drunk on perpetual remorse and “just one“.  It’s in these small moments of silly stumblings that the art of the actors really find their weight in gold, working together with such finesse and fun that it raises the piece from good to grand, even as the Russian countryside awkwardly “blows” them down.

“Is this too dark?“, “Nothing is too dark for us.” Perfectly presented and expertly timed, this Moscow Moscow… fires off with a hilarious deadly aim. With strong stark lighting by Ben Stanton (Broadway’s JUNK) and a concise sound design by Darron I. West (MCC’s Punk Rock), the dystopian landscape of this Chekhov standard flies by at a furious clip hitting ever quota and stance, “la la la“.  Feiffer balances the hopes, aspirations and dreams of her headstrong characters, while also finding in the heart of their harmonious pathos, the loneliness and desperation of the Three Sisters, where nothing will actually change. Even with their never ending hope that Moscow… will bring something better for them, for no real reason, if only they would do something about it. It’s surprising, after all the jokes and laughter brought forth most beautifully on the charms and backsides of the magnificent actors’ presentation, the piece finds its blood and heartbeat at the core, making their decision to go even more touching and heartfelt.  Who knew that was gonna happen?!?