He Says: Indecent This Is What Theatre Exists For

He Says: Indecent This Is What Theatre Exists For 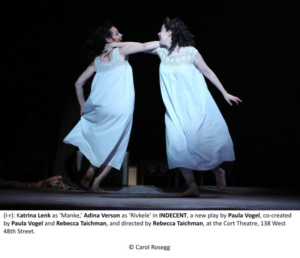 “This is what theatre exists for”.  A good friend of mine said that to me after seeing the Broadway musical, Once and also after the Roundabout Theatre production of Noel Coward’s Brief Encounter.  She’d say it again if and when she sees the intensely beautiful Indecent at the Cort Theatre on Broadway. It’s in the blending of theatrical forms and ideas, symbols and styles, all entwined with wonder and creativity, to tell a story, unlike any other seen before.  There are experiences that are only available and reserved for live theatre…no film can capture it; images, art, and expression that are the imagination coming to life in staggeringly beautiful moments, and this is what we experience here. From the creative minds of Paula Vogel (playwright co-creator) and Rebecca Taichman (director, co-creator), the visually powerful imagery and magic that happens within the first five minutes, as the ashes fall, is more than most shows could hope for in their entirety.  There is no other way to say this, but this production is a must-see, a definite Tony nomination recipient, and maybe the best play I’ve seen this year… so far (I’m seeing a few more before this theatrical season comes to a close on the 28th of April). 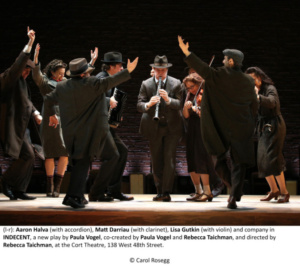 Indecent follows the real life creation and production of the infamous play, God of Vengeance.  This piece of playwriting changed the lives of all who were involved, from its first reading in 1906 Warsaw to its scandalous run on Broadway in 1923 and then beyond. This incendiary play by Sholem Asch is really the star of this magnificently powerful piece of theatre.  To call it a play within a play seems to belittle what transpires in this 90-minute creation. Thanks to the impeccable direction of Taichman (PH’s Familiar), it’s a much grander and yet, simple and meaningful engagement of all our senses. The design is magical, in its creation of this play within the play with the beautiful staging by Riccardo Hernandez (Parade), the subtle lighting from Christopher Akerlind (The Last Ship), the intense costumes created by Emily Rebholz (Dear Evan Hansen), the glorious sound design from Matt Hubbs (LCT’s How to Transcend a Happy Marriage), and powerful projections by Tal Yarden (The Crucible). With sensual and exciting live music (songs and music by Lisa Gutkin and Aaron Halva; music coordinator: John Miller) performed by an insanely talented eclectic group of musicians, Matt Darriau (clarinet, bass, clarinet, tin whistle), Gutkin (violin, mandolin), and Halva (accordion, baritone ukulele, percussion) and luminous choreography weaved in by David Dorfman, the journey we take is beyond description. 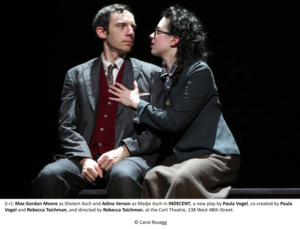 After the initial introduction of the gaggle of actors, in a manner that carries so much emotional punch, we begin this tale with Asch, played to perfection by Max Gordon Moore (2nd Stage’s Man from Nebraska) reading his newly finished first play to his wife, the enthusiastic Madje, wonderfully portrayed by Adina Verson (STC’s As You Like It).  From that point on, Madje is joined by others who see this play as a powerful piece of Yiddish theatre, breaking all stereotypes, and challenging morals and ideas.  Many at the roundtable’s first reading one night in Warsaw see this play as dangerous. The men in the literary circle privy to hearing it read out loud for the first time become enraged. They call it fuel for anti-Semitism, as the play contains a central character, a Jewish patriarch, Yekel, who runs a brothel from his basement.  This dramatic scenario, surprisingly, is not the straw that breaks the proverbial back of these men; it is the scene when Yekel’s virgin daughter falls madly and deeply in love with one of the prostitutes who work for him. In what many see later on (and one we will bare witness further on) as the most powerful scene in the whole play, the two women consummate their love for each other, kissing passionately during a rainstorm on the street outside the brothel. 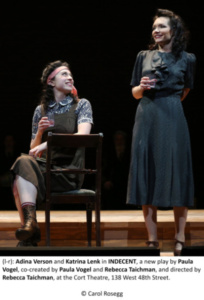 Enraptured by this emotionally charged scene, the two actresses (Verson, Katrina Lenk) who play these two lovers on tour with this play forge a deep beautiful connection paralleling the love and desire they represent nightly.  As the older actress, Lenk, who was just as magnificent in Atlantic Theatre’s The Band’s Visit as she is here, embodies the passion and deep sense of attachment to this play and all that it stands for.  Her performance is something beyond sensual. Her role as actress and as the part she is playing within Asch’s play is deeply moving and highly engaging, so much so that we can’t help but fall for them, and for this play. 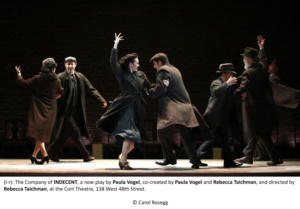 One man who also falls for this scene and this play is Lemml, played with a sweet wide-eyed innocence by the magnificent Richard Topol (Fish in the Dark), a simple tailor who by luck of the draw and a family favor, finds himself at the initial first reading. Deeply moved by the depth of emotion that exists in this play, he devotes himself to Asch and the God of Vengeance, becoming the stage manager when it is produced in Berlin and beyond until the end.  In Berlin, the play is met with wild applause, and with the famed actor Rudolph Schildkraut, played majestically by Tom Nelis (The Visit) starring, the play begins its successful tour throughout Europe, eventually landing on the shores of America. The rest of the cast, Mimi Lieber and Steven Rattzaai, along with Lenk, Verson, Moore, and Nelis, all play numerous parts, magnificently and smoothly.  It’s a seamless and spectacular wonder.

It is here in New York City, that this Yiddish play loses its Yiddish, and it’s emotional center. The love of the two women is lost in order to make its way onto the Broadway stage, and with that act, God of Vengeance looses it’s focus and power. But even with that sacrifice, it does not save itself from being shut down. The entire cast, along with producer, and one of the owners of the theater, were convicted on charges of obscenity.  But this is not the end of the play, nor is it the end of the play within the play, as one would think.  The ramifications continue. Asch falters in his faith in the world.  Not because of his play’s run in with the law, but from what he witnesses all across Europe. So disturbed by what he sees he can’t even speak about the horrors to his wife when he returns to her on Staten Island. The rise of anti-Semitism plays a substantial role in this impressive piece as we move forward towards the war.  The last third of the play is powerfully upsetting, as it always is when we begin to see the Star of David being attached to the actors’ jackets.  The writing of Indecent at this stage wobbles a bit on its strong legs. Vogel (How I Learned To Drive) making her Broadway debut, gets lost a bit in all that she is trying to say at the end, but that doesn’t take away the intensity of the imagery, the music, and the story. A woman one row ahead of me was crying in a way that seemed almost inconsolable. And I can completely understand how the piece can take us there. There is a note in the program that I am simple going to quote. “The song ‘Wiegala‘, heard near the conclusion of Indecent, was written by Ilse Klien, a nurse at the Children’s hospital at Theresienstadt. She sang this lullaby for the children in the wards. When it came time for the children to be transported to Auschwitz, Ilse Klein volunteered to go with them. It is said she sang this song in line to the chambers.” This is the kind of play this is, that utilizes a story and a song layered with such deep sadness as a thing of beauty.  It’s meaningful and poetic, while heart wrenchingly sad and disturbing, in a style and structure that can only be achieved live on a theatre stage.  Asch’s play, God of Vengeance, in a way, finally gets its deserved Broadway run, and what a glorious package it arrives in.