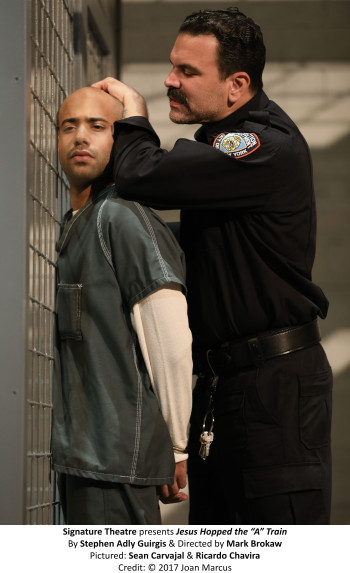 He Says: Jesus Hopped The ‘A’ Train: Wanting a More Erratic Commute

He Says: Jesus Hopped The ‘A’ Train: Wanting a More Erratic Commute 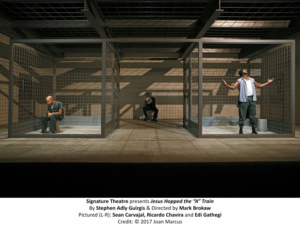 The staging is impressive. The set, designed by Riccardo Hernandez (Broadway’s phenomenally beautiful Indecent), gives off the sense immediately upon entering the Signature Theatre Diamond stage that everyone involved in Stephen Adly Guirgis’s Jesus Hopped the ‘A’ Train is a caged creature one way or another (perfect lighting design by Scott Zielinski and costumes by Dede M. Suite). Separate from the outside world, the two cells that sit like animal cages at a zoo are enclosed inside another solid rectangular box. The rest of world is exposed and raw on the other side of those walls, but not offering easy access. We see the back walls of the theatre as the world of the others that sits just out of reach. The sound design by M. L. Dog (Lortel Award for Here Lies Love) startles us from the first moment into full engagement. The combined force before the first word spoken is extremely effective and we prepare ourselves for this train to arrive in the station. 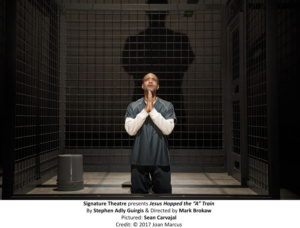 It’s obvious that no amount of praying by Angel Cruz, powerfully portrayed by Sean Carvajal (ATC’s Tell Hector I Miss Him), will ever release him from this or any kind of jail he finds himself trapped inside, even one of his own making. And it’s clear that God and salvation/forgiveness will play a strong, but supporting role in this detailed exploration. The same could be said for the second inmate Lucius Jenkins, played wildly by Edi Gathegi (Geffen Playhouse’s Superior Donuts). His offense is much grander in scale than Jesus’s, but he speaks of God and to God about salvation that teeters somewhere between profound and insane. His portrayal started to wear on me as the two-act play drives forward. He becomes something akin to that fellow passenger on the subway that rants and raves about our sins and our need for Jesus. My first impulse is to let the rant become something like a Charlie Brown adult voice, blurred and bent into something I can ignore. 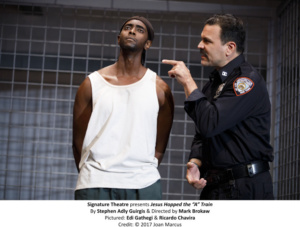 This express train ride of a play, directed by Mark Brokaw (The Lyons), is definitely not delayed at all, as it drives full speed to the end of its line. As a passenger of the much delayed MTA that is a dream ideal, but this ‘A’ Train needs to find some various speeds to keep us engaged or we might just zone out. The high-octane passion of the piece has taken over the ride, leaving us without a lot of variety of emotional energy. Some slower and quieter moments might make us lean in more, especially during many of Lucius’s rants. It’s in the erraticness of a journey that makes us aware of every curve and dip, not in its one note, even if that note is loud and angry. 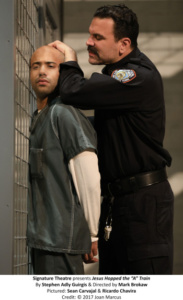 The first guard we see interacting with Lucius is the kindly Charlie, played by a centered and warm Erick Betancourt (Shakespeare in the Park’s Julius Caesar), who treats his prisoner with kindness and respect. Working up on the rooftop of a special 24- hour lockdown wing of protected custody on Rikers Island, his empathetic treatment of the prisoner ultimately in an odd but profound twist, grants the guard a release from being trapped inside those solid walls. 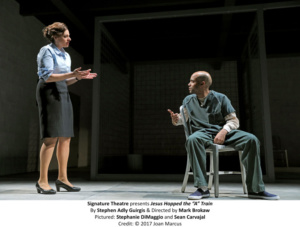 But his replacement, the brutal Valdez, played menacingly by the excellent Ricardo Chavira (Guthrie’s A Streetcar Named Desire), is now the one stuck inside a jail of his own making, one created by walls made up of anger, hatred, and bitter antagonism. His energy maybe makes him more suited to the position, but to the outside observer, he is frightening and scary. He echoes the universal reaction of how many view these inmates, as if they are wild beasts that need to be caged. It’s a headspace that rattles around the theatre, back and forth, accentuated by both Lucius’s mania and Valdez’s violence-laden aggressiveness. It’s hard to pin down how we feel about Lucius and the system in general. The sympathy we feel for his predicament is as erratic as his behavior. His violence that brought him behind bars is disturbing and very deadly, but what about redemption? Who are we to take his life for the crimes he did on to others? Is crime and punishment balanced with empathy and understanding of mental illness and traumatic abuse? Do we ignore the childhood abuse done unto Lucius or do we seek to give him care and treatment for his trauma? Do we turn a blind eye to the violent offender, especially if he or she is of color? And feel that we, as a community will be safer without him walking the streets. The answers are your own to make, but religion throws an additional layer on the social conundrum that makes it even more complicated for us to see clearly. And then there is Jesus, the inmate. How will he be able to see his way clear to the end if we can’t while we sit comfortably on the outside?

Jesus generally has our compassion from the very beginning, even as we hear more about his crime (or maybe because of it). We join forces with the attorney assigned to his case, Mary Jane Hanrahan, played strongly by Stephanie DiMaggio (Broadway’s A Free Man of Color) even as they rage against one another in their first meeting. DiMaggio’s engagement is solid and detailed, but I wish it had more shades of another color as it feels like she has jumped on the same train as the rest. She inhales the prison energy far too quickly, and joins them in their high decibel interactions when a transition to another train might have been more effective.

Regardless, Jesus Hopped the ‘A’ Train is a powerful piece of writing about punishment, redemption, forgiveness, and prejudice wrapped up in God’s judgment and also societies vantage point. It’s a shame that Brokaw, who did this so well with the incredible Heisenberg two-hander, fails to fluctuate the volume and speed of the train. Some variations of color and tone might have kept me leaning in more. When Valdez, in the final few moments, alters his position, just for a quick second, I perked up in a way that all the rantings of Lucius had me dropping back in my seat. It’s in the variations of theme, speed, and color that keep us on the edge. Not a good place to be on our daily subway commute, but great for a night at the theatre.