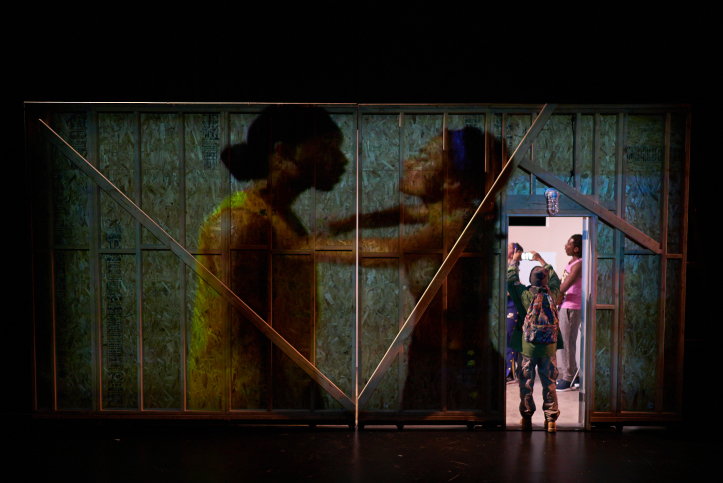 He Says: Jonathan Payne’s The Revolving Cycles Roll’d Through the Powerful and Dangerous Oblong

He Says: Jonathan Payne’s The Revolving Cycles Roll’d Through the Powerful and Dangerous Oblong

It’s quite the title. And a tale. To say the least, and it packs as much punch as anyone could ever imagine, driving us down a road towards disturbing violence and destruction that parallels quite effectively the #BlackLivesMatter movement and beyond. The Greek chorus toss us in to the matrix, making it clear that there is going to be no relaxing tonight. This cycle is going to require some heavy lifting for us concerned citizens in the audience world. This is a play about death, pain, and anger, and either you are with the playwright, Jonathan Payne, who also is a social worker working for the housing nonprofit Community Access, or you are not, as they say. The cast, made up of a stellar crew of talented professionals, brings authenticity to the maximum, pulling us heavily into Payne’s social experiences as he writes from his witty and distraught heart and mind, describing a troubled environment that he knows all too well. It’s a war zone out there, Madame Rose tells us, dressed in the tailored black of mourning for a 17-year-old tadpole; vilified and shot four times as he attempted to find help and survive the streets.

Payne submitted an early version of this new play, The Revolving Cycles – Truly and Steadily Roll’d to Playwrights Realm in 2015, which lead to him becoming a Writing Fellow for the 2015/2016 season. It’s no wonder, the play is heavy with emotional weight and experiential interactions testifying to the crowds an understanding that resonates and steals our sunny hearts. With a background in acting, Payne (Poor Edward) wanted passionately to create writing as a way to pull the sidelined characters that he was generally cast out and into the “front and center—the ones who otherwise would just come in and leave“. Within this solid piece of theatrical storytelling and epic commentary on life and death in the Oblong, Payne, with help from the clear-eyed and focused mind of director Awoye Timpo (ATC’s The Homecoming Queen), has succeeded, opening the doors into the lives of these desperate folk in a most unique and tremendously inventive way.

It’s show time folks, just so ya know, as we join Karma on the streets. She’s the difficult and engaging core of The Revolving Cycles played with raw nerve and desperate intent by the tremendously talented Kara Young (The Flea’s Syncing Ink), as a black teenager filled with love, anger, humor, and passionate frustration on an odyssey for attachment. She’s a lost and discarded product of the foster care system, searching for her foster-brother Terrell, the only family she believes she has.  Karma, most tellingly, wanders the streets hunting through the fictional inner city island of poverty known as the Oblong, seeking out clues from the strangers who might have played a part in Terrell’s complicated life. She holds tight to the hope that through her intuitive investigation she will discover Terrell’s existence as he has mysteriously gone missing months ago. She becomes aware of his vanishing only when she comes across a “Lost” and not found flyer posted on a loud and demanding Stop sign that made her do just that. She’s untrusting and pissed off, driving forward with her strong survivor skills solidly intact. Karma is “shouting in the streets and no one is listening” says Payne of his troubled lead character, holding a grudge against all who wrong her, with hopes that ‘her namesake’ is true and fully punishing. Her sense of humor and defiance stays strong as she hangs out restlessly on the corner alone and with no one to be curious or care about her in the slightest.

Maybe he’s run away or on drugs; or maybe he’s running away because of his involvement with drugs.  He might be dead, she is told, or maybe he’s just simply lost somewhere in the depths of the Oblong, a place so wild and dangerous that it should seem unreal, but it isn’t that far from the truth.  Karma is told all these sad and dispiriting scenarios, one after the other, and it’s shocking that her spirit stays in one piece, and her heart still beats with a ferocious strength.  A wide variety of complex souls cross her path in her search for Terrell’s discovery, as if summoned by the Greek Gods, and they all treat her in some manner of suspicion, disregard, or condescension. First, there is the well spoken and righteous undertaker and funeral home director, Madame Profit (naturally) played with upstanding Diva-like bravado by the glorious Lynda Gravátt (NYTW’s The House That Will Not Stand), who profits most spectacularly from the all-to-familiar scenes of ‘death by gunshot’ aimed at the black youth in her hood.  Her magnificence is outstanding and complex, rarefied from true pain and mourning. There is also an old-schooled teacher with poor recollection skills, portrayed with bumbling sincerity by Kenneth Tigar (Broadway’s Fish in the Dark). He’s drowning as much as his students, and in need of as much help as Karma is asking of him. There are several others on this epic Greek journey; a twisted foster-mother and a young ex-girlfriend both portrayed solidly by the strong mannered Deonna Bouye (ARS NOVA’s The Netflix Plays). All tend to be quick to disregard and attack Karma. Particularly relevant and well-crafted by Payne are the illusionary stereotypes that we, the jury, tend to jump to quick judgement of pointing the finger of guilt, just like Karma, but we all find the tables turn just as quickly, knocking Karma’s accusations and blame solidly to the floor, breaking them in pieces before our very wide-opened eyes.

The Revolving Cycles creates their own version of Homer’s Odyssey, pushing Karma through the trials of her dangerous road ahead, where some give her shelter and cold chicken (a beautifully scripted scene with Udom), and others show her the dangerous nature of the streets.  The young Dante, played with a quiet religious fire by the dynamic Donnell E Smith (NBT’s Kill Move Paradise) gives a descent worthy of his namesake with his own mythology of the Inferno.  His projected bloody Mary and the useless angels illustrate his vision most tellingly and brilliantly, clapping the story forward into the sad truth of Hell and the Oblong. It is within the strong creative vision that all becomes clear; gathering around the surreal and artificial magnificence of the stage within a box, designed by the mind blowing Kimie Nishikawa (Marvin Theatre’s Marjorie Prime), with precise and surprising lighting by Stacey Derosier (“Baggage” a short film), sharp clear gunshot sound by Luqman Brown (Cape Fear Regional’s Sense and Sensibility), authentic costumes by Andrea Hood (CSC’s Othello), and thrillingly strong projections by Lisa Renkel (Theatre Row’s Pedro Pan) that only enhance the artifice and the construct.

But in the end, it’s Karma’s story, regardless of what Profit has to say. The Lady eats the disappointment of her community, as we watch with sadness as the names get lost, changed, and forgotten, even by those who try to care. Tigar dons the actor’s skin who plays a Police Officer, finding that he has a lot to say about his character and his back story, breaking the fourth wall with tears and determination, saying more about the horrendous situation than a mere representation could every illustrate. Willy Fuckin’ Loman could never have said it better, but Gotto, the cold black rooster, played strongly by the deep voiced and soulful Keith Randolph Smith (Signature’s Paradise Blue) crows his love and affection draped in aggression and threats.  He seems to have tried, in his own selfish way, to create a version of help, but Death, played with strength and fortitude by James Udom (Public’s Macbeth) can’t help but jump at the loud explosions of fireworks and force an ending that is as powerful as it is abrupt. Turrell might be a missed opportunity as one character suggests, but this play is not, formulating an ending that is profound, timely, and emotionally smart while leaving you devastated by the quiet of the stillness. 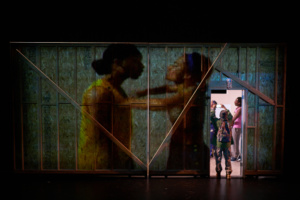