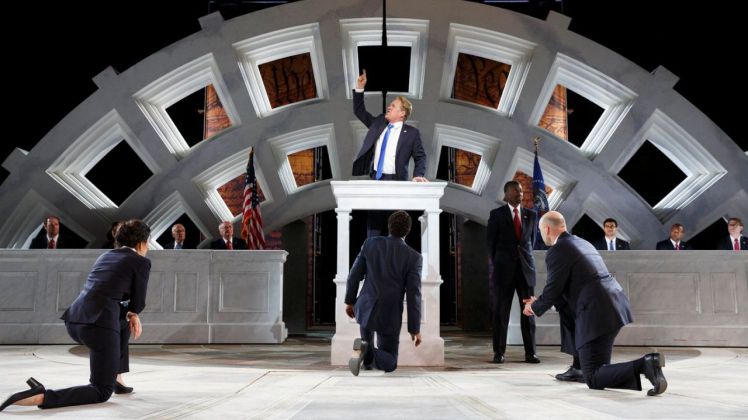 There has been a great deal of ranting and raving, screaming and shouting going on by the Right about the Public Theater’s Shakespeare in the Park production of Julius Caesar since opening night. They have started to gather outside during performances, chanting and yelling their complaints. A few days ago, the Public Theatre stated on Twitter: “a pair of paid protestors briefly disrupted our performance” rushing on stage and getting arrested. Julius Caesar, if you didn’t hear, as played by the fine actor, Gregg Henry, is fashioned after our current President, who will be referred to within the rest of this piece as #TheOrangeOne (my polite term for him). Tina Benko (Broadway’s The Crucible) is hilariously expert as the Melania-like wife of Caesar, Calpurnia. If you haven’t guessed it by now, I am not one of the offended nor am I one of his loyal fans. For many reasons. I don’t support the man, but I also know the value of theatre, especially theatre companies like the Public. Theatre should be provocative and challenging to our mind and our senses. This is what it is and should always be; questioning the status quo and the political and social world we live in. 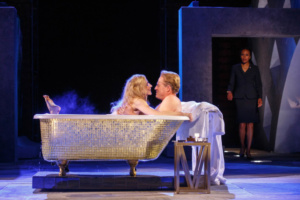 On that note, I’m not sure I find director Oskar Eustis’s stylistic choices all that provocative, just obvious. I guess it is shocking to some, but in many ways, if you really study the text of Shakespeare’s Julius Caesar two things are perfectly clear. The first is that Caesar as described by Shakespeare is pretty much #TheOrangeOne: cocky, arrogant, narcissistic, and paranoid. The situation in Rome, is also strikingly familiar to Washingon, D.C. today, with the often asked questions: should we embrace or be afraid of this new political era? Has the country gone off track and is this really the man to be trusted with its survival? Does the Senate have the ability to protect democracy if Caesar starts to act like a King rather than an elected leader? So it makes sense that in our political climate that Eustis would style the production around such a large and current public figure. These questions of danger are the same. These personal characteristics are similar, although, to be clear, our current President would never refuse any crown being offered like the one thrice offered to Caesar by Mark Antony, gloriously played by Elizabeth Marvel (Public’s The Book of Grace). Caesar is said to not be ambitious.  That is definitely not how one would describe our current leader. Marvel, reminding me of the loyal Ivanka, is exactly that, a marvel with a southern senator’s drawl with an astounding ability to whip a crowd into a frenzy using every tactic available in her magnificent funeral oration, including alternate facts. 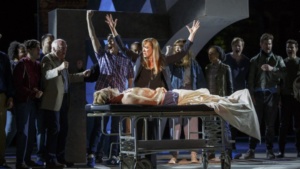 Because of this obvious pairing of celebrity and character, companies such as Delta Airlines and Bank of America have pulled their funding from the Public Theater. But truth be told, this outcry speaks volumes and none of it good.  In 2012, there was a different production of Julius Caesar in Minneapolis (partially funded from Delta Airlines) at the Guthrie Theater in which the title character references President Barack Obama. This production did not provoke a similar backlash like the Public is currently dealing with. The response was basically positive. I guess it’s ok if the character looks like Obama (yes, I’m talking to you Delta Airlines).
The other ingredient to this discourse is what Julius Caesar is truly about. Shakespeare, when he wrote this play in 1599, begs us to consider two ideas: How far should concerned citizens go in removing a dangerous man from becoming their leader? And what are the consequences that result from this action, even with the purest intentions? The debate is complicated but it is also very clear in the writings of this 400+ year old play that the results of taking action is always disastrous, for the country, for democracy, and equally deadly for the rebels. 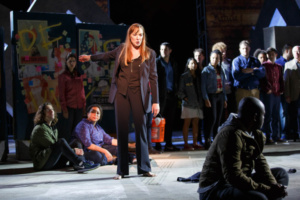 This play should really be titled, Brutus, for the same reason Hamlet is called Hamlet. Caesar is just the symbolic ignitor, the catalyst of the fall, but he is not the character that who has the internal conflict that must be grappled with. Majestically played by Corey Stoll (Public’s Plenty), Brutus is really at the center of this psychological struggle between patriotism, honor, and friendship. He seems to have the purest and most noble intentions when considering defending democracy using violent undemocratic means. When he discusses the idea of assassinating Caesar with Cassius, a well played John Douglas Thompson (Broadway’s Tony winning Jitney), he is clearly thinking of his country first. It is thought that Cassius and the other conspirators are motivated for not as pure of reason, but motivated by envy and ambition, but nothing is so simple in Julius Caesar. There are no obvious villains or heroes, just view points and constructs. Brutus does eventually decides to join with the conspiracy but only after a great deal of debate and moral hand-wringing. He ultimately believes that Caesar, although a friend, would be a dangerous man if he became the leader of his beloved country: “A serpents egg/which hatch’d, would, as his kind, grow mischievous,/ and kill him in the shell.” 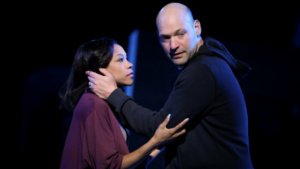 With a grandness of the Senate power, coupled with a deconstructed chaos, the set design by David Rockwell (Roundabout’s She Loves Me), a modern dress costume design by Paul Tazewell (Public’s Privacy), concise lighting design by Kenneth Posner (War Paint), and intense sound design, drowning out the protesters outside, by Jessica Paz (Dear Evan Hansen), the look fits the equating of ancient Rome and modern day Washington, D.C.  The look and feel create a sense of dread especially with the parallels being so closely aligned. The only set piece that I found odd and out of place, was the inclusion of the realistic studio of Brutus, with walls, door, furniture, and a bed.  Everything else is created, as with most Shakespeare, with slight adjustments of the impressive background pieces and our imagination, even an early scene with Brutus at home with his wife, Portia, beautifully played by Nikki M. James (The Book of Mormon). So the realistic apartment setting looked strange on the mostly abstract set.
The consequences for the act that is bringing together all the protesters both on stage and off, is obvious.  Even with the most noble stance possible, those who attempt this type of brutal action, will pay a terrible price and destroy the very thing, democracy, that they are trying to save. Violence, no matter how you debate it, will only beget more violence. Revenge will reek havoc, even on the heroic. The act will bring turmoil to the one thing these people believe is worth fighting for.  Julius Caesar, as written, in no way advocates any violence towards anyone, no matter how dangerous the situation or the man appears to be.  This is something those protesters don’t seem to understand, and quite possibly, don’t want to understand or know.  If Julius Caesar is about any one thing, it is an anti-violent plea against those who are frightened by the current political situation, desperate for change, and thinking of taking action above and beyond the law of the land. That does feel like a very present day emotional state, but Shakespeare is basically saying, ‘don’t do it’.
So for more, go to frontmezzjunkies.com
Related ItemsCorey StollJulius CaesarNewOskar EustisRossShakespearethe Public Theaterweareonepublic
Off Broadway