He Says: King Jackson in Lear 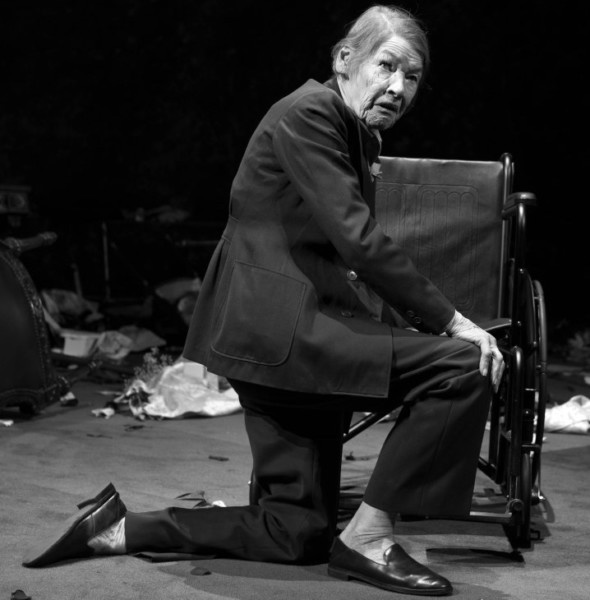 He Says: King Jackson in Lear

I’ve seen so many King Lears that I’m starting to feel exhausted by William Shakespeare’s devastatingly wise dissection of aging narcissism and human nature. I mean, how many times can I witness madness on the heath (I guess quite often), even as I worship its biting expansion and erratic contemplation on those very themes. With Lear, I always urge one to watch the Canadian series ‘Slings and Arrows‘ if you want to expand your understanding. Over three seasons, it relishes and explores the idea of the three stages of man, one age per season, as portrayed through Shakespeare’s finest, with Lear being the final season, quite naturally (Hamlet is Season one and Macbeth Season two). But one of my earliest memories of Shakespeare and theatre in general, was when on a school trip, I saw Peter Ustinov play King Lear at the Stratford Shakespeare Festival in Canada, the company ‘Slings and Arrows‘ tips its naughty hat to.  I can still picture the image of him barely standing half-naked on that thrust stage with the wind and the rain pounding him almost to the ground, and crouching at his feet, a scared but loyal Fool. It was riveting and one of those moments of theatre that solidified my fascination with its power and persuasiveness.

Last year, the Royal Shakespeare Company brought their revered production to the Brooklyn Academy of Music’s Harvey Theater.  Directed by the RSC’s artistic director, Gregory Doran (BAM’s King and Country), that production, first presented in 2016, starred the incomparable Sir Antony Sher, one of Britain’s most esteemed classical actors, tackling one of the last major male roles from Shakespeare’s catalogue that he had yet to play. Sher states that once you play Lear, there’s really “nowhere else to go, Shakespeare-wise“. The part is a solitary climb; a battle against time and importance; a ‘shouting at, arguing with, a storm”; the ultimate duel with a force of nature and existence.  It’s a part that requires no fear and a lot of humility.  It is, as Sher rightfully states, “the Everest of acting“. And even with all that, I found that production stiff and unrelenting even if Sher understood its majesty. He crowned the role with importance, a fitting idea for a man who is almost ready for his final bow but not quite ready to fade away.

Sher basically got that part right, but I will add that he used the wrong gender, or should I say, he was being gender conformist at the time. Little did he know (or maybe he did, I’m not sure of the timing) that the real and true King of all Lears would be in the female form of the legendary actress, Glenda Jackson (Broadway’s Three Tall Women). And it would be this fearless and danger-seeking woman who would redefine what this role means, at least for me, giving it a life and an understanding that had evaded me up until now.

As directed by Sam Gold (Broadway’s A Doll’s House, Part 2, The Glass Menagerie, Fun Home), Jackson, alongside two other formidable women, Ruth Wilson (Broadway’s Constellations) and Jayne Houdyshell (Broadway’s The Humans) charges forth, playing their masculine parts with a force of nature that is truly outstanding and not to be missed. Jackson makes Lear more clear and comprehensible, even in those moments when you want to plead with the wind to make the elderly King see the mistake in his narrow-minded thinking, especially in what love and devotion of a daughter should look like.

Wilson takes Cordelia and sets the tone of devotion beautifully and simplistically, but it is when she dons a smartly defined accent and hat as the King’s Fool, that this actress truly finds the light and dark within. There are a surprising number of lines, both by the Fool and the King, that make this partnership of two roles an obvious choice, and a wise one. Wilson, who was so darn good opposite Jake Gyllenhaal in Constellations on Broadway a few years ago, makes the Fool a wise and spirited one. Houdyshell also shines in her blindingly good portrayal of the Earl of Gloucester whose foolishness is seen more clearly without the functionality of her own sight. And within the portrayal of the bastard Edmund, Pedro Pascal (PH’s Maple and Vine) filled with devilish charm, another slice of brilliance glowers with glee enticing us all within his grin. He’s far more engaging than his good and legitimate brother, Edgar, played with a bit too much earnestness by Sean Carvajal (Signature’s Jesus Hopped…) in the somewhat thankless part.

The other sisters; Goneril, played forcibly by Elizabeth Marvel (Broadway’s Picnic) and Regan, oddly portrayed with extremes by Aisling O’Sullivan (BAM’s The Beauty Queen of Leenane) is where the classic tragedy starts to falter on that stark set by Miriam Buether (Broadway’s The Children). Dressed in oddly sparkly costumes by Ann Roth (Broadway’s To Kill a Mockingbird) the two are pushed to be seen as daring and aggressive but it feels flails in inauthentic posturing rather than the real ness coming from the other women as men. The blankness of the golden room is typical of Sam Gold’s productions, and it works, for the first Act, giving regale display to the proceedings, but out within the storm, the flat wall claustrophobically ensnares the lost wanderers. Corralled and trapped on a sliver of the stage front, the actors fight to find the truth, even as the structure minimizes the precarious place they find themselves. The lighting design by Jane Cox (Broadway’s Jitney) and the sound design by Scott Lehrer (Broadway’s Hello, Dolly!) Do their damnedest to save the scene, but I couldn’t clear my mind of that image of Ustinov being thrashed by the full force of nature’s demonic strength. I wanted the feeling of unprotected expanse and danger, and even with Jackson’s majestic rendering of that railing against the world, the bareness and vulnerability was lessened by the tight design.

John Douglas Thompson (Broadway’s Carousel) as the Earl of Kent, along with Dion Johnstone (Red Bull’s Coriolanus) as the Duke of Albany, Justin Cunningham (Sheen Center’s Little Rock) as the Duke of Burgundy and Ian Lassiter (Broadway’s JUNK) as the endearing King of France all deliver fine and convincing portraits. Matthew Maher (NYTW’s Othello) as Oswald, Goneril’s trusted servant is funny but distracting in his affect, almost as much as the musical string quartet wandering on and off stage in formal evening wear. Philip Glass’s (Einstein on the Beach) music is stunningly beautiful, but at so many moments the four were as distracting as the unsteady and formulaic destruction that litters the landscape.  Russell Harvard (PH’s I Was Most Alive With You) as Regan’s deaf husband, Duke of Cornwall, with American Signing done by his ‘Aide’, played by Michael Arden (director of Deaf west Theatre’s Spring Awakening) is a compelling idea that somehow feels more clumsy in its execution than wisely integrated.  Regan and her husband are both big and loud, lacking any subtlety in their characterizations, seemingly cruel and intense out of nowhere and for no real authentic reasons other than they are being directed to be thus.  The two have always been the worst house guests of all times, but here in Gold country, you wonder why the good Gloucester would ever let them through his door.

But these are minor qualms, as the show really belongs to the three woman who have taken on these male roles elevating them to godliness. Jackson is as daring an actor as any who have taken on this lion of a part. She rips it apart with clarity and passion, giving meaning and distinction at every turn.  She’s a force of nature, and a King among Kings in the history of this iconic play.