He Says: Little Shop of Horrors Opens Its Camp Classic Doors Once Again 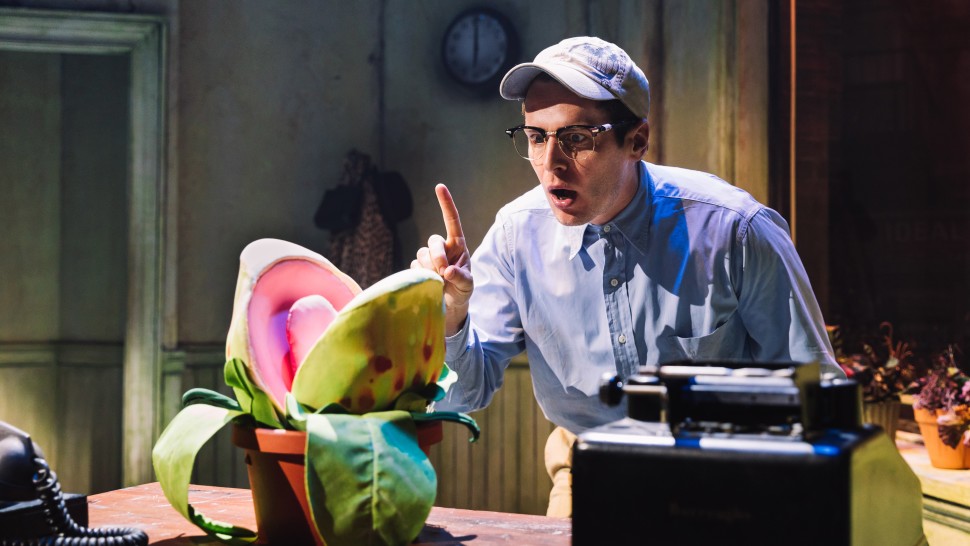 He Says: Little Shop of Horrors Opens Its Camp Classic Doors Once Again

“Feed me, Seymour!” is basically what the enthusiastic crowd is screaming with delight as the camp classic Little Shop of Horrors revs up its motorcycle engines at the Westside Theatre/Upstairs. They are on fire, the crowd of Green enthusiasts, waiting for the stupendous Jonathan Groff (Broadway’s Hamilton, Encores’ A New Brain) to stumble and trip his way, most perfectly onto the Mushnik Flower Shop floor. It’s pretty much one of the most delicious casting choices of the season, placing Seymour on to the tensed up shoulders of Groff. Even with his handsome-ness almost too hard to cover up behind those glasses and bandages, he soars as the uncomfortable nerd who most certainly has to grow up as “big and strong” as the creature that overtakes center stage, Audrey II. It’s as delicious as one can hope for in the hands of Groff, giving us a Little Shop that will keep its flower shop doors open for business long into the years ahead, just like the original.

Years ago, when I was a young impressionable college student studying theatre at York University (set design/arts admin), the same feisty little musical arrived overtaking a small theatre downtown Toronto with its green growth. I can’t remember the name of the theatre nor who played the roles, but I did know, at the time, that it was already a camp classic when it set up shop on Yonge Street, sprouting up from New York City with skid row buzz of the highest order. The leaf-cutting sprout grew big, digging its roots into the Toronto theatre scene becoming a sought after and exciting spectacle, and I couldn’t wait to see this strange and unusual, critically-acclaimed musical, that had won several awards including the 1982–1983 New York Drama Critics Circle Award for Best Musical, the Drama Desk Award for Outstanding Musical, and the Outer Critics Circle Award. It must have sprouted up just after it opened at the Off-Off-Broadway’s Workshop of the Players Art Foundation (WPA Theatre) in May, 1982, as it was sometime within the year that I saw it in Canada. In NYC, after it premiered to acclaim and sold out houses, Little Shop relocated to the Orpheum Theatre Off-Broadway in July, 1982, where it had a five-year glorious run starring the ever magnificent Ellen Greene and Lee Wilkof. Many were, at the time, pushing it to move to Broadway, but book and lyrics writer Howard Ashman (Smile, Beauty and the Beast) felt the show belonged just where it was, downtown, run down, and appropriately intimate. Wise man, as a small off-Broadway house feels like just the right fit. It thrived in NYC back then, and even though I’m not sure how it was received in those days when Toronto was just starting to import NYC hits like Cats and Little Shop, I remember it felt pretty much perfect in that shabby downtown Toronto space, growing forever roots in my memory in a way few shows ever did.

Thankfully, Little Shop of Horrors, based on Roger Corman’s campy, low-budget 1950 horror film about a man-eating hungry plant trying to take over the world, has found its delicious way back onto the stage once again. Thanks to the solid work of scenic designer Julian Crouch (Broadway’s Hedwig…), with pitch perfect costuming by Tom Broecker (MTC’s Our Mother’s Brief Affair), horrifically wonderful lighting by Bradley King (Broadway’s Hadestown), and scary delightful sound design by Jessica Paz (Public’s Miss You Like Hell), it lands magnificently in the Westside, without the help of a total eclipse of the Sun. As directed with spark and sass by Michael Mayer (RTC’s Love, Love, Love, 2ST’s Whorl Inside a Loop) and delightfully in tune choreography by Ellenore Scott (Broadway’s Head Over Heels, King Kong), Little Shop finds the perfect balance in it’s nutritional misting, in a way that will certainly make that leafy vegetable grow big and hilariously ridiculous.

With the guiding hand help of the glorious do-wop Greek chorus ushering us past trash and a few perfectly placed singing drunks, the show sings strong. That glorious Motownish music by Alan Menken (A Bronx Tale, Newsies), with music supervision, arrangement, and orchestration by Will van Dyke (Broadway’s Pretty Woman, Kinky Boots) rings true and hilariously pure, wrapping the audience up like fresh cut flowers bought at our neighborhood floral shop. Hanging on the corner steps, the Urchins, comprised of Ronnette, played by the wonderful Ari Groover (Broadway’s Head Over Heels), Crystal, portrayed by the talented Salome Smith (TUTS’ The Wiz), and Chiffon, played by the joyous Joy Woods, sashay the show forward, making us secretly wish for a few more moments of girl-group glittery glamour (like they did in that most delicious film version). They shine just as brightly though, and sound delightfully glorious.

They draw us in from that glorious opening number, “Skid Row (Downtown)” even if it never truly lives up to the 1986 movie soundtrack memorized in my head. They all grow on you with ease, even the woman who has been given the night’s greatest challenge, Tammy Blanchard (Broadway’s Gypsy, The Iceman Cometh), who is stiletto-heel stepping into a role that is owned most vigorously by the magnificent Ellen Greene, the star of the original Off-Broadway, feature film, and the 2015 Encores! production. All one has to do is watch the YouTube video of her unforgettable Audrey singing the iconic “Suddenly, Seymour” to know that anyone who takes on the role is singing in a high camp memory contest with the unbeatable Greene. She personified the needy and vulnerable gal, so fragile but with that big undeniable voice. She balanced, as effortlessly as she did on those heels, the powerhouse vocals with the desperate squeak of the discarded and the hopeless dreaming of “Somewhere That’s Green”. Blanchard’s Audrey doesn’t disappoint, but I must admit, she doesn’t send me through the roof like Greene continues to do when I re-watch her in the Frank Oz film. Sometimes Blanchard seems almost drunk in her sad wistfulness, swaying and stumbling with just a wee too much something or another.  She does entice, making us lean in with care when she shares us her desire for just a little slice of the American Dream; not too much, but just enough to make her feel safe and secure. Blanchard finds her own type of Audrey, purposefully forcing us to set aside Greene, never really bringing down the house, but certainly pulling us into her pain and hopelessness with original finesse.

I ache for her in a way, especially when pushed around by the hilariously constructed Orin, the sadistic dentist, played to full-on delightfulness by the elastically funny and brilliant Christian Borle (Broadway’s Something Rotten!, Falsettos) who scores one point after the other with each assorted character he dons a wig or hat for. He’s ridiculous, in a very good way, bringing down the bloody curtain with every entrance and side wink to the cheering crowd. Tom Alan Robbins (Off-Broadway’s The Government Inspector) as florist Mushnik also delivers the goods with a perfectly balanced floral arrangement of unkind prickliness and fake rosy delightfulness, especially with his entangled loving manipulation song, “Mushnik and Son“. But it is in the outstretched bite and green grasp of Audrey II, dynamically voiced by Kingsley Leggs (Broadway’s Pretty Woman) [courtesy of the wonderfully constructed puppet by designer Nicholas Mahon (MOMIX’s Alice) and puppets/puppetry training by Monkey Boys Productions, with the dangerously dynamic puppet manipulation by Eric Wright, Teddy Udain, Kris Roberts, and Chelsea Turbin], where the “Suppertime” dilemma delightfully flourishes, taking over the downtown space with his big voiced greed. The meek may indeed inherit the earth, but it is in the star powered wonder of Groff, Borle and Blanchard that this Little Shop of Horrors finds its camp-tastic glory. It’s perfectly formatted for success and full house growth. No need to close for renovations between leads (as I am curious about who will keep this plant alive after these leads depart for greener pastures), this floral shop will hopefully and rightly remain open for business for some time. So all I have to say to all those tickets buyers out there wondering what to do. My words of wisdom: just go “Git it“.