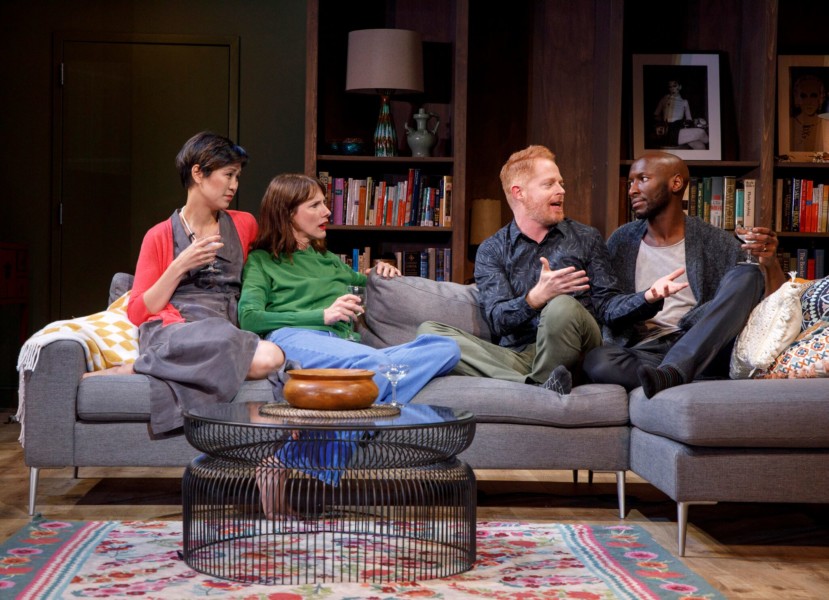 He Says: Log Cabin is Solidly Built with Progressive Wooden Beams of Words

He Says: Log Cabin is Solidly Built with Progressive Wooden Beams of Words

On a glorious Sunday evening in New York City, the streets are filled with Gay Pride celebrations but I, rather than join in with the parade and the party, enter Playwrights Horizons to see Jordan Harrison’s exciting new play, Log Cabin.  It’s probably the gayest thing I did all day, and it’s about the most perfect way in my world to spend #GayPride2018, seeing a play filled to the brim with diverse depictions of sexuality and gender identity standing center stage side by side in a celebrated Off Broadway theater production. It is truly mind-blowing, if you think about it. The leads all don’t fit into any hetero-normative box, but jump racial, sexual, and gender identity boundaries casual and solidly, but it’s also so much more than a play with a gay couple, a lesbian couple having a baby, a trans man, and a straight young woman who generally gravitates towards handsome trans men. There are details and dynamics that sputter out about a whole manner of topics, including conceptions of what it means to be labeled “cis”, as these six characters come together in a beautiful decorated revolving apartment (kudos to scenic designer: Allen Moyer; costume designer: Jessica Pabst; lighting designer: Russell H. Champa; sound designer: Leah Gelpe) to discuss, banter, and fight, while also showing love for one another in their own personal manner. While not always so obvious, love is there, along with attachment and care, even when hidden within monosyllabic responses and under detached interruptions, it is somehow purely stated and felt.

As directed with crisp and effective pacing and style by Pam MacKinnon (Broadway’s The Parisian Woman), the metaphoric dilemma lies squarely within the baby’s refusal to start talking. It’s a subtle but powerfully created dynamic, and as the years past, the formulation, made most effectively by utilizing Ian Harvie (Amazon Prime’s “Transparent“) as the non-verbal infant and child of the lesbian couple, becomes increasingly deliberate and in response to the conflict that is being played out before his infantilized eyes.  Words don’t seem to solve the problems before him. They just heighten and create impasses in connection and understanding, complicating scenarios through definitions and layers of implied meaning.

Jesse Tyler Ferguson (Broadway’s Fully Committed, “Modern Family“) and Phillip James Brannon (Broadway’s Junk) are fascinating as the sweetly cuddly and most recently married gay couple, Ezra and Chris, that step over one another with words and storytelling boundaries, listening but ignoring signals and statements when deemed necessary.  Pam and Jules, played most effectively by the marvelous Cindy Cheung (Vineyard’s Middletown) and Dolly Wells (New Group’s The Whirligig), seem to understand and compliment each other in distant deference and detached connection.  Their pregnancy timeline that goes from zero to four quick years is the framework that brings the pack of old friends together, balloons and all, with another couple joining in midway through.  It feels a bit too formulaic and artificial like something out of a formula especially with the arrival of Harvie who, besides playing the infant that doesn’t want to speak, also portrays Henry, Ezra’s high school bestie, who has transitioned from favorite gal pal to best male buddy and rampant womanizer. He’s brought along his latest young girlfriend to the birthday party, a straight hippy girl who just happens to like being with trans men because, she believes, they treat her more empathetically.  So sweet and naive, Talene Monahon (Atlantic’s Tell Hector I Miss Him) is the adoring girl who gets pushed and pulled into oblivion by the carelessness of words that are tossed around by the other five with abandonment and one poorly remembered baby monitor. Thank goodness she has the strength to see the scenario for what it is, as it is troubling enough seeing how she is treated so casually by Henry and the others.

The topics that are flung around and against one another over beers and mojitos are broad and complicated. Most revolve around word choices and underlying meanings, while some are tossed in and out so easily they hardly make a dent. In the politically correct world, the slippery slopes surround us all, with each of us unknowingly shoving stereotypes and categorical assumptions on one another, even when the fit seems awkward. Alliances shift and stereotypes collide with reality in Log Cabin, with some feeling realistically uncomfortable and other decisions and scenarios seemingly harder to understand or digest. Some fare better than others, but when Cheung’s Pam gives a lesson in forgiveness and acceptance, the therapist inside me applauded her honest depiction of relationships and emotional contracts. It’s a powerful moment, one of the best, that rings hard and clear across all of the complications presented. Regardless which side of the arguments you sit on, and you might be surprised where others do find themselves, there they are, asking us to lean in and listen. Maybe take a side, or sit somewhere uncomfortably on the fence, as there are no rules of right or wrong in this Log Cabin.

To say something, especially for a critic, can be challenging at times, especially in regards to those plays that challenge ideas of racism, prejudice, and societal norms. A negative review can be seen as politically incorrect if not worded carefully.  I have seen it happen, and always tried my best to be aware. That being said, I have said and written a few haphazard and unintentional inappropriate remarks, even in positive reviews that have been pointed out to me by readers (happily received, see notes at the bottom of this link). Knowing how to say what you are trying to say without shoving more than just your foot in your mouth is an art, and one I strive to succeed in as much as I can. With the number of solidly and aggressively confronting plays that have been making their way to the New York stages (which I am completely thrilled by), the task gets harder and harder, but the challenge is worth it on every level. So even when we are tempted to not speak and stay quiet, or ask the difficult question that is hanging around in our mind, in order to live fully and robustly, we need to be brave and speak up. The task is daunting, and we might be called out for making a mistake here and there, but that is what living is all about, isn’t it? Risking it all for the sake of understanding others and ourselves. Jordan Harrison, I believe, understands that, and so does that new baby on board. We should all listen up.