He Says: Manhattan Theatre Club’s INK is All Cap Kinda Wonderful and Powerful 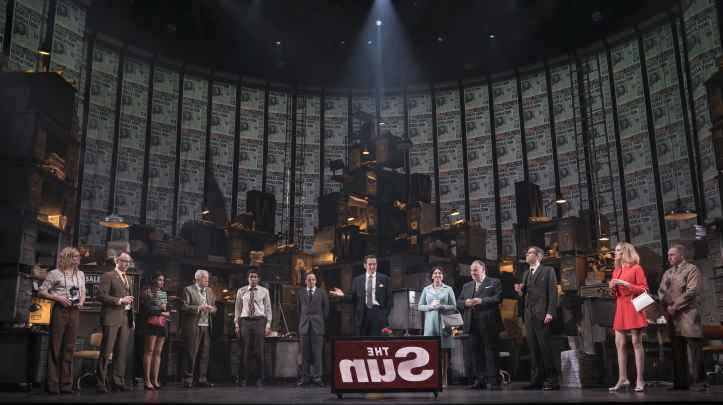 He Says: Manhattan Theatre Club’s INK is All Cap Kinda Wonderful and Powerful

Piled up high with vintage accoutrement on the Manhattan Theatre ClubBroadway stage by set and costume designer Bunny Christie (National/Broadway’s Curious Incident…), the Almeida Theatre transfer of James Graham’s INK takes its defiant stand in two bold and brightly talented spots of light against the British elitisms of London’s Fleet Street in the year 1969. It’s a “fuckin’ good story” told under the rule of five W’s. A captivating and riveting look at the birth of Rupert Murdoch’s media empire, a growth that many (now and then) might refer to as a wild growing weed basking in the Sun of some sort, finding its earth in populist (and somewhat trashy) entertainment to take root. It’s a sordid world I know very little about, but one that always amazed me many many moons ago when I was a naive 22 year old living and working in London, England. This Canadian was shocked and bemused on a daily basis by the topless or semi-nude ‘Page 3’ girl that graced The Sun daily newspaper, especially the Kardashian of her time, Samantha Fox. That woman, although she was not the first, was “the most photographed British woman of the 1980’s” and by far the most well-known ‘Page 3’ girl, but, as this play powers forward, we learn through the backstory that she was not the first. The first was a young Stephanie Rahn, played deliciously by Rana Roy (NBC’s “The Night Shift“) in INK‘s retelling, but her story, although fascinatingly highlighted within the text, is by far not the most interesting part of this captivating trashy David up against the intellectual Goliath newspaper tale. The whole is far more thrilling than the sum of some naked parts.

That clash of the news titans all began when Australian media magnate, Rupert Murdoch and newly hired editor Larry Lamb relaunched The Sun as a newspaper for the masses after a quick turn over and hastily recruited staff of about 125 reporters on November 17th, 1969. They aimed their sights high, “punching up, not down“, challenging themselves to take on the largest newspaper in the world at the time, the Daily Mirror, who’s parent company, IPC had just sold The Sun to Murdoch, basically out of a fear that the unions would disrupt publication of their very successful Mirror if they stopped publishing the original money losing The Sun. The new focus of Murdoch and Lamb’s pure populist entertainment relaunch sent shivers and reverberations down the spines of all the newspapers at that time. Maybe not on the first day, but soon after, because it had an element of their cut-throat business style, believing that a paper’s quality was best measured by its sales, and a whole heap of revenge ladled on top, as both outsiders had reasons to win beyond the obvious; Murdoch, a successful Australian business man always felt pushed out of the high-class club of British publishers, and Lamb, a former senior sub-editor of the Daily Mirror and the northern editor of the Daily Mail in Manchester, knew he would only go so far within the tight high-class structured Daily Mirror. So somewhere deep in that great disruption, playwright Graham (Labour of Love, This House) found his typeface for his play, INK, seeking to tell us a story of the triumph of the underdog, but also give us some insight into the parallel trouble we find ourselves in now when populist entertainment and ‘the news’ gets cross breed.

Within the tight and clear minded direction of Rupert Goold (Broadway’s King Charles III), the examination of that “fuckin’ war‘ of revenge and reporting are unearthed and dug up for our delight; from the moment the compelling and head-strong Rupert Murdoch, played with firecracker dynamics by the phenomenal Bertie Carvel (Broadway’s Matilda) approaches the ambitious and determined Larry Lamb, beautifully and roughly played to heightened perfection by Jonny Lee Miller (Broadway’s After Miss Julie, “Elementary“). Using rivalry and class pretensions as a drive and a thirst, the power-hungry Murdoch found the rapport he needed in Lamb, asking him to go to any lengths to beat their rivals and become the most popular newspaper in the World. Lamb went full throttle, finding the staff to make it happen and the guts to go the distance, even when questioned by Murdoch.  The cast assembled for this production are as flawless and entwined as the gathering of staffers at The Sun, with standouts in the form of Tara Summers (LCT’s The Hard Problem) as Joyce Hopkirk/Muriel McKay and Andrew Durand (Broadway’s Head Over Heels) as photographer Beverley. They give it their all, to the beat of the late 1960’s sound, beautifully creating a moment early on that sets the whole printing press in motion, thanks to the strong original music by Adam Cork (NT’s London Road), stellar music direction by Julie McBride (Broadway’s SpongeBob…), fantastically heightened projection design by Jon Driscoll (Broadway’s Finding Neverland), intricate lighting by Neil Austin (Broadway’s Travesties, Harry Potter…), and wonderfully dynamic choreography and movement direction by Lynne Page (Broadway’s American Psycho). It’s a powerful trip through the trenches, a manic tick tock towards confrontation between stodgy and those nowhere near to being called ‘fancy pants‘.

It’s hard not to look at our television and media outlets now and not see the impact of this darkly Sun-ny tale. It was controversial back then, and it still would be considered just as shocking to this day, if it were to happen in New York City.  The last scene is chilling to watch, as Murdoch digs into his meal with relish. We sit in a modern day America, reeling from the quickly spreading weeds that have sprouted up as a result of this clash reverberating. But back in 1969, they dressed up mutton as Lamb, producing content that would excite the masses even if it disrupted the elite, and then, they just kept feeding the populists peeps until the only place left to go was a ‘Page 3″ spread to drive it over the top. Sound familiar? INK never takes the same bait though, it’s pure thoughtful and exciting entertainment based in the smarts of the war of words and wisdom. A character asks in the beginning to “tell me a good story“, and boy, does Graham do his damnedest to do just that, and wins.