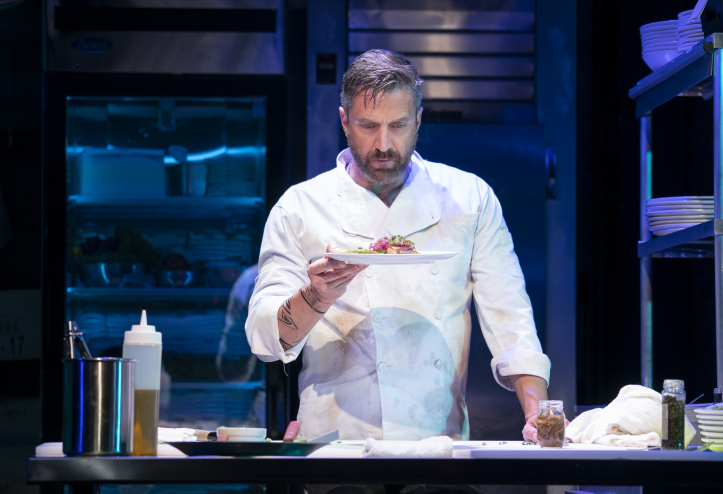 The stove is fired up as the lights come up on MCC Theater’s new play, Seared, and the chef is working his magic with intense finesse, slicing and dicing the ingredients together with just the right balance and edge to achieve coordinated appeal. The genius is in the precision and the passion of the collaborators when MCC serves up this spicy and delectable treat starring the phenomenally talented Raúl Esparza (Encores! Off Center’s Road Show) as the chef god, Harry. It’s his scallops that are his delicacy, but also his downfall. They’re too tasty to recreate, and with that impossibly complicated conundrum, the struggle between the culinary arts and commerce come crashing together, particularly with the arrival of consultant Emily. Perfectly portrayed by the gorgeously clever Krysta Rodriguez (Broadway’s First Date), she’s a brilliant catalyst and a solid unfazed manager of hot tempered geniuses, who has been brought in by the financial strapped restaurant partner, Mike, played strongly and with great emotional detail by David Mason (59E59’s Trick or Treat). He needs some non-combative sanity in his life, but more importantly, he needs this enterprise that he started with his pal Harry to succeed; for him, for Harry, and for the loyal and utterly ‘pure’ waiter Rodney, deliciously portrayed by W. Tré Davis (Public’s Hamlet). But this consultation thrown seemingly haphazardly into Harry’s kitchen is not going to be added into the mix without a hot tempered fight by the chef, mainly because Harry, who holds his eccentricity close to his heart, demands a certain purity of heart and authenticity of ingredients. Or is that what this is really about, or is it some other ingredient that we will need to savor the bite for a bit to uncover?

As written with wildly-appealing aggression and a zest for the psychologically twisted by the strategic Theresa Rebeck (Primary Stages’ Downstairs), the escalating drama sizzles as only a play about cooking could. It’s clear and determined, although not reinventing any sort of wheel. The seasoning is exact and appealing though, with Raúl shining in a part made perfectly for his energy and intensity, It’s a surprising balancing act by one and all, feeding off the flavors given with clarity of vision and focus, thanks to the sharp-edged vision of director Moritz Von Stuelpnagel (RTC/Broadway’s Bernhardt/Hamlet written by Rebeck) who keeps the action searing forward like a well coordinated kitchen should. I’ve worked in enough restaurants in my twenty’s to know that inside the flammable tense restaurant kitchen set, designed by the equally magical Tim MacKabee (RTC’s The Last Match), with exacting costumes by Tilly Grimes (Red Bull’s The Government Inspector), strong lighting by David Weiner (LCT/Broadway’s The Great Society), and clearly flavored sound by Palmer Hefferan (Broadway’s The Lifespan of a Fact) the feast is ‘fired’, and the meal served, divine.

“Every night I go to bed wishing I could cook like that.” An understandable statement made by a fan and a dreamer, one that I’m sure resonates with all spectators, theatrejunkies, wanna-be artists, and dreamers alike. The play surprises us in the end with a spectacularly well-versed assessment, delivered with spark and fire by the phenomenal Davis who has been patiently waiting in the wings for his moment to shine. And boy does grabbing hold of the reins and making us wish we could all cook just like that on stage, or more likely, that every production seen could have that same kind of sizzle. This is a particularly true sentiment, especially when you get to witness such genius creations happening right before your very eyes. Esparza has obviously trained hard for this venture, moving around the space like a true culinary professional in the kitchen, but also as an actor on that stage. It looks effortless, but we know it’s because of some finely tuned skill at work, making us believe the meal served has just happened by magic. But it’s talent, working together, with vision and focus, that makes all those flavors come together in the end.