He Says: MCC’s The Wrong Man is on Fire Body and Soul 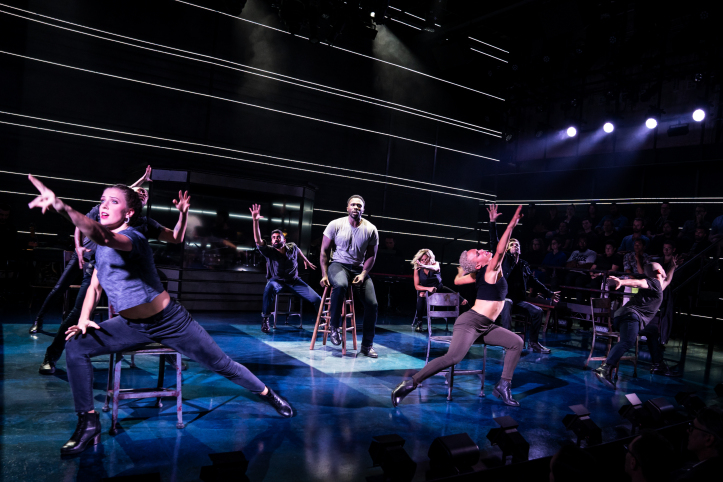 He Says: MCC’s The Wrong Man is on Fire Body and Soul

Come take my hand. With that invitation, MCC Theater‘s The Wrong Manmajestically ushers itself into the Robert W. Wilson Space ever so rightly and emotionally, bringing the darkly clad silhouettes into a spot-lit circle of complex innocence. Mystically placing themselves with smooth precision for the tragedy that will unfold before our disheartened eyes, the new musical pulses with dignity and passion, with a clear organic rhythm that will inhabit your soul and electrify your body.  With a strong book, music and lyrics, all credited to the wondrous BMI Pop Songwriter of the Year (2016), Ross Golan, a heartbreaking hit and run lives and breaths with a physicality that resonates with a kiss and a punch. It’s hard to sit still during the strongly formulated dissection of truth versus opinion, as the music pushes and pulls with power, courtesy of the strong music supervision, arrangements, and orchestrations by Alex Lacamoire (Broadway’s Dear Evan Hansen) and the clear focus of music director Taylor Peckham (Broadway’s Summer…). The pounding in my chest matched the music and the heat on stage, thanks to the sound design by Nevin Steinberg (Broadway’s The Cher Show), with devious delight, filling my veins with the fire of the wide eyed and doomed.

Driven forward by jealousy and rage from another, a cursed man by the name of Duran, powerfully embodied by the explosive Joshua Henry (Broadway’s Carousel, Shuffle Along…), finds himself drawn in by a desperate passion for the steamy Mariana, intoxicatingly portrayed by Ciara Renée (Broadway’s Big Fish, Pippin). It’s darker and more needy than what love really is, but it forcibly screams out loud for all to hear. The desire is drunk and obsessive, even as Duran unknowingly speeds towards an unseen brick wall. With Henry driving the vehicle, it’s clear he’s most definitely the right man for The Wrong Manalongside Renée who layers just the right level of damage and sharp heat, smoothly drawing him in with every little move she makes. There is talk of taking it slow, but the sexual ballet of seduction and rage play out tightly, until the evil goes running, and in a (almost too) quick hard turn, they are thrown down into darkness by a series of hateful acts. Aimed with random precision by the Man in Black, dynamically played by the impressive Ryan Vasquez (Broadway’s Hamilton, Waitress), The Wrong Man is trapped in a vice too tight to escape. Resistance is futile.

Gilman has been playing this same story, one that he wrote years back, in small private shows, with just him, a microphone, and a guitar. He has been captivating his fortunate audiences since the first song was written, with each additional song he has found his way expanding the story into something as heart wrenching as what is now presented before us, “just with more lights“. Determined and thoughtful, The Wrong Man, as directed with fierce focus and determination by Thomas Kail (Broadway’s Hamilton), revels and revolves on a bare set designed by Rachel Hauck (Broadway’s Hadestown). The show might be stronger if the milieux showed more variants and that aquarium for the drummer wasn’t so omnipresent center stage. The lighting by Betsy Adams (Signature’s Daphne’s Dive) could use more intimate focus rather than playing with the overwhelming colorful dotted lines and structure that often left singers just outside of their own light.

The costumes by Jennifer Moeller (Public’s Tiny Beautiful Things) and Kristin Isola (Two River’s Theo) melt the players together into a formulation that felt perfect and united, helping give us the true secondary star of the show. Beyond the stellar performance of powerhouse Henry, the true heat lies within the driving choreography of the insightful Travis Wall (Off-Broadway’s Bare). Wall guides the ensemble, particularly Malik Kitchen, Kyle Robinson, and the incredible Tilly Evans-Krueger, alongside the talented Anook Desai, Libby Lloyd, and Debbie Christine Tjong, into the heart and soul of the piece, expanding and detailing the action and the meaning with grace, power, and pain. All I could do is put my hands up in surrender to the beauty and lines that were being formed by the artful collaboration between body and the beating of the heart. It will encapsulate your blood, and decimate your soul, so find your way to The Wrong Man, and grab hold, while you can.

The Boys From Company, They’ll Drink to That
First Look at Jagged Little Pill