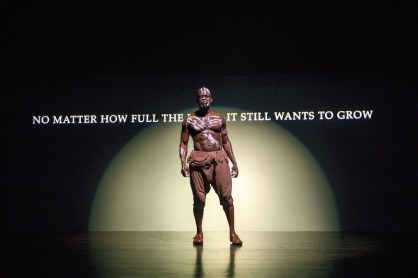 We are greeting with facts and figures as we climb the stairs to the Martinson Theater at the Public. All of them, focusing on the debilitating international ivory trade that is destroying Africa’s wildlife, specifically the elephant population. The first reads: “1 Elephant is killed every 15 minutes“, a devastating statistic, but that is just the first of many.  Mlimas Tale, written by Pulitzer Prize winning Lynn Nottage, the wizard behind such dramas as Ruined and Sweat, is the lyrically beautiful and disturbing tale of the tusk told in a superbly orchestrated La Ronde style structure of pairs. It’s crafted with such empathy and wisdom, determined to tell the step by step tale of the “Ivory Highway“, starting with the powerful Mlima, portrayed by the impressive and statuesque Sahr Ngaujah (Fela!) and ending in a rich man’s home on display for all to see.

As directed by Jo Bonney (Public’s Some People) with an sympathetic eye for detail and human complexities, the journey is a step by step process on characters basically up the financial food chain from the land to the penthouse.  Each layer is assisted by three players; Itos Aghayere (PH’s Familiar), Jojo Gonzalez (Ars Nova’s Small Mouth Sounds), and Kevin Mambo (Public’s The Fortress of Solitude), taking on numerous parts with an ease that is both brilliant and realistic. Wrapping themselves around the problem “that is easy to turn into slogans” (Oskar Eustis, Artistic Director, Public), scenic designer Riccardo Hernandez (Public’s Miss You Like Hell), with solid assistance from costume designer, Jennifer Moeller (Public’s Tiny Beautiful Things), lighting designer Lap Chi Chu (Public’s Oedipus El Rey), and sound designer Darron L West (Public’s King Lear) continue their magnificent work at The Public Theater, finding the essence of the story and presenting it most engeniously. The spectacle is further enhanced with the beautifully engaging music performed by composer and music director Justine Hicks (Prophetika: An Oratorio), transporting us country to country with an ease and mystical air that only furthers the tragedy being addressed. The over all effect is powerful and moving, guiding us through the web of human forces that make up the problematic and illegal industry of poaching. Mlina’s Tale doesn’t try to solve the difficult issue, as it is far too complex to tackle within this presentation, but the white streaked imagery will leave us all stained as we take in the grandness of this animal and the profound emotional response to his death, feeling in someway complicit in the global dynamic.