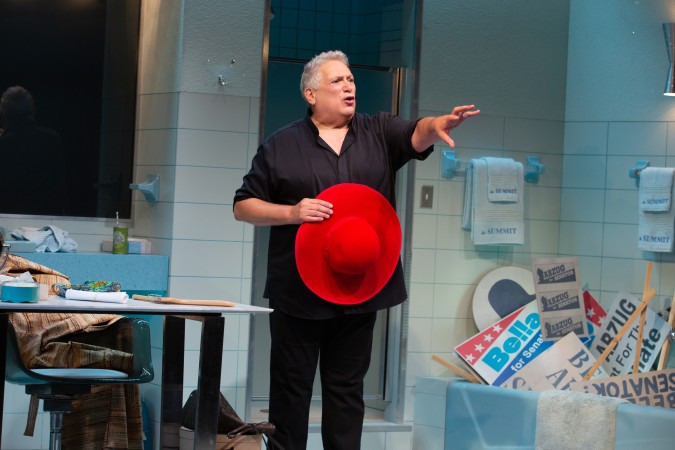 What a gift to the stage. Harvey Fierstein enters, and the audience is his. He can do what ever he pleases with them. He can make them laugh. He can inspire, and he can play, donning the hat of, without a word of discontent, a 1970’s version of the celebrated politician and feminist, Bell Abzug. It’s his Bella Bella for the win, and even though on this singular night, September 1976, that we are invited into for a very personal private space for a wee tête-à-tête with the trail-blazer, winning is what is hoped for, but not necessary what she gets in the end.  What we do get though is a wonderfully endearing and smartly written and performed piece by Fierstein (Torch Song) that is both influential, engaging, and charming, centering itself most deliciously around the world, words, and works of celebrated politician and feminist, Bella Abzug.

As directed with a breezy free flowing air by Kimberly Senior (Broadway’s Disgraced), the dynamic engagement is non-stop. A 90 minute private meeting with the woman who changed politics in America, delivered by that endearing gravely-voiced persona who changed theatre for the better.  Bella has a lot to tell us, about herself and the way she thinks things should be.  Hearing her opinions through our 2019 ears is both wonderfully powerful, and somewhat saddening, as she would most likely be horrified with what happened just three years ago to modern day America.  “Where were the women?” she said and maybe would have said. We ingest that thought and wonder ourselves, particularly because we needed them in 2016 to stand up and be heard in just the way Bella demands of them back then.

Through the very unique voice of Fierstein, both vocally and the written word, Bella Bella goes through the litany of past presidents, and how the system, that she worked so hard for, was designed to exclude. “We see things men don’t“. Women are “more fluid“, “we adjust“, and in that moment of recognition, beautifully presented in this dynamic one person monologue, we must concede. Bella, and Fierstein are right, “unalike is no excuse for unequal“. And the idea hits home with a force.

Backed by the 1970’s modern rectangles and ovals of the Summit Hotel, courtesy of the detailed work of scenic designer John Lee Beatty (Broadway’s Sweat), with straight forward costuming by Rita Ryack (Broadway’s Hillary and Clinton), clear lighting by Tyler Micoleau (Broadway’s The Band’s Visit), touching projections by Caite Hevner (Broadway’s In Transit), and the solid sound design by Jill BC Du Boff (Broadway’s Derren Brown: Secret), Bella Bella is a must see revelation. Not so much about Fierstein, as we know he is a character of epic warm and engagement, able to manipulate our senses and emotion with simplicity and comic energy, but that Bella was such an inspiration.  We need more Bellas in our America.  This Be!!a Be!!a is a most loving tribute to a strong minded force of nature, and even in her losing, she, and Fierstein win big.

Suzanna BowlingNovember 19, 2022
Read More
Scroll for more
Tap
You Are There: Inside Rehearsal for Rockers On Broadway: The 70’s Part 2
Broadbend, Arkansas Lush Score is Thrilling and Reminds Us We All Need To Get Back on The Bus