He Says: NYCC Encores! Soars Up With the Surprisingly Dark Mack & Mabel 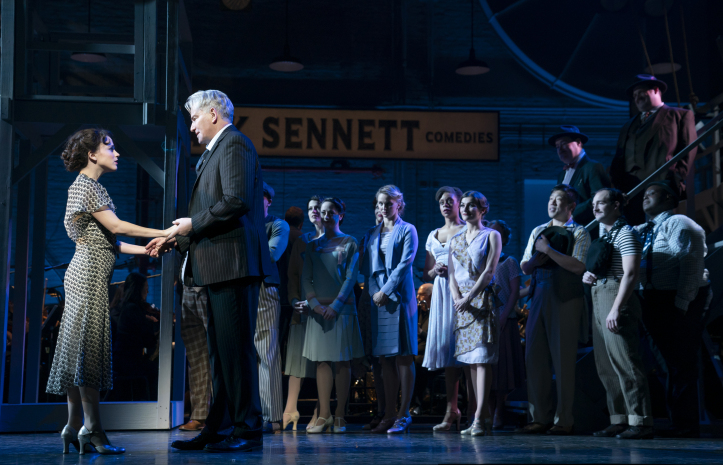 He Says: NYCC Encores! Soars Up With the Surprisingly Dark Mack & Mabel

This is quite the show that comes knocking sometime “after midnight” at the New York City Center Encores!.  “Open up, damn it!” he bellows, and boy, are we happy to let this mand and this surprising show in. It’s just so charming and effervescent, at least for the first little bit, but then we start to notice a few shifts in tone and some treacherous side steps that make one sit up and take notice.  They are subtle, I will say, and not presented with any kind of glare, which is wise. We begin two notice that Mabel, the charming young leading lady of the silver screen, is prone to down a few pre-show pills, something akin to the “Valley of the Dolls” or what Judy Garland famously was known for. And we shiver a bit, knowing how this kinda story ended. So in the flurry of vaudevillian dramatics that get this well crafted revival of the 1974 Broadway musical, Mack & Mabel, up and running, a darker piece starts to step forward from the rear of the studio stage. It sneaks up, surprising us, and as one particularly astute audience member was overheard saying on the way out, “I definitely forgot about all the drugs and murder“, and she’s just so darn right. With all the fun in Act One and all the talk about Happy Endings throughout, this beautifully crafted production about the dawning of the age of talkies doesn’t walk that walk at all, but digs into the darkness, whether we like it or not.

With a compellingly dark and descending book by Michael Stewart (Bye Bye Birdie) and charmingly effervescent music & lyrics by the legendary Jerry Herman (Hello, Dolly!; Mame; La Cage Aux Folles), the NYCC’s production of Mack & Mabel starts out cuter than a button, and then slides down into stereotypical Hollywood darkness. It’s no wonder that back in 1974 when the dichotomy of a show premiered on Broadway starring the astounding team of Robert Preston and Bernadette Peters, it received eight Tony Award nominations, including Best Musical, but did not win but a one. And then quickly closed after only eight weeks. The songs were widely praised by the critics, but the themes of heroin and murder tap dancing inside this infectious pernicious vehicle might have been just a bit hard to fathom and embrace, particularly with a leading man character that was as gruff and rough as sandpaper.

It all begins with a when “Movies Were Movies” set-up that dives in backwards into time, lead by the loud and aggressively hard-to-like Mack Sennett. Basking in the spotlight of the glory days of his 1911 Keystone Studios, film director Sennett, powerhoused by the magnetic Douglas Sills (Broadway’s War Paint) is a man who likes to yell “Action” and see the people around him, including his long-time hungry leading lady, Lottie Ames, dynamically played by the sassy Lilli Cooper (Broadway’s Tootsie), scramble to attention. Inside this revised version by Francine Pascal, the flashback focus is squarely on the tumultuous relationship between comic low-end film director Sennett and his newest discovery, silent movie star-in-the-making Mabel Normand, played to perfection by the amazingly talented Alexandra Socha (Broadway’s Head Over Heels) who he nabs off the food delivery line and delivers up onto the screen for the world to embrace. “What the eye could see, the camera sees better.” I would add to that quote the big wide stage of NYCC as it sees just as clearly. Socha captivates every moment she walks into the room giving depth and flirtatious fun with every line and tune. She breathes life into the wide eyed strong minded Normand, who Sennett cast in his early comic “two-reelers”, and never gives it up, even in the darkest of moments.  Sennett would put her through some pretty strict numerical paces, giving the former Miss Waitress from Flatbush no access to her “integrity as an artist“. That is until it all goes bust, and she stands up to him before falling down the rabbit hole, to no one’s surprise.

The surprises comes later, when Mabel, one of the screen’s biggest stars, starts to slow dance to bigger and better things in the arms of director William Desmond Taylor, gorgeously embodied by the equally stunning Michael Berresse (Broadway’s The Cher Show). His offer to her of just a little bit of dust is just the cherry on the top of the sundae, pushing Mabel into the deep end, and Sennett to not act how he, reminiscently wishes he had. He forges on with a blustery force, replacing her with his ‘Bathing Beauties’ and then the infamous ‘Keystone Cops’, cementing the interpersonal detachment and the decline of the heartbroken Mabel. There’s no amount of dancing, done just spectacularly in said number by Cooper and a band of gorgeously talented dancers, that can tap your troubles away. That is clear, although the staging of that one particular number by director/choreographer Josh Rhodes (Kennedy Center’s Tommy) is the one and only half wonderful and messy moment in an otherwise clean and briskly engaging show. The pantomime of infidelity trips up the tap dancing line, muddling the emotion by mixing it all up too much. Yet we watch on, alongside the handsome and adorable newspaper writer turned screenplay author, Frank, played with old school charm by the lovely Ben Fankhauser (Broadway’s Newsies) as Mabel’s life takes a downturn. He seems to be the one good guy of the group who really has Mabel’s lovely back in mind, but he’s powerless to douse the flame of love and desire that lives so strongly in both Mabel & Mack‘s hearts. If I were Mabel…..Frank would be my rescuer. Just saying…

There are so many meticulously joyful moments in Mack & Mabel, played out well and strong on the bare bones inventive Encores! set. Designed with a clear vision by Allen Moyer (Encores’ Hey, Look Me Over!), with flashy fun costumes by Amy Clark (Kennedy Center’s The Music Man), graceful lighting by Ken Billington (Broadway’s Chicago), and a well constructed sound design by Kai Harada (Broadway’s The Band’s Visit), historic and iconic numbers find just the right edge. “Hit ‘Em On the Head“, performed by the skilled Sills, Major Attaway (Broadway’s Aladdin) as star Fatty Attaway, and Evan Kasprzak (Broadway’s revival of Cats) as fellow performer Freddy, hit the mark with precision. There’s a level of smart play that elicits all that we love about those crazy old silent films, playing a delightful homage to that movie time moment, thanks to the gorgeous work by music coordinator Seymour Ed Press (Broadway’s Dreamgirls), music director Rob Berman (Broadway’s Bright Star) and spectacularly sounding Encores! Orchestra.  There is just nothing better hearing a full orchestra deliver at this high level of expertise.

The engaging and celebrated story of Mack & Mabel, based on an idea by Leonard Spigelgass, delivers the goods and deserves the dime change left over as a thankful tip. I had no idea going in that this feisty flower of a show would end with Mabel’s tragic death from tuberculosis in 1930 after her handsome scandelous lover was shot by a jealous husband, but Happy Endings are for the movies, I guess, and not for every Broadway show in town. It’s a dark twisted journey back into Hollywood lore that pleases at every turn by all the spectacularly dynamic performances the enrich this story. It’s too late to get your butt to Mack & Mabel, I’m sorry to say, as I saw it on its last day of performances, but just know that Encores! is doing their thing most marvelously and if the next two shows are anywhere near as good as this one, you shouldn’t miss one number. I will be away for the next show, Kurt Weill and Alan Jay Lerner’s Love Life(directed by Victoria Clark and featuring Kate Baldwin and Brian Stokes Mitchell), which is just so sad (although I’ll be in London seeing my full share of theatre, so don’t feel too too bad for me), but I personally can’t wait to see Dick Scanlan and Jeanine Tesori’s Tony Award-winning Best Musical, Thoroughly Modern Millie with Ashley Park (Broadway’s Mean Girls) in the Jazz-aged lead. That will be one of those ‘can’t miss’ events, so get thee to Encores!and get ready to applaud.