He Says: NYTW’s Expands the Cycle with a Crowded “runboyrun” & a Solidly Finished “In Old Age” 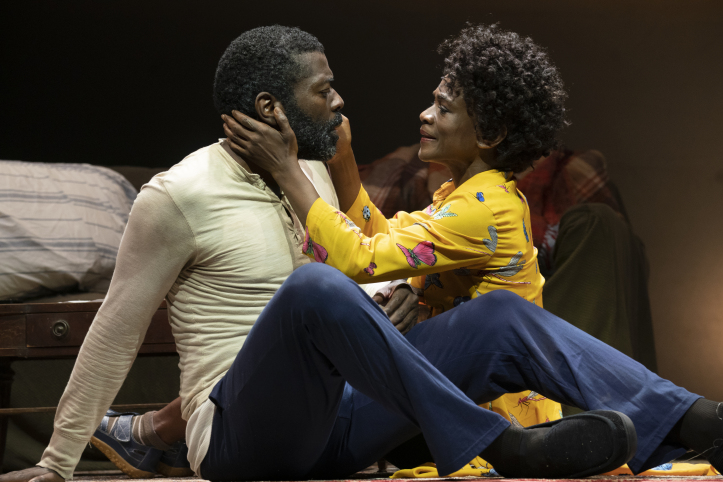 He Says: NYTW’s Expands the Cycle with a Crowded “runboyrun” & a Solidly Finished “In Old Age”

I’ve been here before, in this place where playwright Mfoniso Udofia has dropped her fascinating and detailed characters down into, both worlds that are parallel universes of sorts projecting forward into the future through her detailed and dynamic saga, The Ufot Cycle. It encircles within in nine slices, a powerfully spiritual immigrant story of family and trauma told by a wide eyed genius that sees deep inside the souls of her troubled characters. She parcels them out, packing in unhurried details, and than finds the space and patient deliberations to let them run fully around within the framework. In May 2017 on the same New York Theatre Workshop stage, two one-act plays from that cycle, Sojourners and Her Portmanteau premiered to acclaim. They were the first and the fourth part of her nine segment transportational drama. Now NYTW delivers another powerful pairing; part three, runboyrun and part eight, In Old Age, dynamically uncovering layers and layers of trauma, buried under the blankets and floorboards, powerfully coupled for us to delve into and unpack. It’s genius in its huge majestic scope and connective tissue, one that itches and claws at the skin to be released into the cold air of Worcester, Massachusetts.

Set in the Ufot family’s present-day Worcester home with the 1968 Nigeria Biafran Civil War running rampant up and around their exhausted souls, runboyrun and In Old Age breath more life and sorrow into the Ufot family story. It’s a storied tale about finding a pathway forward, even when tragic history keeps haunting the basement down below. In runboyrun, the man of the house, Disciple Ufot, intensely portrayed by Chiké Johnson (Milwaukee Rep’s Our Town) comes home after a disastrous day to find his wife, Abasiama Ufot, dynamically played by the phenomenal Patrice Johnson Chevannes (CSC’s Mies Julie) hiding herself under a mountain of blankets. She’s trying to keep warm in a cold house, but the layering against the chill resonates far beyond the crumbling sofa. It’s a telling reintroduction to the female center piece of the cycle, but in runboyrun she’s the support network, even if she can barely crawl out from under to engage.

This is her husband’s sad convoluted story, his PTSD enlivened and spinning into a full break from reality, down in the confines of his own personal hell below. When the spirits come around, bringing the hot air and warfare of Nigeria to the unheated basement, they present themselves as something more than just tormentors, but as simple scared refugees trying to stay alive against all odds. Johnson’s Disciple hears them buzzing in the background, and clutching at his leg, but can’t quite grab hold. He tries to chant the quiet young Disciple, powerfully portrayed by Karl Green (Public’s Socrates) and his caring sister, tenderly played by Adrianna Mitchell (Two River’s Noises Off), away, pleading to be left alone in his discomfort and pain. But they don’t pay him any heed. The memory siblings are kind and warm to each other, filling our hearts with their care, but the spiritual manifestations of his older brother, Benjamin Adesola, strongly portrayed by Osakalumi (Broadway’s Equus) and his mother, played with a powerful combative force by Zenzi Williams (Broadway’s The Crucible) complicate the survival tactics of the young pair, uncovering years of harrowing memories that rip into the sanity of the older Disciple leaving him shaking with terror.

Tearing him and his marriage apart, the visage of those tragic events keeps Disciple’s heat on down in that cold basement and in his spiraling psyche. As directed with a complex overlapping by Loretta Greco (Public’s Lakawanna Blues), the fracturing takes on a weighty but overly crowded flight. The circling seems out of control, but in those hectic last moments, the piece finally feels like it is not tripping over itself in that small basement space designed by Andrew Boyce (Rattlestick/Barrow St’s Buyer & Cellar). But living out its potential to climb.

With strong costuming by Karen Perry (PR’s Mothers) and telling lighting by Oona Curley (Vineyard’s Good Grief) the play, in its rotating madness, finally feels blown wide open and not clumsy, even as the parallel universes come cracking and spiraling around us all. The older couple cling to one another, in confusion and desperation, in the same way his mind is pulsating, trying so hard to hold on to reality and his wife. These phantoms are determined to repeat the same painful memory over and over again, flooding his senses, unless, or until they are flushed out into the arms of Disciple’s enlivened worried wife, Abasiama.

The runboyrun tale and the staging is complex and frenetic as somewhat suggested in the play’s subtitle, “Civil War” but the battle is somewhat cluttered at the beginning, with lots of space being left unused while one thin strip of basement is overly crowded with the same air/same feelings of memories long past (it’s also hard to see through the heads of other audience members into that same basement), but In Old Age, as directed with a more centered focus by Awoye Timpo (PR’s The Revolving Cycles…), the new chapter finds a cleaner vision. Abasiama is still hiding underneath a pile of blankets. “This is good for me” she says, and even though the time is far into the future, she is still trying hard to find warmth and safety in that same old house. And then a knock is heard at the door. A real knock. Not the knocking of an angry dead husband downstairs, courtesy of original music composer and sound designer David Van Tieghem (Broadway’s Heisenberg), but a flooring expert by the name of Azell Abernathy, beautifully portrayed by the excellent Ron Canada (Broadway’s Network) who has been sent to salvage the house from disintegrating from under her feet. The reality, though, is that salvation is more for the woman under the blankets than the floorboards beneath her feet.

“This be a gift“, he says, not just to her, but to us all, as In Old Age pulsates with a simple but engaging two handed manner, finding pain and dissociation buried deep within the history of these struggling souls. The loud fervor of anger and hurt from down below reverberates throughout the house, just like it did in runboyrun, but the body-less groans almost carry a more pronounced punch into her ribs. The incessant bangs almost get drowned out by the Christian music blaring from the old television that keeps Abasiama warm and cocooned all day and all night, but not enough to shield her. They still shatter her bones and rattle our brains. They unnerve the old woman at the heart of this cycle, but those sounds are not what disturbs Azell. His history and their engagement do more to unsettle him than any noise ever could.

The two deliver the shiny oak red surfaces with a perfect alignment, balancing  the enactments with one another with powerful precision, as well as ripping up the floorboards of pain below. The play is subtitled, “Purge and Passing”, which feels just about right, as their history and trauma needs to be purged most purposefully from the basement shadows to finally pass away into the night air. The release is given, something Disciple Ufot tried so hard to do in runboyrun. Together these two disconnected characters, and the very fine actors portraying them, come together, giving us a second-to-last chapter in a saga that connects strongly over the jarring bangs of the past. I’m curious what the final chapter, Adia & Clora Snatch Joy, with the subtitle, “Kismet”, will reconcile. And even more curious to see the whole arch played out in succession.

The words that make up the titles and footnotes of her plays are powerful and packed deep with emotions and meaning. ‘Sojourners‘ signifies someone who is on a temporary stay somewhere foreign, runboyrun is a command for surviving trauma raining down from the skies, ‘Portmanteau‘ signifies a bag to carry clothing in while traveling, and In Old Age pulls out an old women buried in the pain of her history so she can finally learn the true nature of love and connection, even when the noise of her past is suffocating the ideal. Crafted with precision by Udofia in order to examine a Nigerian family who find themselves dropped down in 1970’s United States, the interwoven dynamics are bound to be heavy in familial baggage. Stuffed to the breaking point, straining at the latches, desperate to be released, and unpacked before our eyes. It’s a saga that collides and combusts, and must be savored as the long closed PTSD vaults are released to formulate a bridge between two very different worlds.