He Says: Paper Mill Playhouse Unleashes My Very Own British Invasion, But Will It Succeed? 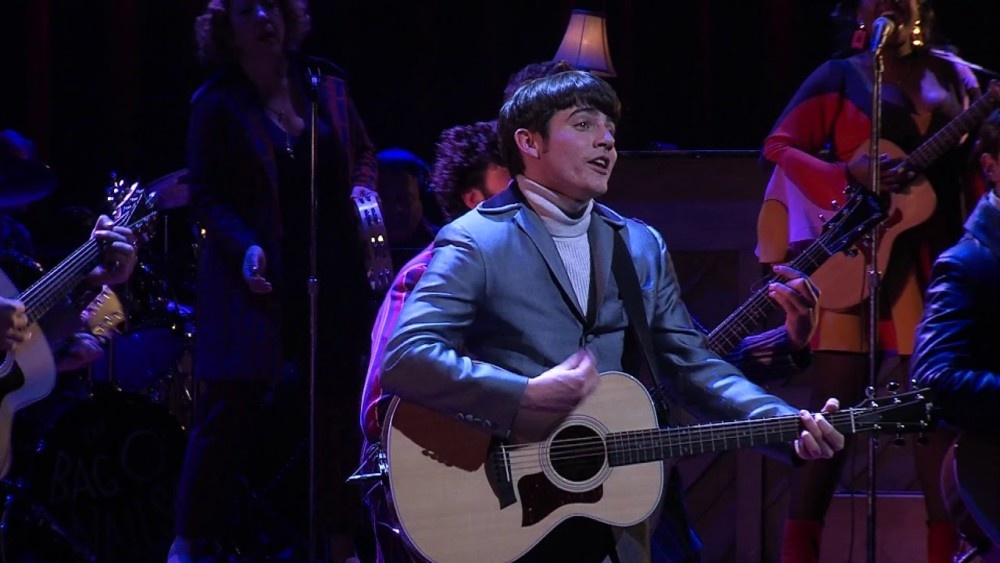 He Says: Paper Mill Playhouse Unleashes My Very Own British Invasion, But Will It Succeed?

In the first few moments of Paper Mill Playhouse‘s new musical, My Very Own British Invasion, patience is said to be one of the key qualities that exists inside a Brit. They lost one big war with America, and then had to wait quite a while until the found just the right army to wage a war they could win. I generally don’t like generalizations though, as I’m unsure that this one is actually true, but with this newly constructed jukebox musical, one that I’m sure everyone is hoping will invade Broadway in the not too distant future, it is definitely a quality that one would need to watch this coming of age tale from beginning to end. With a unfocused book by Rick Elice (Broadway’s Jersey Boys, The Cher Show), My Very Own British Invasion revolves around a fictional and musical battle of the lover/singers, with the prize being a bad girl blonde who can’t seem to focus her mixed up mind.  She’s the Helen of Troy of this story of war, passionately fueling a conflict between the Bad Boy rocker and the Nice Young Man, with the battleground being the stage of the Bag O’ Nails musical hall, the true blue center and war room of the British Rock ‘n’ Roll Invasion.

With “Concept” being credited to the real life pop star, Peter Noone, portrayed by the wide-eyed eager beaver, Jonny Amies (Netflix’s ‘Sex Education‘), the young cute man achieved fame as Herman, the lead singer of the ’60’s band Herman’s Hermits. Getting his act together at the ripe young age of 15, he and his band actually sold over 60 million records and produced dozens of hit song’s including “I’m Into Something Good“, “Mrs. Brown, You’ve Got a Lovely Daughter“, and “There’s a Kind of Hush“.  That’s a true fact of British music history, something that gets a bit lost in this messy semi-autobiographical tale. There are some true to life figures here, while others, fabricated for dramatic purposes, but these Herman hits are real and all here, along with more than two dozen chart-topping songs from all the best British bands of the era, including, The Beatles singing “She Loves Me“. It’s a strong start, especially with Jonny Amies’ stellar performances of these hit songs, ushered in by the pseudo-MC of the night, Geno, portrayed by the wildly talented Kyle Taylor Parker (off-Broadway’s Smokey Joe’s Cafe), giving us a Billy Porter type moment of brilliance and showmanship. He’s wildly wonderful, but I was never really sure who he was, or what he was meant to be, other than someone to hand off the mic to when the show needs some juice, and a few pieces of information spread wide over the audience.

Together with Amies’ Peter/Herman, the two lead us through the tale, introducing us to the cast of wild characters that morphed the bar, Bag O’ Nails, designed strongly by David Rockwell (Broadway’s The Nap), with spot on lighting by Kenneth Posner (Broadway’s Pretty Woman), well structured sound by Andrew Keister (Broadway’s Charlie and the Chocolate Factory), and solid historical projection design Andrew Lazarow (Broadway’s Head over Heels), into a firecracker showcase for up and coming superstars. History tells us that the likes of Mick Jagger, Freddie Mercury, and John Lennon, who is portrayed here by Bryan Fenkart (Signature’s Piece of My Heart) as the man who is responsible for ushering in the underage Peter and buying him his first drink (true fact), were known to hang out here, priming and preparing for the British Invasion of the Americas, a war they will finally win, even though this musical gets a bit lost on the journey.

So far so good, as the music, with supervision, arrangements, orchestrations by Lon Hoyt (Broadway’s Escape to Margaritaville) and Francisco Centeno, Clint De Ganon, and John Putnam also being credited with orchestrations, flies out with a fast and furious 1960’s glamour and speed. It’s intoxicating, the sound, but it is also clear that we are supposed to be enamored by the young Peter, and in general, his fresh sparkly eyed presence is captivating, particularly when he eyes the love of his young life, the blond it-girl, Pamela. As played cheekily by the talented Erika Olson (FX’s ‘Pose‘), she really is the epitome of the magnificent “girl can’t help it” wild one, a troubled piece of vague neediness dressed in period perfect Tiggy star-ness by costuming Gregg Barnes (Broadway’s Mean Girls). She casually plays with the heart of the cute young Peter, knowing all the while she is already attached and inexplicably drawn to the bad boy rock singer, Trip, played with wild abandonment by the sexy long-haired Conor Ryan (off-Broadway’s Desperate Measures) bare chested in a pair of tight pants. The triangle is set, and the war within the British Invasion has begun, even though we all know how the cards have been dealt. The only suspense now is how the cards will be played.

The three, along with every other member of the cast hold their own, singing passionately and strongly within the onslaught of British period classics. There’s energy and excitement in those songs, and 60’s era appropriateness in the dancing and hurried mayhem of moment across that stage is electric, running around the stage like mad hatters on their way to tea. Here’s where patience becomes key, because as directing and choreographing by Jerry Mitchell (Broadway’s Kinky Boots) that battle just keeps playing out endlessly for  over two hours, with Pamela bouncing back and forth between the two like a bi-polar sex addict who lost her medication along with her sense of reasoning. We all know that Peter is the kind sweetheart of the tale, most likely to succeed in all ways but love. We also know that Trip is a full-blown narcissist jerk, who speaks of love but knows nothing about its true weight. Why she keeps going there, back and forth between the two as quickly as she falters and falls into drug addiction and chaos on the road in America, is beyond us all, especially once the second act gets cranked up. Once Trip calls into play his overbearing one-note muscle, the meathead Hammer, played by Daniel Stewart Sherman (Broadway’s Kinky Boots) to man handle and bruise up the young Herman singer, the war is over. Or at least I stopped caring who was going to win.  That’s the point I gave up on Pamela, and basically became a Social Worker to the young Peter, wanting him to find the self-esteem to stop mooning over the messed up Pamela. He needed to get over that bad girl, and fast. Not exactly the love story we could get behind.

My Very Own British Invasion is filled to the brim with great songs, spell-binding performances, and brilliant 60’s dancing. The atmosphere is on fire, but the focus is unclear, at least in the book and the dramatization. It needed to be either silly and fun, or serious and period perfect, but floating back and forth, like Pamela’s meandering heart, doesn’t do the trick of making us care, at least for her and the choice she has to make. Luckily the music is good enough to win a war against America, but maybe not one on Broadway.

RossSeptember 17, 2022
Read More
Scroll for more
Tap
Is My Very Own British Invasion Headed To Broadway?
On the 60th Anniversary of “The Day The Music Died” Bucks County Playhouse Brings Back “Buddy: The Buddy Holly Story”