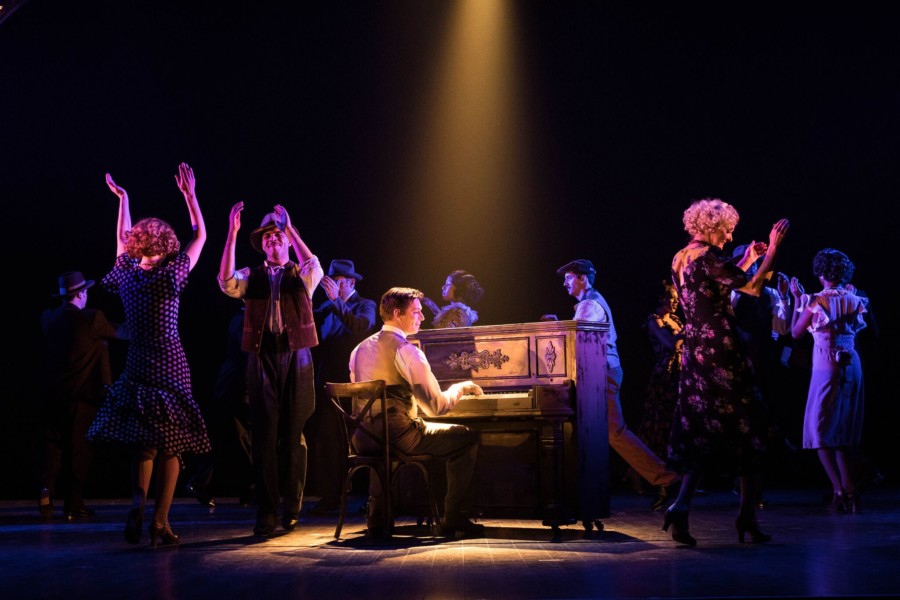 He Says: Paper Mill Playhouse’s The Sting is On Tap Dancing Fire

He Says: Paper Mill Playhouse’s The Sting is On Tap Dancing Fire

I’m pretty sure we all have the same gut reaction when we hear the first few bars of “The Entertainer“, that piano melody by Scott Joplin.  It instantly brings to mind that 1973 caper film, ‘The Sting‘, a pretty perfect movie that this new musical is based upon.  Images of Robert Redford and Paul Newman, in their prime, looking devilishly handsome come floating into our collective mind. Snapshots of these two playing charming grifters in the America of 1936 with that perfect balance of wise guy and smooth operator, all with that sly wink and a sparkling smile. The two big-screen idols plot to con a wealthy mob boss out of a whole lot of money, and we are with them all the way to the end.  It was an instant classic, nominated for ten Academy Awards, winning seven, including Best Picture, Best Director and Best Original Screenplay. And with those first few cords played on a piano somewhere off stage at the Paper Mill Playhouse, The Sting, a new musical from book writer, Bob Martin (one of my favorites: The Drowsy Chaperone) with music and lyrics by Mark Hollmann and Greg Kotis (Urinetown), and additional music and lyrics by its famous leading man, the magical Harry Connick, Jr., draws us in, wonderfully but obviously. We smile with the memory, but hope this show has more up its sleeve than a rehash. Luckily, our hopes and dreams are granted, because within a few beats, the music twists itself around, and showers us with something new and exciting to hold onto.  The musical itself is giving us a cute wink and a nod, letting us know that although the grand and enduring memories that the film elicits will be honored dutifully, we are going to be given something more, and something unexpectingly different. And that, my dear friends, is a very good thing.

The first number is glorious, setting it all in motion with some jazzy sounds and some quick dance moves. “You Can’t Trust Nobody” engages us quickly and solidly with the three main men at the emotional core of this story.  They’re dancing and charming us in to the story, introducing us to the soulful beating heart of the show, Luther, played with an instant warmth by Kevyn Morrow (Broadway’s Bandstand). His chemistry is solid and we embrace his presence whole heartedly, an engagement that is completely required for this story to work. He is joined in the scam by the firecracker young con man, Johnny Hooker, who sails around those staged streets with a swagger and a voice to die for. He is played by the ultra-talented J. Harrison Ghee (Broadway’s Kinky Boots), and accompanied on this journey is The (sweet) Erie Kid, joyfully played by the perfect Peter Benson (Promises, Promises).  In regards to Benson, “I did not see that coming“, is all I can say, as his smaller part is big time fresh and funny, without overdoing it or distracting from the thrill of the con.

After a quick game of pant/package switch within a tight con, the three relish in the adventure with the exciting “Thrill of the Con“.  The sense of fun and joy fills the stage, running itself up and down the stairs of this well executed set, designed by Beowulf Boritt (PM/Broadway’s A Bronx Tale). The tap dancing is electric, athletic, and metaphorically emotional, thanks to some miraculous work by choreographer Warren Carlyle (the current Hello, Dolly!) and some sharp direction by John Rando (PM’s The Honeymooners).  That praise is only cemented during the first number that opens up the second act, “This Ain’t No Song and Dance“. When it is over, you will have to work hard to hold your tongue, and not shout out to those amazing actors on stage, “Yes That Was!“.

After a devastating loss, one that is so solidly orchestrated, Hooker and his buddy, Erie, are on the run and looking for revenge. Then sliding in, casually, on the back of an upright piano, is the big star name of the show, the phenomenal Harry Connick, Jr. (Broadway’s The Pajama Game, for which he received a Tony nomination). He’s tapping those ivories as only he can, playing with Scott Joplin’s tune and escorting it into the winning “Ragtime Rip“.  As con man Henry Gondorff, the charming and handsome Connick is tailor made for the part, but it’s really his voice that has brought him to this stage.  He sings with a smooth beauty that exists in a universe all his own, engaging and making us swoon.  He’s almost too good at being Connick, Jr. in some ways, taking us all a wee bit out of the running of the show, and into a pseudo-music hall concert, where all we want is more Connick, and less Gondorff. It’s not surprising though, his crooner of a voice is so velvety that it might just be too big or good for the part.  Does he fill Paul Newman’s shoes? Well, that’s a tall order, but he does have the chops and the vocal talent to make the comparison unimportant.

It’s no wonder the gorgeous Billie, played effortlessly by the magnificent Kate Shindle (Broadway’s Legally Blond), can’t take her eyes of Gondorff, but also knows his and her limitations.  She doesn’t get enough to do here in The Sting, singing only one song, “Sometimes“, but beyond that, she is given the task of slinking around looking amazing and delivering line and line sharply and with a wise-guy attitude. She’s a strong help though in the running of the main con, playing her part in the thieving of mob guy, Dowle Lonnegan, played by the fine Tom Hewitt (Broadway’s Doctor Zhivago). But it’s really the secondary female part, Loretta, played by the delectable Janet Dacal (Hal Prince’s Prince of Broadway) that takes some of the spotlight away from all those handsome and talented men running around on stage.  Her initial duet, as she plays and teases Hooker at the diner, “Some Say” makes us want to ask that she return to the stage real soon for a quick coffee refill, as she is missed later on.  But then she returns, and delivers that second strong cup, with the torch song “Nightime is Better” that makes us so glad she returned.

The style is perfection, with stunning costumes by Paul Tazewell (Hamilton), lighting by Japhy Weideman (Dear Evan Hansen), and sound design by Randy Hansen (Macy’s Thanksgiving Day Parade). The old-fashioned title cards, an idea pulled right out from the film, are a nice sweet touch, connecting this highly engaging musical with the classic film honorably. Sometimes the songs stubble a bit at the beginning, feeling a bit lost in their lyrics and notes (music director/vocal arrangements: Fred Lassen; orchestrations: Doug Besterman; dance music arrangements: David Chase), but they eventually right themselves, so being a bit patient with The Sting is important as every song eventually finds its way.  There should be a fair amount editing in regards to the metaphorical dancing moments to quicken up the pace in both acts. Those transitions are beautiful but sometimes pointless, only slowing down the action rather than amping up the excitement levels for what is to come.  Because what we really want is to get to the races quickly as our blood is flowing and our heart is racing with anticipation for the main con that makes up The Sting. “The First Race” and “The Second Race” are genius in construction and execution, hurtling us along with the horses and the con, but in the overall end, it is the slippery foot work and sliding tap dance moves that are the thrilling and energizing bread and butter of the show. So good, they can’t be ignored, and possibly they are even better than Mr. Harry Connick, Jr. playing that piano. But just barely. And that is quite the compliment.

All I can say, as the curtain comes down on the cast of The Sting, is a great line from the show, “Damn, they pulled it off” and they did it brilliantly.