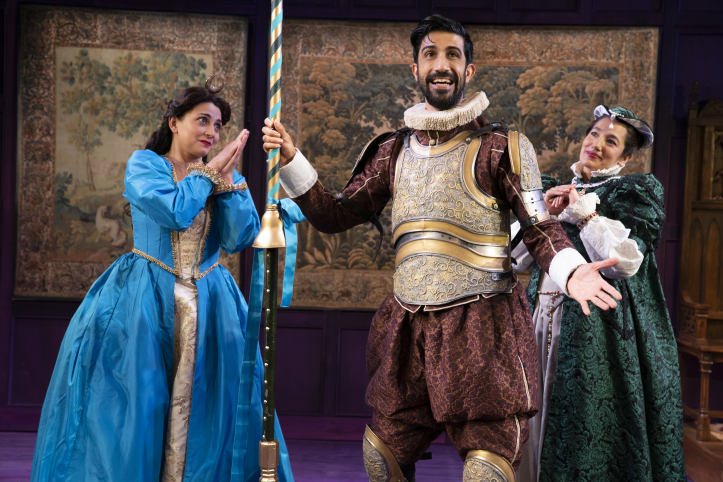 “All the while, they wonder, what roles are they defined by? Will they ever transcend them?”

“This is exactly what Playwrights Horizons should be doing”, said my good friend as we walked out of the theatre into the cool early fall night. And he had intrinsically encapsulated the whole evening with one quick statement. Because that is exactly what it is all about. Finding your own singular voice, and singing it out into the world.  Daring the off-Broadway audience to see into the ferociously funny satiric edge of Jaclyn Backhaus’ new play Wives, and discover all the new and thrilling ideas of language, structure, theme, and presentation, where anything is possible when blending politics and theatre. Backhaus (Men on Boats, India Pale Ale) formulates a smart study of feminist framework and faith in the future, if the right questions are asked, that speaks to our funny bone through our inquisitive intellect. The play also grabs hold of our limbs and forces a different narrative forward into the light of day. Questions seem to be at the root of this muscular joy of a play, noting that Backhaus writes in the playbill, “the answers to these questions are subjective, and the answers to these questions are often questions.” And when those questions are asked within Wives from one character to another, and to us, the answers are complicated and dense, but thoughtful and dripping with meaning and raw force.

Divided into four distinct but interwoven parts with an initial royal fanfare of delightful subversion, Wives, as directed with precision and wit by Margot Bordelon (Vineyard’s Do You Feel Anger?), at first gives us one thing, and then, with a quick “I dare you, bitch” dives headfirst into another, one that is more deliciously daring dynamic than the usual story. Playing roles that are seemingly both stereotypical and archetypical, the insurgent shift happens, as if their positions were blazoned across the chest in bold print, the magnificent and gifted three: Purva Bedi (PH’s Dance Nation) as Wife 1 (Queen Cathy and others), Adina Verson (Ars Nova’s The Lucky Ones) as Wife 2 (Cook and others), and Aadyna Bedi (Soho Rep’s Passage) as Wife 3 (Diane and others), tackle a past gender specific model that is so desperate in need of revisionary thinking, carving out a new feminist horizon from our historical traps.

With Sathya Sridharan (NYTW’s An Ordinary Muslim) as the one and only Man (King Henri and others), the multitudes are reduced, one ingredient at a time, as the women conjure up a spicy stew of magical proportions with hopes that it will make everything about this whole and right. Putting forth a spell to expand the feelings and give voice to those who are only seen as “holes with blinking eyes“. It’s powerfully and radically fun and hilariously off balance, while never really being entirely straightforward.  With a strong clear visual appeal by scenic designer Reid Thompson (RTC’s Too Heavy For Your Pocket), with costuming by Valérie Thérèse Bart (Pearl’s Vanity Fair), lighting by Amith Chandrashaker (Soho Rep’s Fairview), and sound design and original music composed by Kate Marvin (TFANA’s Happy Days), each setting presents what happens when the crushing weight of the Great Men of each segment is lifted off the backs of those amazing women, and they are allowed to untether themselves from traditional roles and storytelling. The first two segments, diving into the castles and kitchens of King Henry II’s 16th Century France, and the Hemingway cocktail hour of 1960’s Idaho, the three women form a wonderfully engaging and ridiculously ingenious pack of warriors defying the patriarchal clichés of the period constructs. Completely magnificent they are, sharing truths and desires that should have always been said.  The other two segments, India in the 1920’s to the present day college experience of female writers and scholars, doesn’t live up to the same level of sharpness, although the message to untether oneself from the visions made by men remain focused. The comedy registers wisely and solidly, framed by required stances for the modern age. I got a bit lost in the final formulations, but the dare pays off in the whole, so thank you Playwrights Horizons for seeing clearly that the magic potion and incantation of Backhaus is so needed to battle the patriarchy that is breeding and breathing so freely before us.

“And how good does it feel when a tyrannical force (external/internal) fucking dies?”

“Give her another hundred years, I concluded…let her speak her mind and leave out half that she now puts in, and she will write a better book on of these days” – Virginia Woolf, A Room of One’s Own