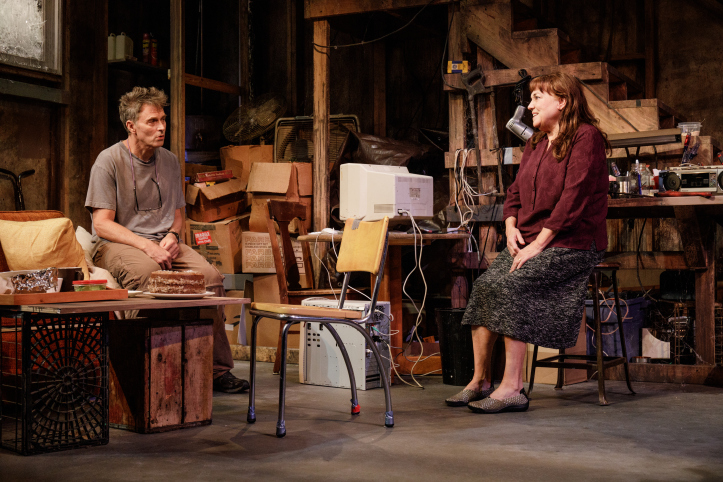 Down the cellar stairs we go to meet up with the Dalys, the real life brother and sister acting team in Theresa Rebeck’s tense new drama, Downstairs presented by Primary Stages at the Cherry Lane Theatre.  Rebeck, the widely produced writer of Bernhardt/Hamlet, Seminar, and Mauritius to name a few, has tightened the screws on this family psycho-drama giving us a strangely compelling and transfixing thriller that floats back and forth bridging genres with quick handed ease, daring us to believe or disbelieve in one thing and then another. It begins with family unease, teasing out the dynamics between a grown and troubled brother and his straight laced married sister, Teddy and Irene, beautifully crafted by the magnificent Daly siblings (first time on stage together); Tim Daly (Broadway’s Coastal Disturbances, MTC’s Fear of Flying at 30) and Tyne Daly (Broadway’s Rabbit Hole, Mothers and Sons). They breath in and out a complicated history while unpacking psychologically disturbing conflicts that clash and embrace the family bonds that bind. There is strong concern and fear in Irene’s eyes and cautious questions are tenderly bounced off Teddy’s hyper nervous paranoia, ticks, and dysfunction. It’s a two-handed play just waiting to be unravelled, but then, with the appearance of Irene’s husband booted feet on the top steps of the stairs, the pieces that mean one thing start to shift and turn into something quite different. Surprisingly and expertly entangled.

With each descending step of Gerry’s, played with a calm and perfect air of viciousness by John Procaccino (MTC’s Our Mother’s Brief Affair), Downstairscarefully digs in deeper into the dark recesses of Gerry and Irene’s basement, perfectly articulated by set designer Narelle Sissons (Primary Stages’ Happy Now?), with subtle mood lighting by Michael Giannitti  (Broadway’s Joe Turner’s Come and Gone), exact costuming by Sarah Laux (Broadway’s The Band’s Visit), and a solid and quiet sound design by M.I. Dogg (Broadway’s Straight White Men). The chill and dread of this triangular thriller quickly seeps into our veins like the cellar’s dampness into our bones, tensing our spines and raising the hairs on our skin. It’s a strongly and secretly orchestrated creation by Rebeck, shocking us with her ability to put us on the edge of our seats without us really seeing what’s she has ahead for us. We’re a bit lost, and surprised to find ourselves holding our breath when we first glimpse the slow stepping down as Teddy stares horrifyingly into that old computer, feeding our minds and begging the question “what the hell is he up to?“.

It’s disturbingly paranoid, the play, feverishly directed with precision by Adrienne Campbell-Holt (Colt Coeur/NYTW’s Zürich) as we watch both of the Dalys’ hypnotized horror with what is being seen on that screen.  At first we wonder if Teddy is really to be believed with all the post-it note scribblings piling up on the edges of Downstairs, fearing, like Irene, that his talk of the Demon and evil is just the last straw off the psychotic camel’s back breaking the walls of sanity. But then our perspective gets shifted, somehow, casually and cleanly by both of the Tim and Tyne’s intricate work and word play.  “You have to look at things with compassion“, Irene states, but maybe that’s a lie she’s been telling to herself and to all others for years, masking a fear-based immobility, with the real question stinging both siblings the hardest, “how much is one person supposed to take?” Filling out the overly cluttered and wordy Downstairs with just a bit too much of Tim Daly’s detailed dementia, tinged, quite possibly, with some sort of true prophetic vision, Rebeck delivers a tense psychological thriller layered with paranoia and the threat of violence erupting at any moment. It’s a bit of a tease, this ratcheting up, threatening us with something bigger than the quick resolution we get. We applaud Tyne’s quick steps, giving us a showdown Downstairs that satisfies, but not completely. It floods the family dynamic with obscured light, never really revealing the dark details, but letting our minds wander through the dreading conjured ideas that we can disturbingly imagine all on our own.