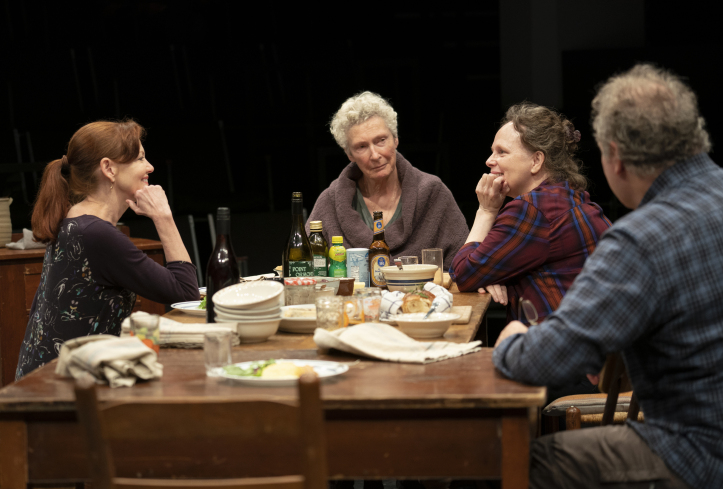 It’s hard not to know pretty much what you are going to be served, in general, as soon as you walk into the Public’s LuEsther Theater to see Tony Award-winning playwright/director Richard Nelson’s new play, The Michaels: Conversations During Difficult Times.  They all seem to be about just that. I did not see his Apple Family Plays, but I was fortunate enough to be present for The Gabriels, his three part play cycle (I saw two out of three, which ain’t too bad) about the election year that destroyed my faith in America and all it stands for. I didn’t know it then, when I was sitting in the theater watching The Gabriels discuss and unpack the complications of the election battle between Hillary Clinton and the Orange Monster, but looking back at that year from 2019, my vantage point is smeared in deceit and impeachable offenses. Disagree with me all you want, but I can hear the facts lining up, even through the GOP noise and alternate fact finding missions they seem to be operating from.

This may seem off topic, but it’s hard not to go there as we see the typical Nelson stage setup.  The kitchen tables sit, ready for the company to put together, piled with chairs that will seat the expected souls of the Michael family for dinner, filled to the edges of the stage with interpersonal dynamics. The stove just sits there, waiting to be utilized for a meal that will be made before our eyes over which those dynamics will be unearthed and commented on. “This might be the best day of your life” is playing overhead, and we hope, as we wait for the telling of familial tales and war stories, boring the girls and caressing our senses with its expected intelligence and warmth. It’s clear from the get-go, that The Michaels , as traditionally designed by Jason Ardizzone-West (Public’s Illyria, NBC’s “Jesus Christ Superstar Live in Concert“), with lighting by Jennifer Tipton Broadway’s To Kill a Mockingbird), sound by Scott Lehrer (Broadway’s Hello, Dolly!), and costumes by Susan Hilferty (Public’s Fire in Dreamland) and Mark Koss (PMP’s The Little Mermaid), will not swerve to far from the Rhinebeck road where the Apples, the Gabriels, and now the Michaels live, not glamorously like their rich new neighbors, but simply and artistically. The model is steeped in familial tradition and natural engagement, as the uber-talented cast makes this beautiful trip just for us, even in the rain, to the shores of this kitchen, breathing sighs into the darkness between quick sharp scenes, giving us hope that all this will be helpful to our collective national discomfort.

They come, en masse, to organize and distribute, as they normally do, the pieces of the puzzle that will make this space their own. Nelson has brought together a cast made up of regulars; professional and expertly trained in the art of authentic casual discussions on difficult subjects. The usual suspects have all gathered at the aging celebrated choreographer, Rose Michael’s house, delicately portrayed with fire and flash by Brenda Wehle (NYTW’s Mary Jane), who is faltering against oncoming health issues. She is tired and in pain, but firmly attached to family and her new romantic partner, retired teacher Kate Harris, gingerly well played by Maryann Plunkett (Bernadette Peters’s replacement in Sunday in the Park with George in 1985) who has moved in to the home in order to help take care of her during these troubling times. Their relationship feels warm and earthy, like the meal that Kate quietly makes in Rose’s kitchen. But there is a slice of something that doesn’t sit well in my stomach, a separateness that is not just in Rose’s complicated connection to her past, her healthy, her work, and now her own failing body. But it’s in their entanglement that feels shaky. She’s an “interesting woman, even though she’s not a dancer” it is said of Kate, but we sit back and let the aromas waft through our soul, knowing full well that all will gingerly be revealed in good time (two hours without an intermission) through talk and the added ingredient of dance. At least we have this to eagerly await, wondering how this new spice will change the flavor in the upcoming meal, or will it be the typical and expected world views discussed, just on a different colored floor board and a unique musical soundtrack as backdrop. “You look worried“, but time will tell.

Rose’s ex-husband, David has also just arrived, beautifully embodied by the glorious Jay O. Sanders (Sir David Hare’s Stuff Happens) with his wife, Sally who was also one of the original members of Rose’s dance company, sharply portrayed by the always interesting Rita Wolf (The Flea’s Emma and Max). They are the weight and the solidness of The Michaels, as they know his work and fill it out fully with ease. They are joined by another original dancer from the golden days of Rose’s illustrious career, Irenie Walker, gently portrayed by the strong minded Haviland Morris (MTC’s Aristocrats), who has come to help the two young dancers; Rose’s daughter Lucy, strongly played by Charlotte Bydwell (Irondale’s Paris!) and her cousin, May Smith, sweetly underplayed by Matilda Sakamoto (92nd St YMCA’s Interrobang), find the authenticity in the steps of some of Rose’s most iconic choreographic works that will be presented in a retrospective. Courtesy of the fine work by choreography consultant Gwyneth Jones (Dan Wagoner and Dancers from 1984-89) and dance coach Sara Rudner (Twyla Tharp’s The Catherine Wheel, Milos Foreman’s ‘Hair‘), The Michaels finds an added place for conflict. Even when the interaction drags, the piece tap dances the ideas forward and the extra adds to the ordinary.

The engagement of mother/daughter choreographer/dancer is at least a new addition to the repetoire of Nelson, and it breathes life into a structure that is losing its electricity, at least for me. “That’s a nice little dance“, and as a new part of Nelson’s critically acclaimed Rhinebeck Panorama unfolds, the structure of the meal, slowly and intricately being organized and made, step by step before our eyes, is in need of some invigoration. “Please be more confident than that“, Rose says to her daughter as she performs her old dance steps, giving meta-advice to what Nelson might need as well.  The new drama, placing the audience directly into the kitchen as dinner is cooked and eaten, amidst conversations about art, death, family, dance, politics, and the state of America, rarely transcends its source. There is true depth of character, blending humor with humanity. It is emotionally moving and thoughtful, with grace kindly folded into the mix with gentle patience. Its simple gestures and elegant acting doesn’t let us down. But what is needed is more of Rose’s snarl and fierceness, upsetting the commonplace and routine just enough so this play, a new addition to Nelson’s canon, doesn’t feel like an overly scheduled funeral, or a tedious 5 1/2 hour film centered on the mundane tasks of meal making and home care. Because that one, as described in The Michaels sounds like true torture. Luckily, this play isn’t either, even as it appears to embrace some similar constructs.

Suzanna BowlingJanuary 12, 2022
Read More
Scroll for more
Tap
The Tank presents BrandoCapote Intriguing my Mind, but not Satisfying my Soul
We Will Rock You Comes To Madison Square Garden For Just Four Days and We Were At The Meet and Greet