He Says: Rattlestick’s Novenas for a Lost Hospital Flies Like a Butterfly Lovingly Transporting Pain and Loss 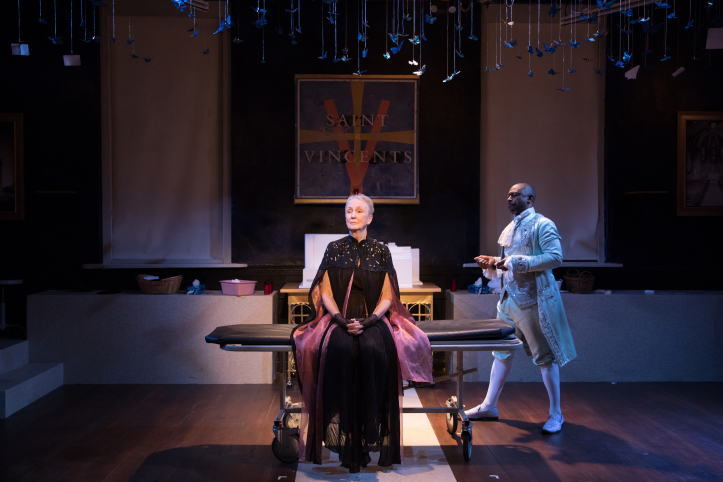 He Says: Rattlestick’s Novenas for a Lost Hospital Flies Like a Butterfly Lovingly Transporting Pain and Loss

Filing one by one down an old horse lane into an enchanted enclosed courtyard, the communal theatrical experience, created by playwright Cusi Cram (A Lifetime Burning) and Rattlestick’s Artistic Director Daniella Topol (Ironbound), begins to construct itself from the ground up. The ghostly spirits realign, giving us a musical cleansing experience backed by period play and disco anthems. It’s a soulful albeit oddly scattered beginning, as the world premiere of Novenas for a Lost Hospital floats the memories of those lost to plagues and tragedies upward into the night air like blue butterflies on the breath of saints.

The remembrance play sets out to celebrate the 161-year-old Catholic institution that once sat strongly and boldly just down the street from the church where the majority of the play takes place. Fancy condos sit there now, garishly smiling down telling us all to forget, but this experiential march pleads the opposite. In the heartfelt meandering vision of a past all that is connected to St. Vincent’s Hospital, from the green open door sanctuary to the AIDS Memorial down the street where the play solemnly ends, strikes out forward, floundering and flying in a complicated past and present. The storied piece hits the mark the majority of the night, but fades in and out of connective consciousness. The examination tries to encapsulate all that transpired in the hearts and minds of those involved, failing at times, but finding the heart beat just often enough to keep us hopeful throughout its steadfast 2 1/2 hour flight. It’s a tearful dig down into dismissal, death, and devotion of past trauma where it collides with our soul, exploring  a convergence of beliefs and duty played out by a crew filled with the conviction of those determined to inform.

A novena, from the Latin word for nine, is an ancient tradition of devotional private or public prayer said nine times over successive days or weeks. Or in this particular case, nine prayers said in succession for a lost ideal and cause, something that the venerable St. Vincent, the patron saint of hospitals, would have bowed down for. Novenas for a Lost Hospital sets out to remember and celebrate, nine times over, the institute named for him, St. Vincent’s Hospital. The history of the often lamented institution that is sorely missed by those touched by its caring hands resonates within this construction, but the main draw that brings me to this Rattlestick event is the tragic but beautiful history of care and attention this Catholic hospital gave to the thousands of HIV/AIDS patients that arrived at its doors in need of treatment and who were not welcomed in the same manner elsewhere.

In the press release, Dramaturg Guy Lancaster writes, “St. Vincent’s Hospital was started inside a rented house on East 13th Street in 1849 during a cholera epidemic by four nuns from the Sisters of Charity. It was the first Catholic hospital in Manhattan. Survivors of disasters such as the sinking of the Titanic, the Triangle Shirtwaist Factory Fire and September 11th were treated at St. Vincent’s after it moved to its eventual site on 7th Avenue in 1856. A devastating new plague, HIV/AIDS, would profoundly affect the institution and the surrounding neighborhood from the 1980s onwards as the hospital became a center for AIDS research and treatment. By the time St. Vincent’s closed its doors on April 30, 2010, 3,500 employees had lost their jobs. The last Catholic hospital in Manhattan was replaced by a luxury condo development.”

The conflict of ideals and faith play a central role in this dissection and autopsy, guided through by the awe-inspiring Kathleen Chalfant (Off-Broadway’s Wit, For Peter Pan on Her 70th Birthday) portraying Saint Elizabeth Seton, the first American born Saint. She was a woman not of her time, who found the passion and the direction inside to create, in a drafty old brownstone, an institution that would grow to become this beacon of hope for so many. Inspired by the thousands of caretakers and patients of St. Vincent’s Hospital, all portrayed by a devoted crew made of  Ken Barnett, Goussy Celestin, Justin Genna, Steven Jeltsch, Alvin Keith, Shayne Lebron-Acevedo, Kelly McAndrew, Noriko Omichi, Rafael Sánchez, Laura Vogels, and Natalie Woolams-Torres, Cram attempts with a soulful conviction to unearth the hospital that many called “the soul of our city”. Drawing forth an army of ghosts from underneath the brand new condos that sit on that very same lot, she brings the discouraging and tragic history to life, as if resurrecting its bleeding still heart like Lazarus on a hospital bed.

There is a powerful core inside this exploration, and through the succession of nine ceremonial prayers, the elements of all that was lost and gained dance through the convoluted tale with love and compassion, coaxed forward by choreographer Edisa Weeks and composer Serge Ossorguine. It’s hard to find fault in the construct, as the mission is clearly greater than the confines of a standardized play. Its pulse is found and lost within moments of each other though, surprising us with connection, and then dissipating the ties into the night air. The funny moments, joyfully embraced by the young college students that I was surrounded by, were a gift, but hard to take in at times for this particular audience member. All that beauty that was lost felt far too close, personal, and central, as if I could almost hear them fluttering around my head. The recounting of all the unbearable things that happened over and over again on Spellman 7, told with heartbreaking honesty by the wonderfully engaging Ken Barnett (CSC’s Cradle Will Rock) and two nurses from numerous eras, played to perfection by Kelly McAndrew (ATC’s Good Television) and Natalie Woolams-Torres (Public’sTiny Beautiful Things), strikes hard filling my eyes with tears. The two caretakers unearth the complications of history and religion with fearless soul, giving us layers that I wasn’t aware of, while sitting alongside Barnett’s steadfast commitment to staying alive.  His searching survivalist soul finds love in the arms of the ever-so-appealing rollerskate-dancing AIDS patient, dynamically played by Justin Genna (Summer Rep’s The Little Dog Laughed). Their entanglement gives the piece a centralized heart, helping us all to find our roots within the earth below. “1-2-3 Jump” is the group dancing anthem for holding onto the optimism found within the gravity of heaven as the bells chime for the lost hospital and those that died in its rooms and hallways.

As directed with fluctuating intensity by Daniella Topol (Rattlestick’s Ironbound) under a flock of recorded butterfly stories, the lovely and warm Chalfant guides us gently and compassionately through the hospital’s sorted and complicated history. She is gifted with a tender heart and soulful delivery, alongside our other guardian, the 18th-Century hairdresser and philanthropist Pierre Toussaint, portrayed with conviction by Alvin Keith (Broadway’s Cat on a Hot Tin Roof) who wonders if he should have in fact, burned it all down in retaliation (not the hospital, but the church who turned him away after taking his donation). He questions his own action of being quiet when he should have yelled, and that the “wrong thing could have been the right thing” at the time. A compelling idea to examine as the threads of death abound in the space designed by Carolyn Mraz, with costumes by Ari Fulton, lighting by Stacey Derosier, and sound by Brian Hickey and Sinan Zafar. Novenas tries to sound the same alarm, quietly suggesting that Silence does in fact equal Death, and the community and big money let this important institution flatline because of neglect and mismanagement. The piece never fully finds its full formulation, even as we parade, candle in hand, down the street, past the condos to the new AIDS Memorial. The attempt to connect to our pain and loss under those white modern bands didn’t register (maybe because of the distractions of the big city) but Novenas does, in the confines of the second floor sanctuary, locate its heartbeat and its passion for life and love.

So serve me up one whiskey neat, or three, and let me drink to those lost to AIDS, Cholera, and all in between. They fly like butterflies above us. We remember you and mourn the institution that was once the caring soul of our city.