He Says: Sea Wall/A Life Swims Even Stronger on Broadway 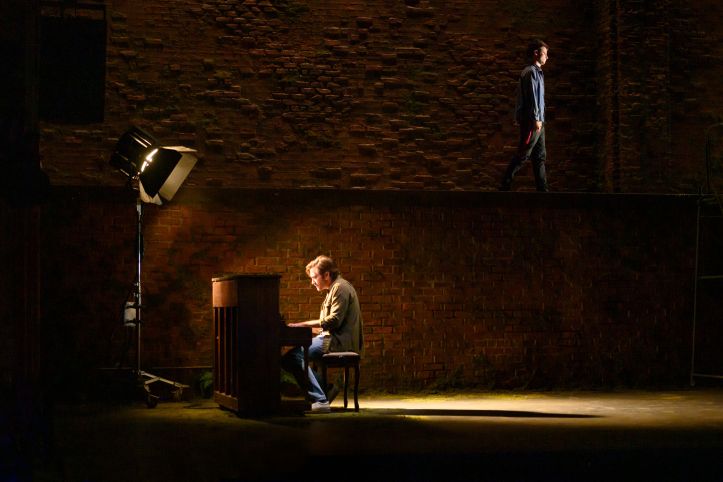 He Says: Sea Wall/A Life Swims Even Stronger on Broadway

“Read me a story“, says one young girl, as told to us by her father. And these two fathers do their duty. Story-telling is what this double hitting evening of one-act plays is all about once the lights get turned on. Paired together with radiant pleasure and pain as directed with empathy and clarity by Carrie Cracknell (National’s Blurred Lines), both monologues tease out their tales with precision and expertise. They dive in deep, swerving back and forth between waves, all wrapped around the condition of what it is like to swim in a father’s ocean of grief, anger, joy and the hopefulness of humanity.

Sea Wall/A Life are solidly created bookends holding their pieces of tragic fiction in place on a bare simplistic bi-level stage courtesy of designer Laura Jellinek (Broadway’s Oklahoma!), with empathic engaging costuming by Kaye Voyce (Broadway’s True West) and Christopher Peterson (Todd Haynes’s film ‘Dark Waters‘), a steadfast and delicate sound design by Daniel Kluger (PH’s I Was Most Alive…), detailed original music by Stuart Earl (Almeida’s Oil), and spot-on lighting by Guy Hoare (Young Vic/West End/BAM’s A Doll’s House) and quiet projection design by Luke Halls (Royal Court/Minetta Lane’s Girls & Boys). Each tell somewhat similar but diametrically angled stories of the extreme edges of life and tragedy, just as they did when first performed at The Public Theater early this year. But somehow through a more focused vision, the two stories surprisingly jab harder here on Broadway even in the larger theatrical space. The pair attempt to explore that gaping jagged emotional hole that is born when life comes into existence, and gutted when it is taken away. It’s the best bits of a man, experiencing life and death as a son, a father, and a husband, peppered with strong waves of crashing metaphors, and sliced between ‘way back then’ and ‘sometime close to now’.

Sea Wall clicks instantly into place with the Tony Award nominee Tom Sturridge (Broadway’s 1984, Orphans), snapping the lights on to shed light on his third collaboration with Tony and Olivier Award winner Simon Stephens (Heisenberg, On the Shore…, Wastwater). Both have a richness in their voices that when crushed together under the waves of the unknowable strength of the Sea Wall leaves a gash of heart break on our collective hearts. Sturridge engulfs us in his captivating telling, steeped in the Northern Ireland swag, parceling out his two-pronged tale with tension and an edge for suspense. There is true beauty and pain in Stephens’ writing and, most especially, Sturridge’s delivery. It’s born on the backside of all that is deemed of value to this simple man, and then parceled out to us on Sturridge’s incoming tide of powerfulness.  His sentences drop off leaving us dangling like a swimmer at the Sea Wall. It’s a truly mesmerizing performance, pulling us towards his love and hurt like a strong undertow that will leave us gasping for air and battling the waves to survive.

After we catch our broken hearted breath, Academy Award nominee Jake Gyllenhaal (Broadway’s Sunday in the Park..) saunters onto the stage in a similar fashion to Sturridge. Flipping the power switch but then struggling to find his circle of light. It’s a perfect re-entry, keeping us at bay wondering what his own grand artistic collaboration with the fantastical detailed Nick Payne will be, and how if would expand or contrast with the previous confessional. Payne, the playwright who gave birth to one of my all time favorite Broadway experiences, Constellations, doesn’t shy away from the challenge set before him by Stephens. Payne and Jake dive in, matching the pace and manner of Sturridge, but with some delicately different tones and connections.  His pacing, flipping from one aside to another, is a bit more abrupt and his delivery more funny and charming than emotionally dangerous. We can’t help but care deeply for this man, even as I pray for him to dig deep into the pauses, giving us a chance to see the flip-side of fatherdom through Payne’s eyes. It’s definitely compassionate and engaging, but never finds its way over the Sea Wall into my pounding heart. It’s not as breathless and damaging to our souls, unless maybe one can relate personally to the loss, rather then just empathetically connecting to the pain and contrast.

Payne’s A Life doesn’t have the intense punch to the gut like Stephens’ Sea Wall, even though both deliver their tale with a clear sense of purpose and authentic connection. Balancing one another with a focused grace and a clear paternal care, both ends of the spectrum fill the Hudson Theatre‘s space with a touching ease. It’s the creation of life and the taking away of that same gift that is simplistically engaging and direct, even when these men are at a loss for the right words. Both do a phenomenal double duty in the way each jumps around to the backside of each emotional moment with a clarity of vision and heart. They each systematically climb the hill to give us two different breathtaking views of the complexities of humanity and fatherhood. It’s about being a man, without worrying about their masculinity. The pleasure is pure and gratifying, especially once we struggle back to the surface and catch our much needed breath of air.