He Says: Signature Theatre Sets Fires in the Mirror Reflecting Back the Historic Presently 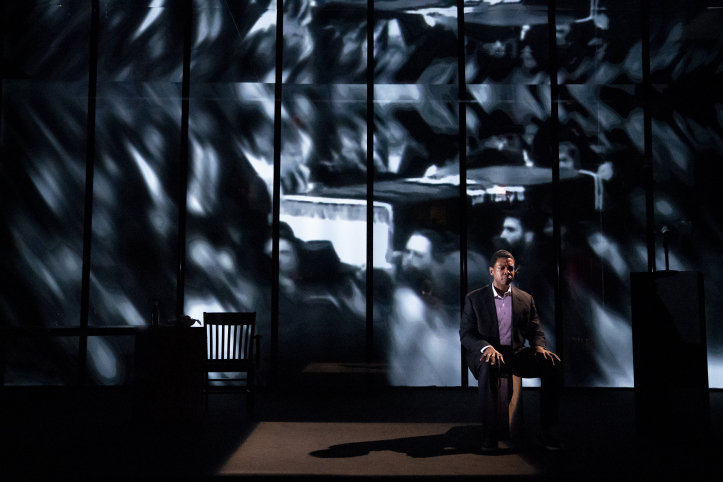 He Says: Signature Theatre Sets Fires in the Mirror Reflecting Back the Historic Presently

It’s a different time and a different actor commanding center stage, but the power of Fires in the Mirror currently playing at Signature Theatre still glows hot with potent energy reflecting back a relevance that is saddeningly current. Written by Anna Deavere Smith from interviews conducted surrounding the Crown Heights race riots of 1991, her summations of unique characters float out like burning embers, blown on the winds of hate, disappointment, and fear. “When things fall apart“, Smith says, “people speak in the most stunning, communicative, even musical ways” and in her gentle smart editing of other people’s notes, she patchwork sews a storied recreation. It’s a revelatory vantage point; a studied look at a moment in New York City’s history when the black and Hasidic communities of Brooklyn collided into one another with a destructive force, combusting into a fire so aggressively that the whole city was almost consumed by the explosion of anger and hate.

Sadly, our nation still sits at the same intersection, somehow digging itself in deeper into the racial trenches of hate warfare. With layers upon layers piled up, the fine work of investigative theatre shines the blinding light right back into our very eyes. Standing before the reflective surfaces of dividedness is not Smith this time around, but Michael Benjamin Washington (Netflix/Broadway’s The Boys in the Band), taking over the performance reins from the earth goddess, embodying each and every one of her creations with determination and clarity.  He never fully inhabits the stage nor the characters like Smith can and did in this piece or in the very compelling Notes From the Field back in the fall of 2016, but he doesn’t falter or stumble in the big shoes she has given him. Smith found a way to morph into these others, losing her physicality in their words and presence, a skill Washington doesn’t possess to the same level. He finds shades of personality, but doesn’t manage to change the structure of self like Smith. What he does though, is confirm the importance of the piece as written, and its lasting needed place on the shelf within a world scrambling for deeper understanding of the past and the present.

With the focused smooth direction of Saheem Ali (LCT’s The Rolling Stone) and through the researched and edited words supplied by Smith, Washington delivers the disjointed pieces of the puzzle with intelligence and clarity. He finds the way to tell the story of the race riots through intricate alterations, delivering the explosive collision course that was ignited after a car, driven by a Hasidic Jew, swerved and killed a young black boy at an intersection in Crown Heights. What followed was a layering of parallel universe reflections; puzzle pieces that could never all fit together into one uniform story board. The accidental murder of that child was followed by rage, finger pointing, and, tragically, a murder by a group of black men of an Australian Jewish student walking unbeknownst of the trouble brewing blocks away from the accident.

It’s clear that Smith knows her power well and Washington understands the complexities that are fueled by historical rage and animosity. Played out on a shiny reflective structure designed by Arnulfo Maldonado (ATC’s Fireflies), with understated costuming by Dede M. Ayite (Broadway’s Slave Play), concise lighting by Alan C. Edwards (Vineyard’s Harry Clarke), and distinctive sound by Mikaal Sulaiman (Soho Rep’s Fairview), the overall effect pulls us in. The piece is well produced, delivering the detailed goods with grace and determination, but not much emotionality. Washington doesn’t hold the stage with the transformative weight of Smith, but that’s a tall order, as she is at the heart of this emotional undertaking. Fir someone who had never seen her embody these creations, Fires in the Mirror does find its way to reflect back history into the present with sly and sharp meaning.