He Says: Signature Theatre’s The Young Man From Atlanta Reviewed From Toronto 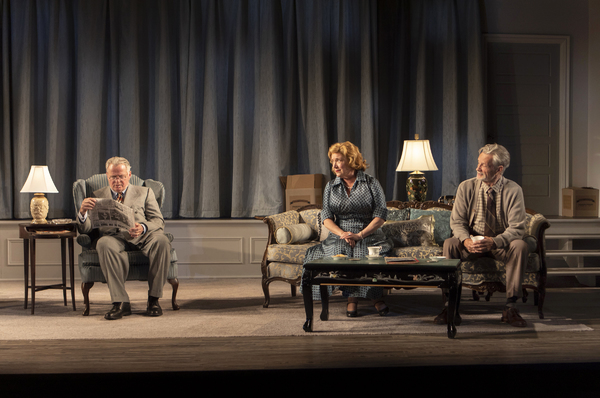 He Says: Signature Theatre’s The Young Man From Atlanta Reviewed From Toronto

Before Christmas, I had the pleasure of seeing Signature Theatre’s The Young Man From Atlanta, a beautifully written play by Horton Foote (The Trip to Bountiful). I then moved out of my Brooklyn apartment, taking most of my belongings to Canada, where I will be spending half my week working at a group psychotherapy practice. It was quite the move, one that will not take me away from my duties of an Outer Critics Circle member, nor divert me from my obsessive theatre viewing [in reality, it just adds another realm to it, as I’ve already received my first press invitation for a play at Soulpepper Theatre, Canada]. The week was stressful, spending hours packing and driving, unloading and reorganizing, and somewhere in all of the commotion, I lost my notes and scribbles on this play and the Signature’s production. The play closed soon after with my new adventures starting up in Toronto, but the idea that I had yet to write my review about this production nagged at me, hanging over my head like an unspoken secret, so here goes.

First produced Off-Broadway at the Signature Theatre in January 1995, The Young Man… was well received, noting its tender power and a quiet disruption coming from the undercurrent of  a “Nameless Menace“, as stated in The New York Times review. In Foote, there is always a surface veneer of polite humanist interaction, but underneath, a darker element tends to hide itself; something painful, shameful, and ultimately unspeakable. One fine actor once told me that to get Foote right, one has to clearly understand both, and play both with gentle assurance. As directed by Michael Wilson (STC’s The Old Friends), The Young Man From Atlanta mostly gets the idea, but somehow this play, one that garnered Foote the 1995 Pulitzer Prize for Drama, never fully connects on that deeper, more disturbed level. It floats on fine performances and detailed personal dimension, but fails to find the pain encrusted in the core, leaving us entertained, but never disrupted.

It’s the spring of 1950 in Houston, Texas and Will Kidder, played determinately by the well cast Aidan Quinn (Broadway’s A Streetcar Named Desire), finds himself being pushed out from the Sunshine Southern Wholesale Grocery. The job was always a place of identity and pride since he first started working for them in his early 20s. More deeply upsetting, is the fact that he is being replaced by Tom Jackson, strongly portrayed by Dan Bittner (ATC’s Farragut North), a young sweet man that Will had trained for success within the company. Now Will has to go home to his newly built “no finer house in Houston” and tell his loving wife Lily Dale, embodied by the always unique Kristine Nielsen (Broadway’s Gary…) the upsetting and shameful news. It’s not going to be easy, as they are both struggling in their own determined way to deal with the shocking death of their only child. Lily Dale is a trembling mess, unable to find peace in the tragedy, and this news might topple any sense of stability they pretend to have. Will, determinedly, holds onto the idea that he will surmount this obstacle and achieve once again. He is the sole provider of this troubled family and he can’t and won’t let this capsize their very existence.

Surrounded on all sides are strong actors; Devon Abner (Broadway’s Dividing the Estate) as Ted Cleveland, Jr. and Jon Orsini (TNG’s Whirligig) as Carson. They all dive into neatly defined parts giving space and time to ideas of class, structure, and the new world order of business and life, where age, experience, and connections mean less and less and youthful energy means more. Stephen Payne (Broadway’s Straight White Men) as Pete Davenport delivers the strongest slice of heart and fragile compassion as Lily Dale’s beloved step-father, as well as the always engaging Harriett D. Foy (NYTW’s The House That Will Not Stand) as Clara, the devoted maid, and Pat Bowie (Broadway’s The Trip to Bountiful) as a former maid to the family, Etta Doris, who stops by to have a reminiscent look at the couple after hearing their tragic news from Clara. The two African-American maids give a sly gaze into their privileged lives, but in this particular production, the side-lined stories fair to register as needed or required viewing.

The set, designed by Jeff Cowie (STC’s The Orphans’ Home Cycle) with lighting by David Lander (Broadway’s Torch Song) delivers a complicated road block of sorts to the tender interpersonal drama that is at the center of this tragedy. It’s too wide and large framed, while simultaneously harnessing the actors into a too confined space near the front of the stage to actually utilize or even move around in. It distances us with its clumsiness, distracting from the fine costuming by Van Broughton Ramsey (Circle in the Square’s The Widow Claire) and solid sound design by John Gromada (Broadway’s The Best Man).

The broken-heart of the matter is a tenderly told story of Will’s only son, Bill, who had moved to Atlanta, but who oddly and suspiciously drowned six months ago. Quinn’s Will delivers the scenario with a strong sense of knowing but denying, suspecting his son, Bill actually committed suicide, but never formulated the obvious reason. His ideas are unspeakable, especially with the nervous Lily Dale, who refuses to consider this option, instead believing that his death was some sort of an accident. Bill’s Atlanta roommate, the unseen Randy Carter, has been trying to contact Will, but Will will have no part of that conversation, believing that all the young man wants from the family is money. Lily Dale has another view of Randy, and a different approach to this particular “Young Man from Atlanta“. The play refuses to mention the word ‘gay’, but the unsaid shouts loudly with a painful punch that hangs heavy over the unpacked living room.

“Where’s your Christian faith?” But on that flat awkward stage, the idealogical ebb and flow doesn’t feel real or all that complicated.  The dark secret fails to produce a strong impact or an emotional energy, even as it lingers powerfully over the written piece.  I watched, was engaged, but never moved by anyone or anything within the production as a whole, except for maybe the twisted play for poor Pete’s savings. That produced a feeling of empathy and concern, but I don’t think that’s what Foote had in mind when he wrote this play. He was trying to find a more complex engagement, one that isn’t found in the Signature production.