He Says: So in Love am I with Roundabout’s Kiss Me Kate 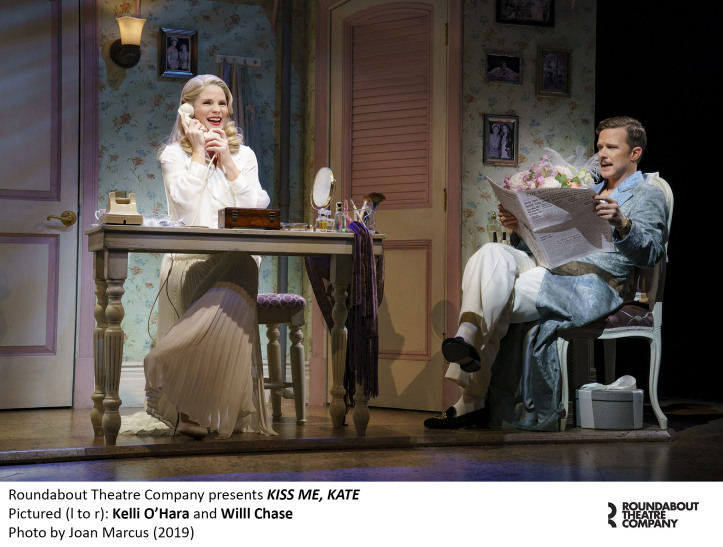 He Says: So in Love am I with Roundabout’s Kiss Me Kate

It’s a glorious return, this Roundabout Theatre revival of Kiss Me Kate. “So in Love” is all I can say about this “Too Darn Hot” musical, written by Samuel and Bella Spewack (1938’s Leave It to Me!) with music and lyrics by Cole Porter (Anything Goes). It swings its backstage door wide open right off the bat, flying the festivities forward on a whole slew of talented dancing feet as “Another Op’nin, Another Show” is ushered on the vocal strengths of Adrienne Walker (Disney’s The Lion King) as Hatti, the backstage mistress to the stage star. The musical treat hits it high in the sky, and keeps this clever musical version of William Shakespeare’s The Taming of the Shrew neatly wrapped up beautifully within a musical that soars strong until the happy ending. My heart skips a beat when the phenomenal Broadway leading lady star, Kelli O’Hara (Broadway’s The King and I) saunters in and takes her dutiful place center stage. Her presence lets us know that all is good in this Baltimore theatre, especially when that perfectly pitched voice of hers sings forth.  This is only just the opening number of this very fun festive delight of a show, perfectly cast (although I had my doubts walking in) and staged to delight, song after fantastic song. Thank you Cole Porter, I’m eternally grateful.

I must admit that I generally find some of the musicals from the 1940’s time period, a bit ‘dusty’ and repetitive, like South Pacific and the never-ending reprises that are not so enchanting as some, but Kiss Me Kate never feels stodgy, at least not as directed here at Studio 54 Theatre with buckets of bravado by Scott Ellis (Broadway/RTC’s She Loves Me) and choreographed with style and finesse by Warren Carlyle (Broadway’s After Midnight). This on and off-stage deliriously fun conflict of a show, reminiscent of the 1978 screwball musical, On the 20th Century, was Porter’s brilliant response to Rodgers and Hammerstein’s Oklahoma! (another Broadway bound show that I can’t wait to see this spring), and other musicals of its time, integrating the music and lyrics to connect firmly to the book. It’s twisted and fun, this musical version of The Taming of the Shrew, strutting and bouncing out front, while backstage the battle that lands somewhere between love and hate rages on almost more intensely than out front.

So Kiss Me Kate, because in the beginning, middle, and end, it’s all about the star power within the show within a show, and with Kelli O’Hara as Lilli Vanessi playing the Shakespearian shrew, Katharine singing out the gloriously  funny “I Hate Men“, one can hardly go wrong. I wasn’t sure going in that O’Hara would be up to the sharpness of playing the snappy shrew, as I think of her as that lovely lady from The King and I, but I was completely mistaken. She rises to the level of goddess with the long ringlet hair; some solid work by hair and wig designer, David Brian Brown (Broadway bound Moulin Rouge!), throwing herself into the fights and tantrums with aggressive haughty delight.  She flings herself headfirst into the conflict so perfectly with her ex-husband, Fred Graham, who also plays her Shakespearian co-star and suitor, Petruchio, dynamically portrayed by the gloriously voiced Will Chase (Broadway’s Something Rotten!), creating a chemistry so on fire, that it’s obvious they should either kick or kiss. Chase is so wonderfully arrogant and mischievous in his role (s),  gifting us with the hilariously smart “Where is the Life that Late I Lead” leading us down a path quite happily to do battle for everything this dashing theatrical hero holds dear. Kudos to fight directors Rick Sordelet and Christian Kelly-Sordelet (Broadway’s Wolf Hall) for their hard and detailed work. At times I worried about the game and gifted O’Hara, fearing that the stage star might come face to face (not in a good way) with that glorious stage that she is so worthy to stand upon. Please be careful with this dynamo, we need her to survive.

Secondary to the screwball dynamics of two powerhouse ex’s acting out to our delight their aggression, there is also Lois Lane, the actress playing Bianca, played to the wide-eyed hilt by Stephanie Styles (RTC’s Kingdom Come). This lady is a true star in the waiting, just like she is in the musical within the musical. She scores solidly with her stellar number “Why Can’t You Behave?” aimed at her gambler boyfriend, Bill, portrayed to tap dancing perfection by the uber-talented Corbin Bleu (Broadway’s Holiday Inn). The two’s chemistry is so super fun and appealing, killing their hot song and dance number, “Tom, Dick, or Harry“, with help from Will Burton (Broadway’s Hello, Dolly!) and Rick Faugno (RTC’s On the 20th Century), tearing up the Shakespearian suitor duel with aplomb. I wouldn’t be able to choose which one either, Miss Bianca, but Styles’ Lois does tells her bad boy Bill most gorgeously, that above and beyond all of her flirty mannerisms with others, she is “Always True to You in My Fashion“, summing up her devotion to the troublemaker deliciously. All Bleu’s Bill can do in reply is give her the most ceiling-tapping extravaganza, “Bianca“, blowing the socks off all other tap dance routines as of late. With a performance like that, all must be beyond good in the backstage corridor of the spacious Baltimore Theatre, just like it is onstage out front.

Even beyond the secondary, the talent doesn’t dare falter. Terence Archie (NYCC Encores’ 1776) as the totally wrong man for Lilli, Harrison Howell, richly delivers a strong “From This Moment On” backed by the exquisite work of music director Paul Gemignani (“Mary Poppins Returns“) with orchestrations by Larry Hochman (Broadway’s The Prom). All the music rings out in an elegant and lush detail, with a jazzy panache that turns “Too Darn Hot“, as lead by Paul James T. Lane (Broadway’s King Kong), Bleu, Walker, and ensemble, into a sizzling sexy treat for the eyes and ears, secretly shining out in the theatre’s alleyway. It taps and taps its way into our souls, invigorating the humid hot air with style and sass of the resplendent.

The soft-shoeing Vaudevillian “Brush Up Your Shakespeare” performed with joyous delightfulness by the wonderful John Pankow (TNG’s The True) and the engagingly funny Lance Coadie Williams (Broadway’s Sweat) is another fine fun moment, taking us back to the good ol’ days of Broadway and acts of this nature. Kiss Me Kate is just that kinda show; one of the finest old musicals around. And lucky for us, it is getting a spectacularly solid revival by Roundabout. The show first premiered in 1948, winning the first Tony Award for Best Musical, and was Porter’s only show to run more than 1,000 performances on Broadway. The first Broadway revival in 19999 starred Marin Mazzie, Brian Stokes Mitchell, Amy Spanger, Michael Berresse, Ron Holgate, Lee Wilkof and Michael Mulheren, and won the Tony Awards for Best Revival of a Musical and Best Actor in a Musical for Mitchell, with the lovely and talented Marin Mazzie receiving a Tony nomination for Best Actress in a Musical, and Michael Berresse, Lee Wilkof and Michael Mulheren receiving Tony nominations for Best Featured Actor in a Musical. I remember that production, and although I only have small flashes of its fun, this modern revival shines just as bright or even brighter. With a glorious set by David Rockwell (Broadway’s The Nap), sharp colorful costumes by Jeff Mahshie (Broadway’s Next to Normal), warm and glowing lighting by Donald Holder (Broadway’s Oslo), and clear and solid sound design by Brian Ronan (Broadway’s Mean Girls), the show and its cast doesn’t miss one well placed pratfall or prance. It’s stylish and swanky, overflowing with handsome suitors, talented beauties, and one gorgeous shrew, each and everyone worth their weight in comic screwball gold. I’m sure this Kiss Me Kate will be back wrapping its strong arms around another batch of Tony nominations late next month, kissing and hugging them with love. Love does always win, in the end.