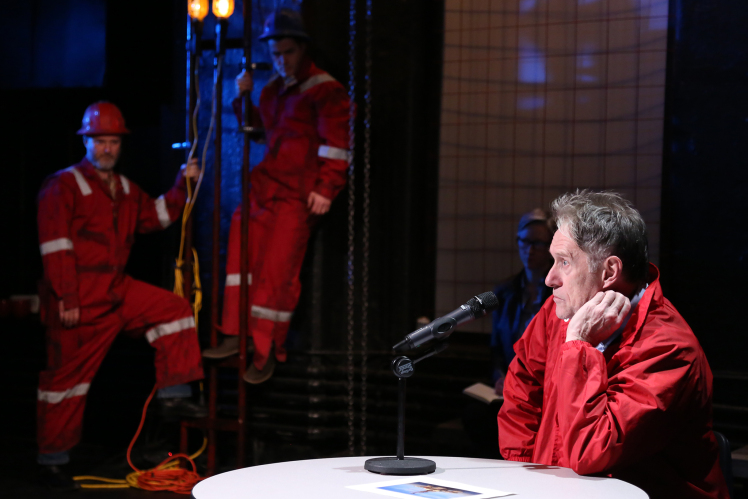 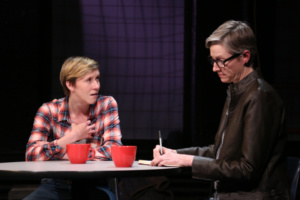 In the same way that others look at me oddly when I tell them that Come From Away, the musical currently on Broadway centered on 9/11 and the week after that terrible day, is the must-see feel good show of the spring season (Dear Evan Hansen is still my number one of the 2016/17 Broadway season), I looked at the email from Suzanna, telling me Spill, the play about the Deepwater Horizon oil spill disaster that happened on April 20th, 2010 is a must see play of the month (sadly it closes April 2).  And she wasn’t mistaken.  It’s a deeply powerful ensemble piece, meticulously written and directed by Leigh Fondakowski (Head Writer of The Laramie Project) with an exacting attention to scientific detail without losing one bit of humanity along the way. In it’s quick and finely constructed 100 minutes, we are instructed, schooled, and lead through what happened out on that oil rig far off the coast in the Gulf of Mexico that lead to the worst drilling disaster ever.  With four or five million barrels of oil spilled into the ocean over a period of 87 days, eleven souls lost, and BP found guilty of gross negligence and reckless conduct, Fondakowski has a way of keeping us fully engaged emotionally and intellectual at every moment of this well tuned play as she dissects what happened that fateful day. 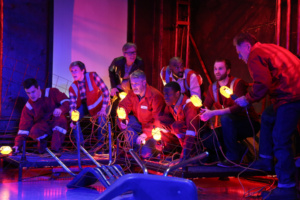 With the assistance of the Ensemble Studio Theatre/The Alfred P. Sloan Foundation Science & Technology Project (EST/SLOAN Project), an organization who’s purpose is to help stimulate artists to create work that explores science and technology, Spill resonates on so many different levels that exploring science and technology is just one of its many gifts.  The creative design team (scenic designer/dramaturge: Sarah Lambert; costume designer: Suzanne Chesney; lighting designer: Nick Francone; sound designer: Lee Kinney; props master: Claire Rufiange) all do spectacular work here, creating a compelling environment and tension within the confined space of the Ensemble Studio Theatre, along with the solid work from composer, Gary Grundei and video designer, David Bengali. The staging and utilization of the space is wildly creative and powerful. The excellent cast, consisting of the very talented Michael Cullen (Obie Award winning Barrow St. Theater’s Bug), Vince Gatton (David Johnston’s Candy and Dorothy), Alex Grubbs (EST’s Kentucky), Ronald Alexander Peet (La Mama’s Loveplay/Playmoney), Molly McAdoo (Ars Nova’s Cowboy Bob), Maurice McRae (The Public Theatre’s Wild with Happy), Kelly Simpkins (The Laramie Project), and Greg Steinbruner (Moises Kaufman’s Gross Indecency: The Three Trials of Oscar Wilde), play numerous parts with skill, ease, and clarity giving us a journey that is engrossing and upsetting.  I would be hard pressed to single out anyone from this stellar cast as all give us fully formed emotionally rich characters, much like the previously mentioned Come From Away. If there is one sliver of good that can come out of an epic disaster, it’s these two pieces of theatre.  And I hope Spill has an equally long life ahead of it.

Suzanna BowlingJuly 31, 2022
Read More
Scroll for more
Tap
The Stars Come Out For Rose: Paris Jackson, Cynthia Erivo, Andrew Rannells and More
He Says: The Play That Goes Wrong: All is Right in this Wrong