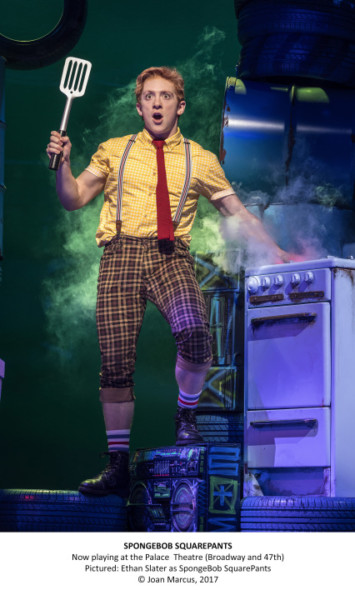 He Says: SpongeBob SquarePants – The Broadway Musical Can A Sponge Really Be Sexy?!?

He Says: SpongeBob SquarePants – The Broadway Musical Can A Sponge Really Be Sexy?!?

Ross
Wow. Who would have thunk it? That a musical based on a children’s animated television show, centered on a live square sponge living on the ocean floor would turn out to be such silly and magnificent fun. It’s difficult to imagine. Only the optimistic lead sponge that goes by the name of SpongeBob SquarePants would and could foresee such a thing. But fun and smart and festive and joyful it is. In spades. And that’s not even the half of it.
There is so much more than what meets the eye, and a lot meets the eye when entering the Palace Theatre on Broadway.  It’s a colorful spectacle that feels intoxicating and exciting before the show even begins. This is all thanks to the impossibly interesting work by set and costumer designer, David Zinn (Fun Home, Torch Song), projection designer, Peter Nigrini (Dear Evan Hansen), sound, Walter Trarbach (Doctor Zhivago), and lighting designer, Kevin Adams (Hedwig and The Angry Inch). All lead by the team captain extraordinaire, director Tina Landau (Signature’s Old Hats) who steered far away from theme park visuals and dynamics to find a place uniquely SpongeBob, and I’m sure the producers are all breathing one big sigh of relief.

In the lead, Ethan Slater (DTC’s Diner, 59E59’s PEMBAS) making his Broadway debut, gives about the best performance of a sponge that one could hope for. He’s solidly spongey, in a way that is beyond description, thoroughly engaging and wondrously talented. His voice is super strong and his stage presence is undeniable. He’s the sexiest and most appealing non-human musical theater character that I’ve ever encountered. If this doesn’t nab him a Tony nomination, I’m not sure what will, but I doubt he needs to worry.

As his best friends and neighbors in the underwater village of Bikini Bottom, Danny Skinner (Araca Project’s Pluck the Day, Broadway debut) is an absolutely brilliant Patrick Star and as Sandy Cheeks, the only land mammal to stand with SquareBob, the irresistible Lilli Cooper (OBC’s Spring Awakening) shines. It’s a strong team of friends and that musical moral, most beautifully and hilariously set forth in two rousing numbers, “BFF” (written by ‘Plain White T’s’ and “Hero Is My Middle Name” (written by Cyndi Lauper & Rob Hyman), is strongly stated throughout. These are the kind of friends who I’d love to have my back, and I’m not particular fond of shell fish.

There isn’t a rotten fish in the pot in SpongeBob SquarePants – The Broadway Musical.  Gavin Lee (Disney’s Mary Poppins) gives a star making performance in the show stopper “I’m Not A Loser” (written by ‘They Might Be Giants’) as Squidward Q. Tentacles, as does the power house singer, Joi’Len Christine Li Josey (a 2014 Jimmy Award winner, Broadway debut) as the young Pearl Krabs. The whole show is all about inclusion, acceptance, and the power of science and good friends.  Every underwater creature is playing their part swimmingly. I say this with absolutely no knowledge of the television show what-so-ever, but the characters, whether they are actually true to the television series or not (I’m gathering they are from the audience’s excited reactions) are solidly structuredand presented, especially the villain, Sheldon Plankton, evilly played by the funny Wesley Taylor (Rock of Ages).
His dastardly plot, assisted by the one character I couldn’t wrap my head around (what is she, a computer?), Karen, played with spunk and charm by Stephanie Hsu (Be More Chill), is ridiculous and supremely evil/silly, but in this musical, it doesn’t need to be anything beyond a Michael Myers/Dr. Evil plot for world domination, but under water, and concerning only the one small village of Bikini Bottom. Sheldon’s sight is small in scope, unlike this show that has Broadway domination on its mind.

A LOT of money has been spent bringing this successful marketing machine of a Nickelodeon character to the stage. The music credits alone would give any producer pause, financially speaking. With the likes of Cyndi Lauer, Rage Against the Machine, Aerosmith, Sara Bareilles, Lady Attebellum, John Legend, David Bowie and Brian Eno, the thematic idea could have been mashed up and diluted into a murky soup, but somehow, with help from musical supervision, orchestrations, arrangements, and some additional music by Tom Kitt (Next to Normal) and musical direction by Julie McBride (Second Stage’s Next to Normal), the aura has been contained and the style un-mussed. Maybe the book by Kyle Jarrow (The Wildness) helped congeal this musical hodgepodge into something remarkably cohesive. It’s no The Band’s Visit or Dear Evan Hansen, but it’s also not a Charlie and the Chocolate Factory dibacal either, not even close. Time will tell if it is a success financially, but as an artistic endeavor, they have surprised the Broadway world and hit that pineapple out of the park.