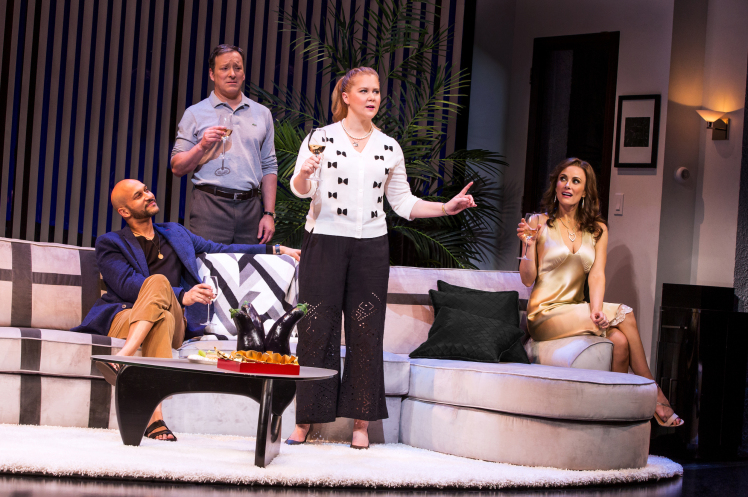 Ross
I would see the gorgeous and talented Laura Benanti do almost anything on stage. I will easily admit to that. She’s a great actress, hilarious when need be, and a musical theater genius. Just find a way to see her in Gypsy or She Loves Me (I believe it was screened on PBS before heading to BroadwayHD) and marvel at her greatest on all levels. So seeing her onstage in Steve Martin’s brilliantly funny and absurdist play about relationship survival techniques was a total no-brainer. And to no one’s surprise, she sparkles, as does the play, and like the stars, comets, and meteors shooting through space above us reflecting back brilliant light, Meteor Shower is creating a dazzling display nightly. Don’t miss the chance.

But it’s not just Steve Martin (Bright Star, Picasso at the Lapin Agile) and Benanti (Women on the Verge…) who shine. Amy Schumer (‘Trainwreck‘) making her Broadway debut, best known for her television show, ‘Inside Amy Schumer‘, and her film work is having a blast with this team of pros playing wife, Corky, squeezing out every laugh she can from the playful dialogue, to hair-raising improv’d moments, to the way she walks across the stage in her sensible high heels. She is joined in this new age marriage by Norm, portrayed by the solidly funny Jeremy Shamos (Broadway’s Noises Off), matching Schumer in timing and genuine ridiculousness as they await their abstract visitors for a night of sky-gazing at a Meteor Shower. They hear each other, feel each other, and show respect constantly, quite brilliantly, as if guided by a plethora of self help books and tapes on perfect coupledom. It’s spot on perfection. Ridiculously so.

But can they survive the onslaught of their guests, who represent all the terrible qualities of each other rolled up. The two stroll in, looking as sexually alluring and behaving as boastfully persistent as any couple could in the appealing form of Benanti and the wonderful Keegan-Michael Key (The Public’s Hamlet). As Laura and Gerald, the pair are the physical manifestation of all that is wrong in Corky and Norm’s relationship. The couple from the dark side have a plan and it is obvious from the get-go, but will it work against all that Corky and Norm have meticulously prepared themselves for?

As directed with skill and perfect absurd timing by Jerry Zacks (Hello, Dolly!, Shows for Days), this game of life and survival zip along with a number of restarts and redos all aimed at winning the game, and coming out the other end with hooks intact. But everyone wins in Martin’s play, from the gorgeous and smoothly versatile set by Beowulf Boritt (Come From Away), to the perfect costuming by Ann Roth (Shuffle Along…), excellently meteor lighting by Natasha Katz (School of Rock), and explosively solid sound design by Fitz Patton (Torch Song) while the cast delivers hilarious line after line in this trippy new play. But in actuality, we are the true winners of this night, happily taking in each deliciously wicked moment and playful asides. And yes Benanti, please wipe that liquid up because in those stunning high heels, we would be horrified to lose you to a puddle. Now that would be criminal.
For more go to frontmezzjunkies.com
Related ItemsAmy SchumerBroadwayJerry ZacksLaura BenantiMeteor ShowerNewRossSteve Martin
Broadway