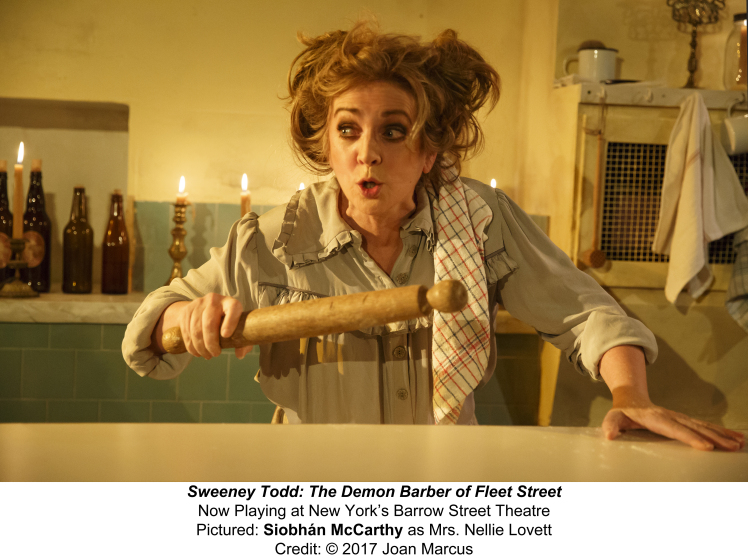 He Says: Sweeney Todd, the Demon Barber of Fleet Street: The Steaks are High

He Says: Sweeney Todd, the Demon Barber of Fleet Street: The Steaks are High 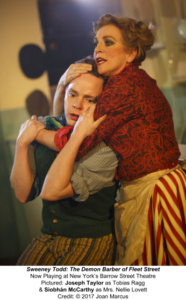 I’ve been dying of hunger waiting to see this British import of Sondheim’s Sweeney Todd, the Demon Barber of Fleet Street (here after referred to as Sweeney Todd) since first hearing about it. It sounded like so much delicious fun, performing the musical inside an actual pie shop, the 109-year-old Harrington’s Pie and Mash Shop in Tooting, London. So when I planned my trip to London last summer, my hope was to see and ingest some pie and mash. I had heard that it transferred to an unused restaurant in the west end, courtesy of Sir Cameron Mackintosh, for thirteen weeks in 2015, but once again I was thwarted. I can’t recall if it was bad timing or just plain ‘sold out’, but regardless of the ‘why’, I missed it. So I was thrilled last year to hear that it was coming across the pond and setting up shop at the Barrow Street Theatre. Not exactly the pie shop I had envisioned but regardless, I had to make sure that I was there this time. I wanted those Hot Pies. 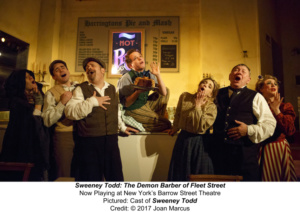 Sweeney Todd is one of my favorite musicals of all times, and is in the top five theatrical experiences I’ve had. Right up there with Sunday in the Park with George (which I was lucky enough to see a few days prior to my visit to Sweeney Todd – what a great Sondheim week I’m having). Just like my mad affection for Jenna Russell in Sunday, I carry the same torch for Patti LuPone and Michael Cerveris who both dazzled in the John Doyle directed 2005 revival. Those two were magical; precise and delicious in every way in that stunningly unique production. So the stakes (or should I say, steaks – as food metaphors will be plentiful in this review) were high, and this delectable troop, made up of four of the original British players and a sprinkling of Americans thrown in for flavor (or union requirements) had a lot to live up to. 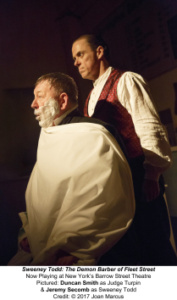 Delicious is the first word that comes to mind. Piping hot and tasty is this inventive revival, transported, not for life, but for a pretty much sold out run in the revamped Barrow Street Theatre. The oldest pie shop in London has been recreated within the very flexible walls of this west village theatre (designer: Simon Kenny; lighting: Amy Mae; props: Ray Wetmore). Every inch is said to look just like the original, except the seats are a bit more comfortable, so says Joseph Taylor, one of the original Tooting Arts Club players who followed this meal ticket to NYC. He joined us at the head of our table just as the show was about to start, chatty and adorable. He certainly knows how to welcome us into this establishment. We did not join in for the pre-show pie and mash that was being offered, but a few beers seemed appropriate going in, just a shame they were from Brooklyn, not England. 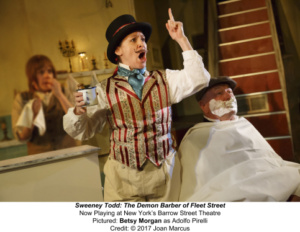 Once the lights go out with a bang, the show kicks in with full force. From the first note sung, we know we are in for a solid fantastic meal here. It’s a small bare to the bones cast, each player has a significant role, but together with the three-person band (music director: Matt Aument: music supervisor and arranger: Benjamin Cox), these folk sure know how to fill up the room with song and movement.”The Ballad of Sweeney Todd” has begun, in full fledged aroma. Spectacular and exciting. As precisely directed by Bill Buckhurst (choreographer: Georgina Lamb), this production is filled to the brim with great voices, creativity, and a perfectly cast group of actors. Not one bad ingredient in the lot. 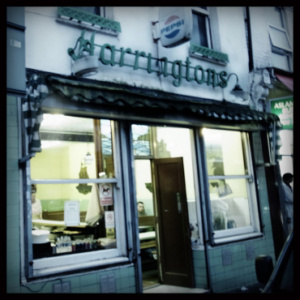 Jeremy Secomb as Sweeney Todd, the namesake of this bloody show has just the voice and presence to command the space and creep into our nightmares. He’s scary and strong, loud and frightening in his thirst for revenge. He’s funny when needed to be, but when he tells you to move, you won’t hesitate, and I dare you to avoid his glare. My dinner companion could not, and he has the goose pimples to prove it. His rendition of the hauntingly savory “Joanna” as he slices his way through his customers stays floating around in my head ever since. 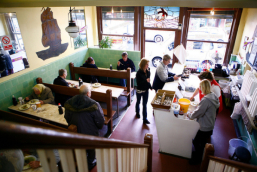 Mrs. Lovett, one of my favorite Sondheim creations, played to vaudevillian perfection by the spectacular Siobhan McCarthy, has just the right amount of spice and humor. She nails every nuanced line and every note, in the scrumptious “Worst Pies in London”, playing with Sondheim’s tricky and fun words with the joy they deserve. Like the fine baker she is, she serves up her hot pies with pride and relish. Outrageous and devilish, she’s the perfect side dish to Secomb’s meaty main course named Sweeney. 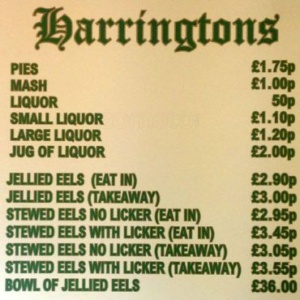 Our initial dinner companion, Taylor, as I expected, played Tobias with all the forlorn charm, glee, and innocence needed. He seems to be having the time of his life as he ushers us back into the pie shop after the interval. The beautiful song “Not While I’m Around” carries all the naivety and deceptive power required by the Mrs. Lovett and Tobias. He and the others all do impressive work in Sweeney with each and every one of those savorous Sondheim numbers. The young lovers (the ever so handsome Matt Doyle and the exquisite Alex Finke) are glorious and a wee bit crazy. The lovely and funny number “Kiss Me” plays joyfully with the theatricality of young lovers falling madly and deeply in love at first glance which Joanna giddily acknowledges when she sings that she doesn’t even know Anthony’s name. 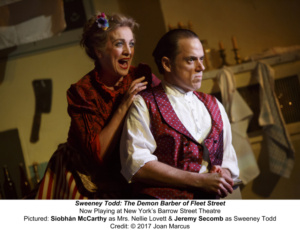 The Judge Turpin (an impressive Duncan Smith) is perfectly cast, with the strong voice to go with the imposing frame. Brad Oscar as his side kick in menace, Beadle Bamford, leans a bit too close to a Nathan Lane impersonation at times which didn’t give him the menacing demeanor that the part requires, but the whole production leans towards a vaudevillian feeling that was entirely engaging and festive. Betsy Morgan as both the Old Woman and the shady barber, Adolfo Pirelli, gleefully bounces back and forth and beyond, serving up an impeccable performance each and every time she appears, and god, what a voice she has. 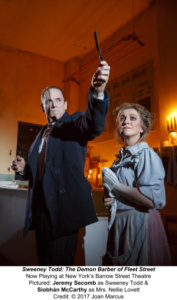 The whole production is more fun and startling, rather than dark and moody which works so well in the environmental set-up.  The Barrow Street/Barrington Pie Shop space works surprisingly and delightfully well, easily shifting for each scene needed. It’s an inventive and creative use of space and dynamics, that only starts feeling a tad bit forced in Act II when the bodies begin to pile up in the bake house downstairs. It feels a bit clumsy but by then we are all so giddy with joy that we are totally willing to brush that aside and take it all in happily. This piece of hot pie sliced by a demon barber went down amazingly well. It is the best pie in town, and if I could get another ticket, I’d go back for a second helping. 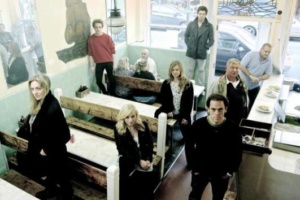 RossNovember 16, 2022
Read More
Scroll for more
Tap
Opening Night With The View UpStairs
He Says: All the Fine Boys: And One Fine Girl