He Says: The Cake is MTC Sweet but Under Baked 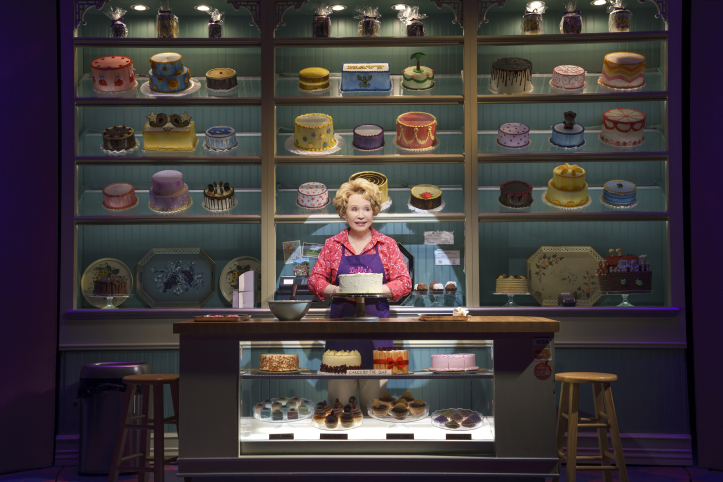 He Says: The Cake is MTC Sweet but Under Baked

It’s a sweetly baked kind of issue play, sifted with enough laughs and winks at the audience, that the conflict, ripped from the political headlines of the day, doesn’t feel that heavy or overstuffed. But sugar, as one of the characters states quite rightly, is both addictive and dangerous to our health, and when just a little too much is added, as it is in Manhattan Theatre Club‘s off-Broadway production of Bekah Brunstetter’s The Cake, the important issues of equality and human rights becomes cute and dishearteningly charming, easily to brush off and forgotten at the end of the day. The topic has complexity and weight, and the playwright valiantly tries to present the conflict with humanity and heart in the form of Debra Jo Rupp. It succeeds, mostly, as a comedy of character and Southern hospitality, in all its different shades of kindness, bigotry, and colored frosting, but ultimately, this devilish dark angel food Cake is not substantial, nutritional, or delicately and intrinsically tasteful as a slice of political commentary should or could be. It leaves us hanging a bit, buzzingly high on sugar, but not satiated or enlightened.

Solidly staged with comic sharpness by director Lynne Meadow (MTC’s Linda) on an elaborate, although oddly side-heavy set designed with artificial flavoring by John Lee Beatty (Broadway/LCT’s Junk), with spot on lighting by Philip S. Rosenberg (Broadway’s Pretty Woman), and strong original music and sound design by John Gromada (Broadway’s Torch Song), Brunstetter (The Oregon Trail), this comic commentary frosts his sweet confection mainly because of the wonderfully fun Debra Jo Rupp (Broadway’s Cat on a Hot Tin Roof). Rupp dutifully and joyfully plays Della, a effervescent and joyful baker of cakes, who comes face to face with a moralistic dilemma that plasters her in between love and religion like icing on a two layered cake.  The set up is straight from the headlines of our current news cycle and Supreme Court ruling, with Della basking in her cake shop, excitingly recounting the news of being invited to be a contestant on the American version of that famous British Baking competition show. Della is bubbling old school at its finest, breathing in the tried and true ideals of following baking directions precisely with the exact right amount of cheer and joy sprinkled on top.  It’s a delicious and delightful characterization, pulling us in with her enthusiastic kindness, even when she comes up against the sugar-free and gluten-free savvy of the well connected Macy from New York City, played with passion by Marinda Anderson (Public’s Teenage Dick), Della’s sunny edge is flummoxed but not dimmed by Macy, even when the young woman won’t take one bite of the delicious looking speciality sliced out for us all to desire with mouth-watering hunger. It’s astounding to all that she can restrain herself, but it’s a tried and true setup, this collision of opposites, that is just waiting for the timer to ring and the bite to be taken.

It’s only when Della, dressed to cute perfection by costume designer Tom Broecker (MTC’s Our Mother’s Brief Affair), comes face to face with her good friend’s daughter, the sweet faced young Jen, well played by Genevieve Angelson (Broadway’s Vanya and Sonia and…), that the conflict of The Cake is fully presented in all its topical, although somewhat stereotypical, glory. “How is arguing a skill” she asks, but when Jen returns home from NYC to plan her wedding, a social debate centered on “fallen women” and gay marriage is set in motion. Jen wants to get married exactly in the “full fat” kinda way she and her recently deceased mother always had dreamed of, with Della making the wedding cake surrounded by all their friends and family from her small town Southern upbringing. The part that wasn’t foreseen was that the other half of the wedding party is not a man, but Macy, a black lesbian woman who just can’t understand why Jen is willing to put up with and brush off the small town homophobia that Della serves up on a pretty dessert plate. Della isn’t alone in her religious stance, she gets a strong bigoted assist from her husband, Tim, played wisely by Dan Daily (Mint Theatre’s Days to Come) who has a few issues of his own to contend with, sexually speaking. That side bar is illuminating, but oddly unimportant to the center aisle, and if the playwright is trying to make an even comparison, that leaves an even more bitter taste in my mouth. It’s bad enough that the two lovebird ladies have to sleep separately at Jen’s cousin’s place, a plot point, like many others, that doesn’t quite feel authentic with the politically savviness of Macy’s character, but to keep coming back for more, regardless of how good that cake is, begs a few bigger questions for Jen and the problematic artificially sweetened scenario.

The voice of the Baking God (also Dan Daily) is at first festive and fun, leading us down an inventive aisle with a skip and a smile, but quickly the schema becomes over-baked and pointless, just like the heterosexual discombobulations that distract from the real battle of folding dry with the wet as directed to get full flavor and rise. It’s clear Brunstetter, who is one of the producers on NBC’s “This is Us“, wanted to give us something funny and engaging while also delivering strongly on the goods, but he ends up baking and serving up the equivalent of a funny sitcom-worthy treat, full of sweet hop up and down smiles and laughs without any solid layers or structured thought. It fails to do the dynamic and topical recipe justice and is, in a way, a disservice to the true flavor of LGBTQ rights and bigotry making the key ingredient such an adorable character. Rupp, who is delightfully perky just like her solid work on “That 70’s Show“, is the perfect baker to mix and fold the ingredients together, bathing in her smiling child-like stance and serving up complicated confections without adding any complex calories for content. “You can’t pick and choose the bible” which is something that could be said to all, and although Della is quick to admit to watching and liking “The Birdcage”, she gets off the hook with relative ease blinding us with her perkiness to the darkness of the cake served. She gives the most authentic moment with her ‘wanting‘ speech, but within this conflict, the answer remains allusive and somewhat discarding along with the broken layer that dropped on the floor.  I must admit it would feel too artificially sweet if The Cake ended with a kind super-positive life-affirming flower creation on its one layered top level, but the comedic play also shouldn’t conclude as complicated as a Supreme Court decision. Brunstetter tries hard to find a balance that serves up understanding without selling out to the sugar high. She almost succeeds, but with the last mouthful, I didn’t feel satisfied nor did I feel hungry for more. The empty calories of The Cake left a slight artificial aftertaste in my mouth that I couldn’t quite get rid of as quickly as I would have liked. Even with a quick cup of Della’s Maxwell House.