He Says: The Cher Show is Fantastically and Exactly What the Variety Show Hostess with the Mostest would have Ordered 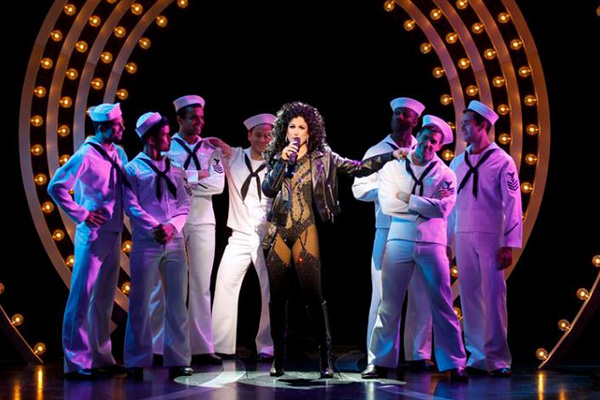 He Says: The Cher Show is Fantastically and Exactly What the Variety Show Hostess with the Mostest would have Ordered

Over the New Year celebrations in New Orleans, one of my friends had downloaded the new Cher album of ABBA covers, and the result was something akin to a palm slapped to the forehead. Something along the lines of, “Why was this not done years ago? As it is just perfect and AMAZING!!” Because, to be frank, Cher sounds just “Fernando“-awesome and perfectly aligned with the material. It made me think about all those fantastic moments on YouTube that pop up here and there on FaceBook plucked from her 1975 variety show, “Cher” showcasing her musical adaptability and versatility, singing songs from a variety of singer/songwriters like Elton John, Better Midler, and the Osmond Brothers.

The show ranked 1st among all variety shows and 22nd among all programs in its first season, while also receiving the most fan mail of any CBS program at the time. She seemed to be able to sing anyone’s song, with any singing partner, elevating it up to a whole new level, surprising us all with her confident talent and her iconic sound. But the other memorable thing from that show, and the 1971 “The Sonny & Cher Comedy Hour” is exactly the thing that Broadway’s The Cher Show adeptly and most successfully recreates; her signature brand of flippant and irreverent sense of silliness and humor.  It was never masterful like “The Carol Burnett Show” but it had a quintessential innocence and sassy bite that only a hair-flipping Cher could pull off with such ease and affection, and wisely The Cher Show‘s creators held on and infused this jukebox show with that same casual irreverence, playing homage to the icon with both sparkly style and fun.

This is the very (high cheek) bones of The Cher Show, and as directed with a smart quick style by Jason Moore (Avenue Q) the jukebox musical chronicling the singer’s rise to stardom entertains to the tenth degree.  If you go into the Neil Simon Theatre expected something deeper and darker, I don’t know what to tell you because you obviously have no idea who Cher is and what she stands for. It’s smart storyboarding, taking us through the six decades of Cher like we are flipping through a biographical picture and songbook magazine while sipping on a glass of champagne. It’s frothy and bubbly, and makes not attempt for poignancy, in the way Cher must have wanted it, and chaperoning us with a wink and a smile is the magnetic and majestic ‘Star Cher‘ delivered spectacularly by the fabulous Stephanie J. Block, the best thing in Broadway’s Falsettos. She delivers something so spot on perfect that I had to keep reminding myself that this was an actress playing the icon, and not the other way around (or maybe it is as well).  Block is the iconic woman, in every grin, flip, strut, and song, and together with the in between ‘Lady Cher‘, enacted strongly by the talented Teal Wicks (Broadway’s Finding Neverland), and the young glorious ‘Babe Cher‘, brought to spectacular life by the talented Micaela Diamond (NBC’s “Jesus Christ Superstar“), the three aspects of Cher intermingle in a surprisingly entertaining and enlightening way, guiding us by handing off tasks to one another like ego-free relay racers passing the mic-baton, “Step aside, I got this“.  And do they ever, as they are more than just different ages of Cher, but also different parts with different strengths, and within that concept, these three stars combine with such stellar ease that we happily run along behind their sashay, thrilled that Cher isn’t allowing this to be something as dull as that more straight-forward Summer treatment that derailed the other icon jukebox musical.

In the most spectacularly designed costumes by the legendary Bob Mackie (Broadway’s Moon Over Buffalo), with special kudos to hair and wigs by Charles G. LaPointe (Broadway’s Hamilton) and makeup by Cookie Jordan (Broadway’s Once on This Island), a young girl by the name of Cherilyn Sarkisian, born May 20, 1946, with the beautifully voiced maternal guidance of Ma Georgia Holt, gorgeously portrayed by Emily Skinner (Broadway’s Prince on Broadway), fights the taunts and snide jokes thrown at her daughter by high-schoolers to the profound rhythm and drum of “Half Breed“. And with the help and hand-holding of the surprisingly dashing Sonny Bono (ok, hold on… who knew that under those synthetic outfits, one hot bodied stud existed, at least that’s how it’s being showcased here as portrayed perfectly by the well toned and chiseled – both physically and vocally – Jarrod Spector of Broadway’s Beautiful, Les Misérables), a unique and singular star was in the making.  “I Got You Babe” never sounded so profound and well-produced as it does in The Cher Show, just like all her other pop hits. They aren’t Sondheim or even Carol King, but as crafted together within the flimsy but fun book by Rick Elice (Jersey Boys), each make a point reflecting on the life and legend of this shy young woman who now many commonly refer to as the Goddess of Pop. And that is no stretch of the imagination.

Moving fast and furious through the years, The Cher Show parades with panache the likes of Bob Mackie & Robert Altman, deliciously portrayed by Michael Berresse (Broadway’s [title of show]), bagel boy Rob Camilletti, delightfully played by Michael Campayno (Broadway’s Wicked) getting a quick and noble nod, and the handsome Gregg Allman wonderfully strutting forward in the beautifully shaped body of Matthew Hydzik (Broadway’s Side Show), each like a special guest star on the television Cher Variety Hour.  It’s great fun, full of surprisingly honest details with some others that feel a little too squeaky clean and polished, but even with those cries of “I need to spend more time with Chaz“, the hits keep coming one after the other. The quick smart and silly jokes and asides fly fast and furious, layered in between moments of pop music magic, thanks to the musical supervision, orchestrations and arrangements by Daryl Waters (Broadway’s Shuffle Along), music coordinator Dean Sharenow (Broadway’s The Band’s Visit), music director Andrew Resnick (Broadway’s The King and I), and dance music arrangements by Zane Mark (Broadway’s Pippin). It’s sharp and solid, reflecting the incredible popularity of her hit parade, surrounding a story that has more ups and downs than a roller coaster.  Who knew? I know I didn’t.

The Cher Show, with the astonishing Block as tour guide and hostess with the very mostest, is a show to truly “Believe” in. Even during the “Sweet Charity“-esque movie role mash-up, danced and sung with Fosse-like precision and style by the sparkling Diamond, this frothy musical marathon never gets tiring, or anywhere close to being dull.  From her vintage television show performances, her sassy and lovable Bono short jokes, to her wild and wonderful costumes, lovingly recreated and paraded out like a 1970’s version of that iconic fashion show that arrived midway through the classic 1939 “The Women“, I knew walking in that The Cher Show would be a good time. What I wasn’t prepared for was the sexy sassiness of the show and the sweet smartness of the three Chers, especially Block and Diamond, who are totally “Strong Enough” to rock that Cher humor and sound so solidly well that if the real Cher had showed up, I’d have a hard time hearing the difference.  Broadway snobs beware. This isn’t Sondheim, but it channels the very pop essence that is Cher, “Turning Back Time”, reveling in the joke-telling pop-singing hair-flipping tongue in cheek legend that enthralled us all for decades. You Haven’t Seen the Last of Cher Yet.

Adam Pascal and Anthony Rapp Celebrate 20 years of Friendship
BroadwayCon and You are There With Ilana Levine, Anthony Rapp, Donna Murphy and Melissa Errico