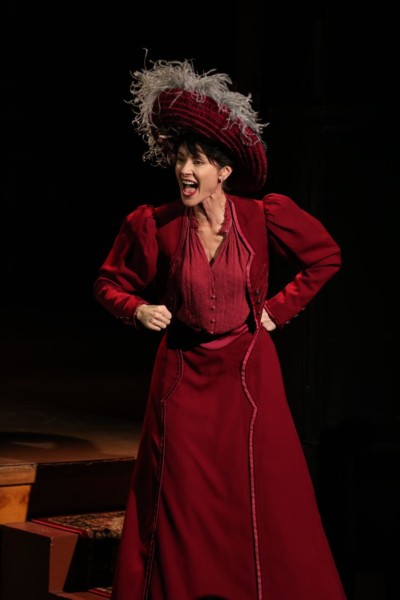 It was a big musical Sunday for Frontmezzjunkies last weekend. After being wow’d by an old time dark and delicious revival of Mack & Mabel at New York City Center Encores!, I went straight downtown to Abrons Arts Center to see another fantastic revival, the bright and brilliant The Unsinkable Molly Brown. It’s a 1960 Broadway musical that opened at the Winter Garden Theatre on November 3, 1960 and closed after 532 performances on February 10, 1962. It starred Tammy Grimes, Harve Presnell, and Jack Harrold, with the delightful and melodic music and lyrics by Meredith Wilson (The Music Man) and a fascinatingly fun book by Richard Morris (Thoroughly Modern Millie). The Transport Group has grabbed hold and dived into the fictional account of the life of Margaret Brown and gifted Michael Rafter (Broadway’s Violet) the task of giving it a slight update alongside the phenomenal Dick Scanlan (Whorl Inside a Loop) who is credited with book and new lyrics. Margaret (just call me Molly) Brown, played to spunky perfection by the magnificent Beth Malone (Broadway’s Fun Home) is surrounded immediately and most deliciously by a solidly talented pack of young miner men. Climbing up the ladder, Molly establishes herself strongly in the hearts of the whole town she wandered into, almost by accident. “I Ain’t Down Yet” she states. And we totally see that this woman, and this fantastically talented actress, will never be down for more than a minute or two. First told that she was ‘bad luck‘, particularly strongly by captain miner man, J.J. Brown, beautifully portrayed by the richly voiced David Aron Damane (CSC’s Carmen Jones), the tide quickly turns, explosively, and under the protective wing of widow Julia, gorgeously sung by Whitney Bashor (Keen Co.’s Ordinary Days), Molly finds her place in the wilderness and gets her wishes granted, one after the other.

Directed with an eye for fun and pleasure by the impeccable Kathleen Marshall (Broadway’s Anything Goes; In Transit), with magnificent and fun dance arrangements by David Chase (Broadway’s Kiss Me, Kate), The Unsinkable Molly Brown floats high above all expectations. “Belly Up to the Bar, Boys“, they sing, and with a delectable trio of Saloon dancing girls, and a barber shop trifecta, made up of Alex Gibson (Broadway’s SpongeBob…) as Erich; Omar Lopez-Cepero (Broadway’s American Idiot) as the adorable Vincenzo; and Paolo Montalban (Broadway’s The King and I) as Arthur, the piece is as joyful and rich as Molly and her husband become. On a solidly strong, beautifully cracked, and ever evolving set designed by Brett J. Banakis (Broadway’s The Cher Show), with festive fun costuming by Sky Switser (Cape Playhouse’s Art) [Paul Tazewell (Broadway’s Hamilton) is credited with designing Ms. Malone’s gown], distinctive lighting by Peter Kaczorowski (Public/Broadway’s Sweat), and a solid sound design by Walter Trarbach (TG’s Broadbend, Arkansas), Molly Brown flourishes, never taking that smile off our collective faces. Better than a Washboard Music Festival, the production is pure pleasure and talent, rolled up and Gold plated for success.

Molly Brown is a firecracker of a character, and Malone finds every chance she can to charm us with her magnificence, always finding a way to stand up to Denver snobbery and “The Sacred Thirty-Six” dismissal, even when trapped in a lifeboat. She’s a trailblazer who always supports those in need of some help, whether it be striking union-seeking miners, Titanic survivors, or just the hungry and the poor of wherever she finds herself. She finds a way to “Share The Luck“, most wonderfully backed by music director Joey Chancey (Broadway’s An American in Paris) with strong orchestrations by Larry Hochman (Broadway’s The Prom). We feel as lucky as those who are in Molly’s Lifeboat No. 6 when she most famously survives the sinking of the RMS Titanic (I see and applaud you, Kathy Bates. Your depiction will never fade from my Titanic memory). Molly returns home stateside only to find more and more reasons to stand proud and strong. “I’d Like to Change Everything About You“, she and her loving husband sweetly sing, but in regards to the Transport Group‘s production, I wouldn’t touch a thing. So never say no to this show. “Are You Sure?“, some may ask “Just Becuz“. “If We Can-Can“, we will, is the only answer.