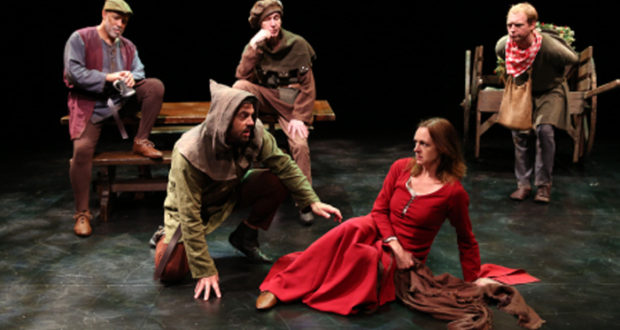 He Says: The Duke’s Got The Saintliness of Margery Kempe Playing Ping Pong on Their Stage

He Says: The Duke’s Got The Saintliness of Margery Kempe Playing Ping Pong on Their Stage

“Morality! Morality!” screams Margery Kempe, the main player in this game of ping-pong currently being performed at The Duke on 42nd Street, courtesy of the Perry Street Theatre Company and Jonathan Demar. She wants to be thought of as a remarkable woman. She keeps striving for recognition like many a teenage girl on YouTube, desperate to be seen as something special and deserving of our attention. She yells and yells to be admired, but it usually doesn’t work out that way in the end. And as written by John Wulp (a Tony Award winner for his production of Dracula), Margery falls into that trap.  She doesn’t wants her life to be defined by the men and the society that surrounds her. She wants to be the leader of her own story, and have her life constructed by her own grandiose actions, even if she has to create a few stories and tell a few fibs to get there. Unfortunately, the people around her don’t quite see it through the same lens.

It’s a play about a woman’s journey, somewhat misguided and driven by narcissism with a powerful need to be seen as someone special, but it can also be viewed as a journey of discovery, one where she seeks enlightenment only to find her way back to what she tried so desperately to leave behind.  My theatre companion described it as something akin to a 14th Century Wizard of Oz, but the Wicked Witch resides inside her own mind and ego, causing her distress and tempting her as she makes her way. She spiritually bounces to and fro between a superficial and self fabricated desire for saintliness and the deep pull of sin and godlessness with such obliging rhythm that it starts to feel like a tennis match with both players playing strongly but undramatically from the baseline, volleying the ball back and forth without anyone really taking a risk of surprising the other with some new tactic. I’d say it’s a two note play, with the one note delusional and schizophrenic lead challenging a more consciously fabricated Joan of Arc on one side of the net against a devilishly desperate soul on the other.

This production wants to do something big and bold, just like the apprentice Saint Joan-like woman at the center of this somewhat odd morality play. As portrayed with fire and brimstone by the compelling Andrus Nichols (Bedlam’s Sense & Sensibility), the production starts out wisely and with a modern swing at simplicity and sensibility, bathing quite well in its goodness and beauty, two things that don’t always go together, so we are told. She’s compelling and dangerously alive in the role, but as we drive forward, the back and forth swinging nature of her assurances makes us wish for a deeper investigation into the internal conflict of her psychology, which would have made for a more exciting game. It falls into a repetitive creation that causes disengagement as everyone starts to see through her guises with ease. It’s a solidly performed game though, good players, these people in this Middle Ages town, enacting numerous parts at a drop of a hat. With an odd assortment of characters such as Pegasus (Thomas Sommo), Dame Rumor (Pippa Pearthree), Mistress Wishful (Ginger Grace), Patience (LaTonya Borsay) and Gambol Sheets (Timothy Doyle), the cast, all working together strongly, do fine work, especially the handsome and layered Vance Quincy Barton as ‘The Man in Black’ (among others), and Jason O’Connell (Primary Stage’s Pride and Prejudice) as John Kempe (among others), the confused and pained husband of this 14th Century special lady.

The Saintliness of Margery Kempe, when first produced at the Poets’ Theatre in Cambridge, MA, won a Rockefeller Grant and upon finding the text from this production, the director Austin Pendleton (Broadway’s The Little Foxes starring Elizabeth Taylor and Maureen Stapleton) was inspired to dive in and resurrect this comical and timely play into something more contemporary and possibly profound.  Saintliness… follows the true-life (mis) adventures of Margery Kempe (c. 1373 – after 1438) the famed English Christian mystic known for writing through dictation The Book of Margery Kempe, a work considered by some to be the first autobiography in the English language. Is it a miracle, this creation, or something more deaf and blind to the glory it pretends to portray? Either way, it bounces back and forth, from farce and fun to tiring and long.

Within the book and this wild adaptation for the stage, Margery Kempe chronicles her internal struggle for clarity and explanation in regards to her self-described conflicts and mystical conversations with God. She leaves her husband and her children (six in this play, although history says she had fourteen children) and begins a voyage of self-creation and discovery on foot, throwing her lot in with the Devil and buying a brewery from a stranger by the name of Tubbs (Michael Genet). When this venture doesn’t exactly work out the way she expected, she decides that if sinfulness won’t sell bad beer, than it might be much better (and easier) to gain stardom by become a saint, although she has none of the attributes. But as luck would have it, a square rock and a beam of wood grants her momentarily the title, resulting in a righteous pilgrimage to Jerusalem and Rome, much to the distress of all involved.

It’s a wildly amusing farce that is created here, for the most part, staged on a sparse but centered set designed by the playwright himself, with lighting by Jennifer Tipton (Wooster Group’s The Room) and Matthew Richards (Curvy Widow), costume design by Barbara Bell (Irish Rep’s It’s a Wonderful Life), and original music and sound designed by Ryan Rumery (MCC’s The End of Longing). But it doesn’t seem to spiral or slice too far from the same path it holds on to for over two hours. Too much explanation and not much variety in its conflict leads to a long tennis match of godliness, one that loses its funny premise early on, and the game just falls flat after that.

He Says: On A Clear Day Flourishes High into the Sky and the View is Glorious
To Kill a Mockingbird Stratford Style