He Says: The Flea Gives Us Some Heavy Scraps to Chew On 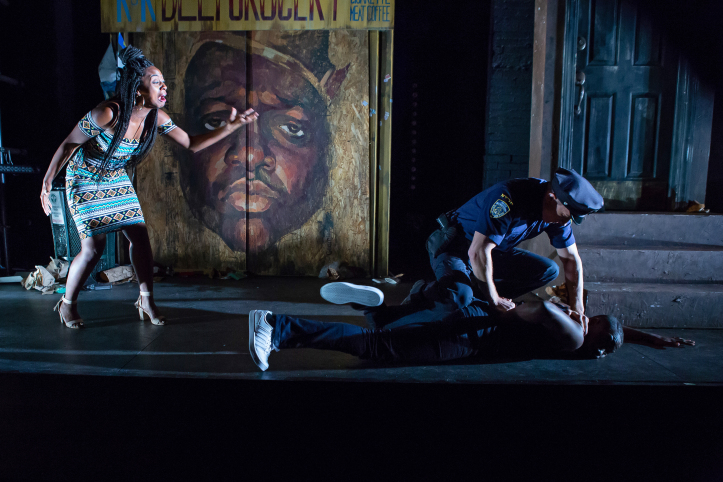 He Says: The Flea Gives Us Some Heavy Scraps to Chew On

Buckle yourselves in, and prepare to to get a full forced beat down of the African-American experience in New York City. Hand cuffed to these troubled times, The Flea Theater’s Scraps is a strongly worded debate on the aftermath of a fatal Police shooting of an unarmed man, high school athlete with NFL potential, boyfriend, and father, all rolled up together into one infamous young black man.  It’s a sharply drawn piece of writing by Beraldine Inoa (AMC’s ‘The Walking Dead‘), that engages quite purely and authentically with the issues of our times throwing ideas of fault around in a surprisingly pain-filled manner. It resonates, powerfully, particularly in the way it pivots around the #BlackLivesMatter movement; well, at least for the first half of this 100 minute one-act play.  The second half is a whole different kind of play, knocking us off the actual steps of their home and turns it around on us. After a slow motion and disturbingly gagging decent into darkness, pummeled with fear, destruction, and violence, the timely play throws us quite abstractly into a complex gameshow of sorts, focusing on the sad and real curiosity of a fatherless 8-year-old black boy (Bryn Carter) who desperately wants some answers to his important questions.

The story brings us directly to the steps of a Bed-Stuy building, the focal point of this observed portrait of anger and remorse, designed with a strong sense of the time and the place by Ao Li (Yale Rep’s Kiss), with exacting costumes by Andy Jean (Trinity Rep’s Othello), clear and precise lighting by Kate McGee (Sinking Ship’s A Hunger Artist), and strong sound by Megan Deets Culley (NYTW’s Terminus). Drawn in by the poetry of Jean-Baptiste, played solidly by the wonderfully intuitive Roland Lane (BET’s ‘Brooklyn. Blue. Sky.‘), he paints a picture of the pain and death that lingers around those steps and sidewalk over by the bodega. He’s intense and demanding of our attention, deservedly so, just like this play is worth taking a knee for. Then, casually as if he expects a hero’s welcome, in walks the out-of-place Calvin, played intrinsically by Michael Oloyede (Flea’s Inanimate), looking like he just stepped out of the pages of British GQ. He’s a neighborhood boy who found his ticket out via Columbia University, returning home for a much overdue visit. Fresh from a few months abroad with his fancy college roommate, the welcome he gets is anything but warm, but it does dig deep into the complexities of community, loyalty and the connection to the hood and its culture. It’s profoundly balanced and fascinatingly deep, especially when you add in the girl of Calvin’s dream, Aisha, beautifully portrayed by the talented Alana Raquel Bowers (The Brick’s Twelfth Night or What You Will). Her two-handed dynamic scene withJean-Baptiste vibrates with tension and predicaments, in the same but uniquely differing way her interaction with Calvin ratchets up and out with a thick slice of fear, anger, and frustration steaming up from their place, situation, and time.

The mistrust of each other and the powers that be are exemplified most dramatically when pajama wearing Adriana, dynamically well-played by Tanyamaria (Flea’s Locked Up Bitches) steps out for an early morning cigarette. She connects to her friend Jean-Baptiste and his attempted journey forward in an uncomfortably looking suit and tie, finding community in their shared escape plan into the pages of literature. There’s joy and compassion for one another, almost directly followed by bitterness and blame that points its way both inward and out. The mourning is not complete, nor might it ever be, as the world they live in, showcased in a harrowing scene with Andrew Baldwin (The Brick’s Taming of the Cats) as an aggressive Agent of Power happens by at a moment when the joy and the memories are at their highest. The slow movements works wonders, and combined with the following tragic scene centered on Adriana, the desperation they live in is complete and unmistakable.

The problem of the piece is the shift in tone from the dynamic and well performed poetic realism of the first half to the demented nightmare of the gameshow segment. Let me rephrase that: The problem for me was the tonal shift, although it’s done with a clear and purposeful perfection by both director Niegel Smith (PH’s Hir) and the playwright. Bryn Carter (EST’s Asking For Trouble), plays the young Sebastian with an abstract perspective of innocence and wonder. The character stands proud like the big boy that he is, but he is weighed down with the fear and uncertainty of a child at the center of a whirling storm. The performances of all the players are excitingly precise and strongly orchestrated within an authentic and abstract flair but as written, the over arching theme feels distant and not as connecting as the real life struggles presented in the first half. It lost some of its underlying violence and unsettling perspective, and reverted into a convoluted piece of poetry whose meaning is muddled somewhere inside its clever wordplay. We make do with these pieces though, in the same way they made soul food from Scraps, because the war rages on and the number of casualties increases. People are dropping like flies in this game of chances, and Inoa has a great deal to say about this topic. Her thesis is clear and timely, but after the tragic gagging scene, Scraps loses its connection to inner emotional depth and its deserving power.